Stanley Jordan and the Sounds of Three Hands (or No Hands), Tapping 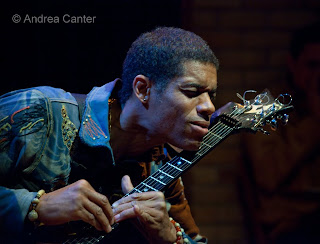 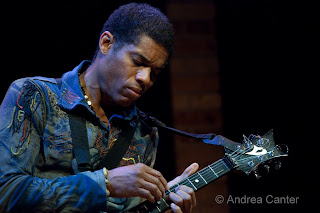 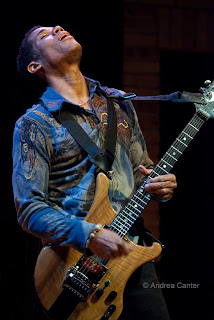 Stanley Jordan came to down Sunday night, literally moments behind the birth of his granddaughter. “I’m in a great mood tonight!” he told the Dakota audience. He had been present for much of the birth before heading to the airport for his flight to Minneapolis, getting the word “she’s here” just before boarding. Not that he needed any additional source of inspiration for his solo guitar evening, but surely it was icing on the cake. Or a few more dazzling notes on the fretboard.

I caught the second set. On the way out, friends who had been at both sets noted that the two programs were totally different, the earlier set more funky, the second more mellow and classically informed. “He didn’t play Mozart earlier.” Maybe not, but I bet he played Bach all night. Bach has long been cited among jazz improvisers as the ultimate source of variation in chord progression and harmony, and Sunday night, Jordan seemed to be living proof. Behind every intricate, multi-layered journey lurked the remnants, or even the more overt manifestation, of toccata and fugue, counterpoint and variation.

Stanley Jordan came to fame with a new way of generating sound from the electric guitar, a process known as “tapping.” Just from the observer’s viewpoint, “tapping” appears to refer to the way the fingers on both hands, particularly the right hand, attack the fretboard –not so much via strumming or the usual plucking but by tapping fingers on strings, almost like playing a keyboard. Using the same process with the left hand provides another keyboard; thus notes are often generated from both hands simultaneously. It’s like playing two guitars. Which I think Stanley could do anyway, given his skill at simultaneously playing guitar and piano.

Stanley Jordan also uses his face to generate music. Every note is visible in his facial expressions. But even more literally, he augmented “Eleanor Rigby” with his chin, using it as a third hand on the fretboard. Did I mention Stanley is a contortionist? It’s an essential skill when you apply certain body parts to musical instruments. Somehow he makes it seem totally natural, not a novelty act, just another indication that music is a body language.

During the late set, we were treated to a wide range of source material, from original compositions from his State of Nature release to the slow movement of Mozart’s "Piano Concerto #21" to a highly syncopated “Autumn Leaves” to the Baroque improvisation that emerged as “My One and Only Love” and of course his Lennon and McCartny encore, “Eleanor Rigby.” But Bach was always present, the electric guitar emulating harpsichord, piano, lute, mandolin.

Two compositions were do-it-yourself duets, guitar and piano, starting with solo piano that was a direct reflection of his guitartisry – intricate, contrapuntal, thick voicings but lacy lines. Then the duet, left hand on guitar, right hand on piano…. Then switch, bass notes from piano, treble from guitar. Add vocalization and Jordan was a trio. The harmonic variations moved the feel from East to West, landing somewhere in Spain amidst a sequence of tumbling cascades. At some point he suggested Chopin on steroids, Granados meets Tyner. Gestures feed the music—on “Autumn Leaves,” his shifting posture mimicked a horseback rider, leaning back with one hand on the reins. And sometimes, that carefree toss of a hand, tilt of the guitar, the big smile seemed to say “Look Ma, no hands!” Indeed, at times it seemed that Stanley Jordan needed to merely look at his strings to coax the ever-willing music.

Photos: Stanley Jordan, at the Dakota Jazz Club on January 9, 2011 (photos by Andrea Canter)
Posted by Canterjazz at 5:28 PM