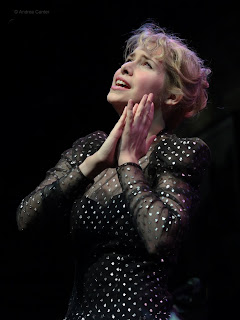 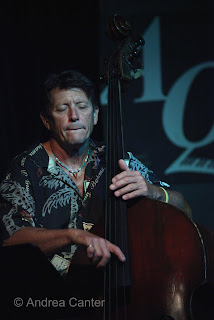 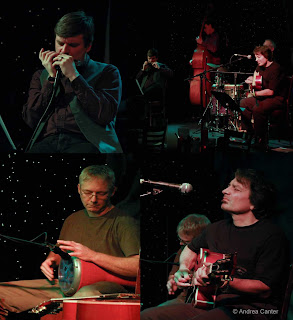 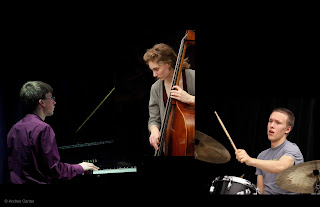 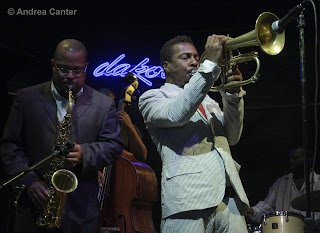 The coldest weekend yet… but the music will be plenty hot, with the irreverent Nellie McKay at the Dakota, ever-young Billy Peterson celebrating #60 at the Artists Quarter, the unique sounds of East Side at the Bloomington Center for the Arts—all setting the stage for even more heat with the Roy Hargrove Quintet and Latin All-Stars coming into the Dakota to prevent a mid-week slump.

Highlights, Last Week
I didn’t get to everything I want to hear, notably missing Lucia Newell and Debbie Duncan at the Dakota. But, still, it was a great week of music:
• Pat Moriarty and Phil Hey duking it out at the Black Dog (1/14). It’s much too rare that these guys confine themselves to duet mode. (See blog, 1/20)

• Ramsey Lewis Trio at the Dakota (1/18-19). Maybe it was unfortunate that Lewis was just here at the Dakota in September, as this high-price ticket did not draw the crowds it deserved. With young drummer Charles Heath and younger bassist Joshua Ramos forming his new trio, Lewis was a sparkling example of nuance, touch, and emotional flexibility. Sure, the gospel-inflected blues really rocked, but it was his delicate balladry and quick imagination that won the night.

Highlights, This Week
Let’s start the weekend on a wild note with the return of Nellie McKay to the Dakota (second night tonight, 1/21), this time bringing along her own touring band rather than relying on the talents (which are many) of the Prairie Home Companion crew. A singer-songwriter who defies classification beyond “extraordinary,” Nellie can be sweet as Doris Day (to whom she paid tribute on a recent CD), as prickly dark as Patricia Barber and as weird as Tiny Tim – and she plays the ukulele, too, as well as a mean piano. Go and have fun. And be sure to have some extra caffeine tonight so you can hang out through the Late Night set (tonight at 10 pm), featuring teen jazz wizards, the Quentin Tschofen Trio (with Quentin on piano, Caitlin Kelliher on bass and Emerson Hunton on drums). This will not sound like a student band. Quentin, still in high school, won last year’s Jazz Piano Scholarship Competition, plays for a second year with the Dakota Combo, and handles the piano duties for the U of M Jazz Ensemble II. Plus he’s a sophisticated composer. Caitlin and Emerson are up to the challenge, also members of the Dakota Combo –one of 12, and the only Midwest band, selected for the Charles Mingus High School Band competition to be held next month in New York. Where is jazz going? They know.

Birthday parties starring a Peterson are getting commonplace, with an annual bash for Jeanne every August at the Artists Quarter. But this weekend (1/21-22), the candles shine for bassist Billy, celebrating his 60th with pals Peter Schimke, Brian Grivna and Kenny Horst. And likely a few Petersons. Any gig involving Billy offers stellar music and a good time. We can use that multitude of candle light to knock down that windchill!

Out “west” in Plymouth is a reunion of the Phil Aaron Trio (with Tom Lewis and Jay Epstein), part of the Jazz @ St. Barney’s series at St. Barnabus Church. The trio was one of my initiations into the Twin Cities jazz scene when I started getting serious about the music in the early 90s, when Phil and friends were regularly performing at the Hotel Sofitel. (It was a 15-year gig!) You can probably still find their one recording, I Love Paris. But a live show? The rarest of treats.

Sunday afternoon (1/23), head out to the Bloomington Center for the Arts’ Black Box Theater, and intimate space perfectly suited to the music of East Side. Guitarist Reynold Philipsek, harmonica master Clint Hoover, bassist Matt Senjem and percussionist Michael Bissonnette will present their alluring arrangements of music from Astor Piazzolla to Miles Davis – hence the show’s title, “From Miles to Astor.” One of the highlights of the Twin Cities Jazz Society’s Jazz From J to Z season, this is a user-friendly gig, held during the warmest part of the day, with tons of free parking. Rumor has it that tickets are going fast. And if you miss it, or want more, East Side will be at Hell’s Kitchen on Tuesday night (1/25).

The Loring Pasta Bar continues its Monday Night “Musique Mystique” series of duos with the very tantalizing pairing of Lucia Newell and Dean Magraw (1/24). It will be savvy and fun, and largely unpredictable. Just like jazz.

The Dave Holland Quintet was originally scheduled at the Dakota for January 24-25, but Dave had to postpone. No worries, the Roy Hargrove Quintet will be on the bandstand instead. It’s about a year since Roy and his very smokin’ band were last here, and with each visit they only rise higher and higher. In all the years I have been hearing Roy Hargrove, he never “calls it in,” but plays each gig, each note, as if it is the only one that matters. This is why we love jazz.

Across the river, the Artists Quarter keeps things steaming this week with the local sage of vibes and drums, Marv Dahlgren, and his quartet (1/26) and the nearly monthly showcase of the Pete Whitman X-Tet (1/27).

More Jazz This Week!
See the full week (month, day) of jazz and related music on Pamela’s blog at http://www.bebopified.blogspot.com/ ...In fact, do I need to list the rest of the week? Let me know if you find this helpful.

. February 4-5, Kronos Quartet at the Walker