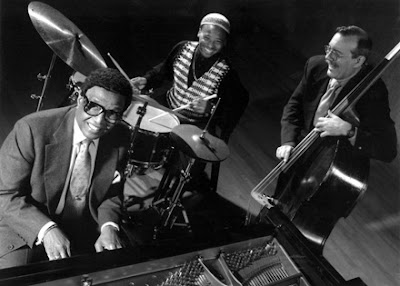 I only heard pianist and NEA Jazz Master Billy Taylor in one live performance – at the “Witness” concert at Ordway in St. Paul in early 2009. This program was part of the Vocalessence season, their annual celebration of African American history and culture. For the second half of the afternoon, Vocalessence welcomed the Billy Taylor Trio. A decade ago, Taylor wrote “Peaceful Warrior” in tribute to Dr. Martin Luther King, performing with Vocalessence, so this was a reprise. At the time, on this blog, I wrote: “Peaceful Warrior in three movements was the mainstay of Taylor’s trio performance. Despite a stroke that weakened his left hand in 2000, the 87-year-old Taylor played with sufficient swing and dexterity to enliven the melodies and support the soloing of his very accomplished cohorts, Chip Jackson on acoustic bass and Winard Harper on trapset...” That Sunday afternoon, it was Harper who stole the show with his graceful if wild antics, but for much of his life, it was Taylor who brought jazz out of its often-Ivory Tower and down to earth through concerts, broadcasts, writings and teaching. Taylor died at 89 on December 28th, and a memorial service has now been scheduled in Manhattan for January 10th.

Although Wynton Marsalis is typically cited as the one musician who made jazz a household music over the past two decades, arguably Taylor has been at least as significant a figure, Ken Burns notwithstanding. In addition to his hundreds of broadcasts on CBS Sunday Morning and his status as an NEA Jazz Master, Taylor brought jazz into the streets and low-income neighborhoods of New York City for more than 40 years through his Jazzmobile program. Through Jazzmobile, jazz musicians and educators have performed free concerts and presented clinics and demonstrations in Harlem communities and beyond. Taylor’s family has asked that donations be made in his honor to Jazzmobile –online at http://www.jazzmobile.org/ . You can read more about Taylor on Jazz Police.

Posted by Canterjazz at 2:49 PM