East Side on the West Side 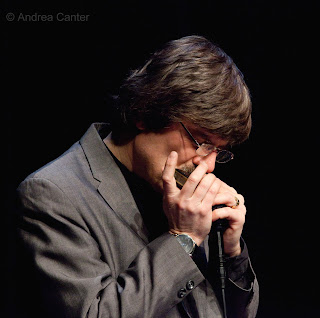 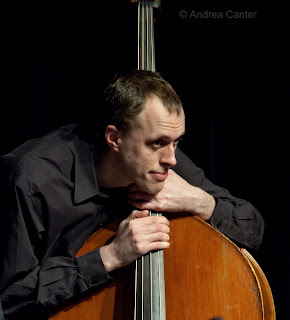 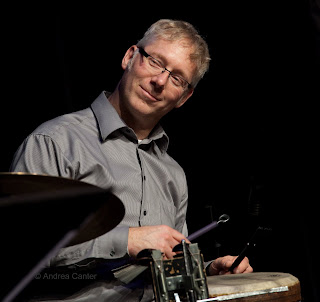 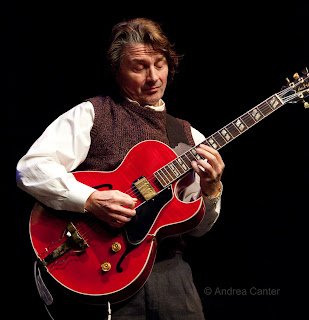 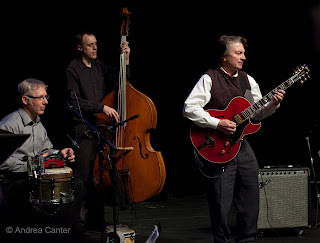 I always wondered why this quartet called themselves East Side. If anything they seem to play most often on the metro area’s west side. Turns out this was the name of one of Reynold Philipsek’s compositions that was to be on the playlist of their first gig. Last Sunday, East Side (Clint Hoover on many harmonicas, Michael Bissonnette on many percussion tools, Matt Senjem on acoustic bass, and Philipsek on guitar) played to an overly full house in the Black Box Theater of the Bloomington Center for the Arts, part of the Twin Cities Jazz Society’s Jazz From J to Z season. The audiences for the season thus far have been a bit disappointing, but East Side proved to be a big draw despite the NFL playoffs. As someone suggested, maybe the jazz audience here does not overlap much with the die-hard football fans. And it was a relatively mild day for late January.

Not that East Side plays music for the faint of heart. Just the opposite. With a show title “From Miles to Astor,” referring to their diverse influences from Davis to Piazzola, the quartet performed works of neither, instead running through all original compositions save a swinging rendition of “Softly, As in a Morning Sunrise.” Philipsek was the major contributor, and the set included many tunes from both his and East Side’s most recent recordings. You can’t help but have a gypsy or at least East European flavor wherever a harmonica is present, and there’s usually a folkloric bent to anything involving Michael Bissonnette. You can be sure of this just with a quick perusal of his “drum kit” – ankle bracelets of shells, congas, the cajon “stool” behind the snare drum, assorted bells, tambourine, hand drums and more. Bissonnette has been collecting percussion devices for years, and also makes his own. I suspect his childhood was spent banging on mom’s pots, pans and various utensils.

Philipsek shared his recent explorations of his Slavic heritage, which sparkled in recent compositions like “Upper Silesian Mist,” while tunes like “Beatnik Pie” maintained a Django undercurrent with a more contemporary rhythm. As a guitarist he shines with the best, as a composer he is as elegantly playful as prolific. (He’s released maybe 35-40 albums, and a lot of that is original material.)

We have very few harmonicists in this area, and Clint Hoover reigns supreme. If a tune calls for sax or clarinet, he reshapes for harmonica as if that was the intended voice—be it hot club swing or hard core bebop. Makes you wonder why the harmonica has not found a bigger niche in jazz. Especially with baggage restrictions on airlines. And Matt Senjem? On the surface, he’s the straight man, always there in support, occasionally soloing as a reminder of his art and passion. But you also get the sense that he’s a comedian at heart, and what could be more fun than standing among Hoover, Bissonnette and Philipsek?

Maybe sitting in the audience on a Sunday afternoon.

Photos: (top to bottom) Clint Hoover; Matt Senjem; Michael Bissonnette; Reynold Philipsek; three from East Side (All photos by Andrea Canter on 1/23/11 at the Black Box Theater in Bloomington)
Posted by Canterjazz at 10:44 AM