Dueling Pistosl (Pat and Phil at the Black Dog) 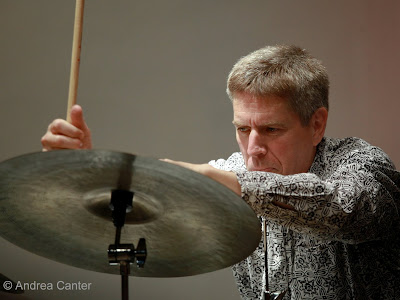 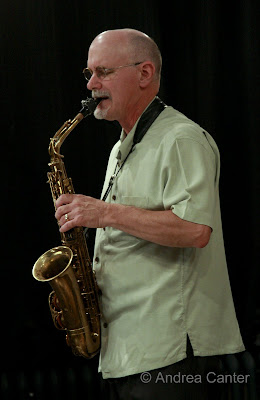 Recently the Twin Cities lost one of its favorite venues for avant-garde music when the Turf Club and its jazz-friendly Clown Lounge changed management…. and music preferences. Still, for a mid-size urban area, some great little spaces remain. The Black Dog Café in St. Paul’s Lowertown has long been a haven for improvisers, with its Fantastic Fridays series (often featuring the Fantastic Merlins) and other efforts to make music experimenting as commonplace as weekly salsa and swing dancing. Performing curator Nathan Hanson is generally on hand if not on stage. Last Friday night, amidst a mediocre excuse for a snowstorm, he lured two of the area’s long-standing free thinkers to an exquisite reunion. Alto saxophonist Pat Moriarty and drummer Phil Hey performed and recorded together in the 70s, and have since worked in a variety of chamber ensembles, but rarely as a duo. Hopefully the synergy of Friday night will be repeated more often.

Although the music flowed as free improv, the underlying melodic thread was largely, or perhaps entirely, Ornette Coleman, with “Round Trip” and “Endless” forming the first set, “The Blessing” the centerpiece of the second set. And fragments of the familiar surfaced throughout the evening, usually so suddenly and so transient that this listener’s brain could not download one identity before another melody came along. But this was not a night of “name that tune,” but rather a showcase of collaborative invention.

If you’re accustomed to hearing Phil Hey as a vocalist’s or pianist’s sideman, even if you have experienced his fiery leadership of the Phil Hey Quartet, his arsenal of melodic and often humorous weaponry in this context might surprise, and will surely delight. Beyond his trapset, he surrounded himself with gadgets—metal “spoons,” small gongs, a wooden box with mini-mallets, assorted bells and shakers, something that looked like a medieval agent of torture—a tall metal spring stuck in a metal base that vibrated crazily against a drum skin. Each item could be struck with a stick or mallet but could also strike against another percussive object, creating a deep toybox from which Phil could grab whatever sound suited the moment—a scrape, a squeal, a thud, a groan, a tinkle, a whine, a melodic sigh, even bare-handed taps and wet-fingered slides.
With all this paraphernalia surrounding Phil, Pat ended up the straight man in a science fiction rag, standing with a mere saxophone from which he extracts at least as many sounds, sometimes two distant tones simultaneously, sometimes in continuous, concentric spirals via circular breathing. At times I was sure there were at least two columns of air rising out of the sax’s bell.

It was not all dissonant, in fact there was a lot of melodicism in both the solo and duo soundscapes, yet there were many moments that suggested agitated birdcalls and creaky doors, as if Pat and Phil were rambling through a haunted aviary.

Or think of it as two guys generating an orchestra’s worth of sounds--eccentric, spooky, playful, serious….in glorious tandem.

Photos: Not from the Black Dog, but from a recent quartet gig at Studio Z, Pat on sax and Phil on drums. (Photos by Andrea Canter)
Posted by Canterjazz at 4:17 PM