Dakota Combo: Inspired by Mingus... and Another Bassist 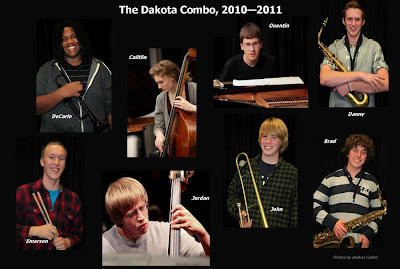 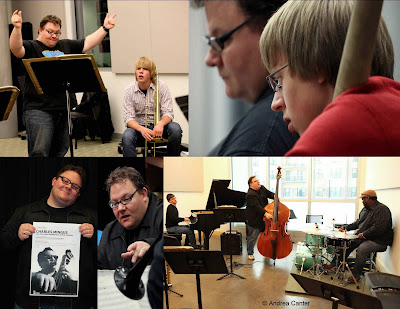 I’ve been a fan of the Dakota Combo for about five years, ever since the first ensemble of seven high school jazz students gathered for rehearsal under the direction of trumpeter Kelly Rossum in the rehearsal space in the old MacPhail Center of Music building near Orchestra Hall. Or make that, since the first audition. Not just because I am on the Board of the Dakota Foundation for Jazz Education, although that role certainly is what brought me to that audition and subsequent rehearsals and performances. But my ongoing interest (and delight) is fueled by the opportunity to witness inspiration as it occurs and as it grows, all in the context of a music I love. There’s nothing like watching young musicians “get it” and take it as far as they can, as individuals and, even more so, as a “band” that becomes another family.

That first year, the Combo was entirely seniors, so the process started from scratch at the following year’s audition. Since then, there has been at least one carryover, at least one younger student who returned for a second year. This year, there are four – because last year’s band was the youngest yet, because those “young” students grew phenomenally in skill and motivation over the year. And because they were inspired to spend another year with director/bassist Adam Linz and the works of Linz’s hero, Charles Mingus. Fortunately there were many students eager for the experience, and at the fall audition, four more students stood out, not only for their current level of skills, but for what Linz and his fellow instructors recognized as a potential affinity for the music of Mingus. Unlike the four previous editions of the Combo, the 2010-2011 ensemble would focus on the works of one composer. The MacPhail Center for Music, where Linz directs the jazz program, had just received an NEA grant to present the music of Mingus over its Jazz Thursdays concert season. What better time than now to introduce student musicians to the very complex and exciting compositions of the eccentric bassist, long recognized as one of the most original writers in jazz? And as a bassist himself, Linz was no stranger to Mingus, but a lifelong (well, through his first 35 years!) devotee and Mingus historian.

Thus Linz came up with a new project for the Combo—to learn the music of Mingus, record their efforts, and submit the tapes as part of the application for the annual Charles Mingus High School Band Competition in New York. It was maybe a longshot, as the current Dakota Combo only began rehearsals, only began studying this music, in mid September, and applications were due December 1st. The band rehearsed biweekly, tried out a few tunes early on when they played at MacPhail in October to honor local composer Carei Thomas. Their next public performance in early December, at the Dakota Jazz Club, was held a few days after the application tapes were sent to the Charles Mingus Institute.

It’s perhaps surprising that this band of students, half of whom were not part of the ensemble before September, none of whom had extensively studied the difficult music of Mingus, could so successfully come together and, not only learn the music, but develop such a level of artistic interaction in little more than two months of biweekly rehearsal. But come watch a rehearsal sometime. First, there is no doubt these students are playing many hours, both alone and with each other, between rehearsals. And listening. Listening to the many original recordings of Mingus. But there’s more to this than practice and study. Adam Linz, like the music of Mingus itself, inspires his students and readily, almost telepathically, taps into each young musician’s drive to excel, to find his or her heart in the notes and within the collaboration with fellow musicians. It’s the inspiration that fueled his own development and his ongoing evolution as a jazz musician.

The good news arrived this week – the Dakota Combo was one of 12 high school bands nationwide to be invited to compete in New York City on February 19-20. They will compete in the Combo/Special School & Program Division against bands from arts high schools in Hartford and Manhattan. And they will participate in a day of clinics and jam sessions prior to the competition, all held at the Manhattan School of Music. There are some other special activities as well, including opportunities to hear the Mingus Big Band at Jazz Standard and to hear the Mingus Orchestra, directed by Gunther Schuller, performing works with gospel choir at the famed St. Bart’s Church.

And most of all, as Quentin Tschofen, Combo pianist, points out, there will be “the opportunity to play jazz in New York among a lot of people who really love the art form…”

The Dakota Combo is a program of the MacPhail Center for Music, supported in partnership with the Dakota Foundation for Jazz Education (see http://www.dfje.org/). The Combo for 2010-2011 includes DeCarlo Jackson (tpt), Danny Hupp and Brad Allen (sax), John Cushing (tb), Quentin Tschofen (piano), Caitlin Kelliher and Jordan Jenkins (bass), and Emerson Hunton (drums). All but DeCarlo and Emerson will graduate in June.

Photos: (top to bottom), members of the Dakota Combo; Adam Linz directing the Combo; the Dakota Combo performing at MacPhail in October 2010. (All photos, composite design by Andrea Canter)
Posted by Canterjazz at 4:43 PM