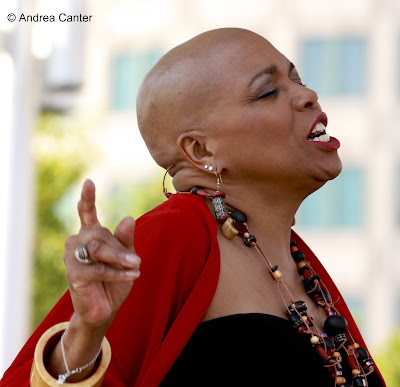 Some voices – mine for instance—are barely suitable for conversation. Some voices –very few—seem well-suited for almost anything defined as music. And even fewer can navigate across genres and styles while also entertaining and inspiring, be it for an intimate club audience or a full-house in a major concert hall. Or on the air. Dee Dee Bridgewater has such a talent, and it was on full display at Orchestra Hall last night as part of an evening of “Yuletide Jazz.”

I can’t think of another vocalist who could so readily, so ably present Lalo Shifrin arrangements of “The Shadow of Your Smile” and “The Way We Were,” follow with a French rendition of “Autumn Leaves, ” greet the holidays (and Holiday) with “God Bless The Child,” “The Christmas Song” and a conjoined “Away in a Manger/A Child Is Born,” scat “horn” to horn with Irvin Mayfield on a jazz quartet version of “All of Me,” and close out the night with a stunning “Come Sunday.” Of course one look at Dee Dee’s discography and it’s clear she fancies diverse projects; one look at her press and it’s clear she continuously surpasses herself on each new venture. I’ve heard her with her French quartet and Malian “Red Earth” projects at the Dakota Jazz Club; fronting a big band at the Detroit Jazz Festival; and now engaging one of the world’s finest classical orchestras as well as dueling with its Artistic Director for Jazz, trumpeter Irvin Mayfield. And I’ve never heard her in better voice or more humble persona.

Dee Dee repeatedly noted, to the audience, that she was nervous; this was her first appearance with the Minnesota Orchestra. Turns out there had been only one rehearsal. She wanted to get it right. She nailed it. Every tune.

Dee Dee Bridgewater is a regal presence, from her flowing gown to her shaved head that only accentuates the beauty of her features, a high priestess of song who looks the part. With her voice she can summon sacred and profound, she can flirt and seduce, she can swing and swagger, and she can become any instrument—on the Orchestral Hall stage, another trumpet—and she was first chair despite Mayfield’s best efforts. But Dee Dee is more than a golden voice. Her Tony Award for her role (Glinda) in The Whiz was a peak but far from her only acclaimed role as actress; the ongoing success of NPR’s Jazz Set speaks to her skill as interviewer/broadcaster. But she’s also an incredibly graceful physical presence on stage, her gestures, her hand and arm positions, her movements suggesting a background as a dancer.

The Minnesota Orchestra and Irvin Mayfield, with and without his fine quartet (Ron Markham, Neal Caine, Jaz Sawyer), offered the first set of seasonal music, Mayfield becoming more satisfying as the evening wore on, and dueling with not-such-a-surprise guest Doc Severinsen on “Let It Snow” (Severinsen was in town for two shows with the Orchestra). But the night, the audience, belonged to Dee Dee Bridgewater. In true Minnesota fashion, she got a standing ovation on the final tune. In a rare Minnesota moment, she got a standing ovation on the preceding tune (“All of Me”) as well. She earned both. And then some.

Photo: The divine Dee Dee Bridgewater at the Detroit Jazz Festival. (Photo by Andrea Canter)
Posted by Canterjazz at 1:59 AM