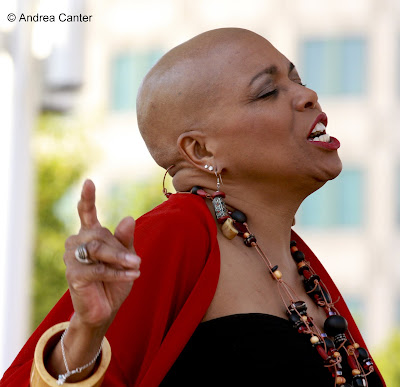 Highlight, Last Week
The snowstorm that hit the area from late Friday through Saturday nearly upstaged the music in the Twin Cities, and eliminated pretty much all live jazz on Saturday night. I said “nearly” because even Old Man Winter couldn’t outshine the Bryan Nichols Quintet, fortunately scheduled for two nights at the Artists Quarter. We only got Friday night, but that was enough to carry the weekend. Not only were we treated to new compositions from Nichols, but also to a sax duel between two of the most impressive horns in the region—Mike Lewis (on soprano, alto and tenor) and Brandon Wozniak (on tenor). Throw in Erik Fratzke and JT Bates, and you have magic. There was a good crowd despite the forecast, and everyone will get another chance when Nichols and company return January 1st.

Andrea’s Picks
Jazz tickets make great holiday gifts, and there’s good reason to start early: One of the most accomplished jazz vocalists of our time, Dee Dee Bridgewater, comes to Orchestra Hall tonight (12/17) to celebrate “Yuletide Jazz,” along with Orchestra Hall’s Artistic Director for Jazz, New Orleans’ trumpeter Irvin Mayfield, and his quartet, all backed by the Minnesota Orchestra under the baton of Sarah Hicks. Bridgewater, host of NPR’s Jazz Set and multi-Grammy nominee, has a long history of eclectic projects ranging from French love songs to Ella to the traditional music of Mali, and earlier this year released an acclaimed tribute to Billie Holiday. Whether it’s Holiday or The Holiday, it will be pure Dee Dee. There will be tunes from Mayfield, tunes from Bridgewater, and some collaborations as well.

One of the most anticipated reunions, Red Planet takes over the Artists Quarter Friday and Saturday nights (12/17-18). On hiatus while leader Dean Magraw recovered from a bone marrow transplant, this other-worldly trio (with Chris Bates and Jay Epstein) was sorely missed on the local scene. Magraw has been regaining strength with smaller gigs, and it will be a celestial “homecoming” when he takes the stage at the AQ.