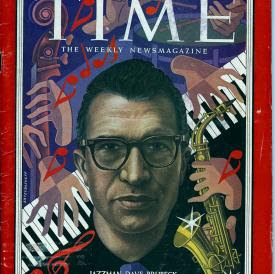 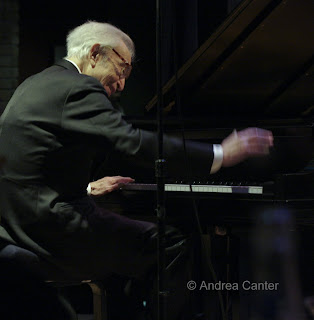 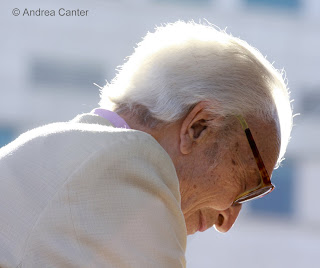 Like many jazz fans who are now of a certain age, I cut my music teeth early on listening to Oscar Peterson and Dave Brubeck. Peterson’s gone but Brubeck seems indefatigable. Today is his 90th birthday. And tonight, he’ll celebrate with family by watching a new Bruce Ricker/Clint Eastwood documentary, Dave Brubeck: In His Own Sweet Way (Turner Classic Movies). Maybe our local jazz station, KBEM, will screen the film in an upcoming REEL Jazz series.

Only two tracks on Jazz Goes to College (recorded live on Brubeck’s famed college tours of the early-mid 50s) were original compositions from the Brubeck/Desmond team, “Balcony Rock” and “Le Souk.” But the former offers a good 11+ minutes of the best of the early quartet, the signature sound of Desmond’s cool alto and the majestic walk of Gene Wright, as well as Brubeck’s affinity for the blues form—and his penchant for improvising from the first notes. “Le Souk” hints at Asian influences that would appear over and over again throughout Brubeck’s career, here evidenced through Desmond’s snake-charmer saxophone.

The original LP note for Time Out (by Steve Race) well summarizes Brubeck’s “Big Bang” breakthrough in his ongoing experiments with “compound time,” his use of “exotic time signatures, and even layering one rhythm in counterpoint over another.” The album “shows a blending of three cultures: the formalism of classical Western music, the freedom of jazz improvisation, and the often complex pulse of African folk music.”

Mention Time Out and we tend to immediately hear Paul Desmond’s “Take Five.” But the lead-off tune, “Blue Rondo a la Turk,” if not quite as popular, is the quintessential example of Brubeck’s time experiments, played in 9/8 over the unique form of 2-2-2-3, moving into alternating bars of 9/8 and 4/4, all the while incorporating a Turkish folk vibe. We who are not musicians don’t have to recognize the specifics – we only need to hear how “Blue Rondo” flows to recognize Brubeck’s genius in creating tension through rhythmic innovation. “Strange Meadowlark” follows, suggesting a waltz, Desmond suggesting some of the gentle altoists of a previous generation, playing out of their time zone but well within the melodic reaches of swing and bebop, and reflecting Brubeck’s lyrical magic. Which brings us to “Take Five,” written by Desmond in 5/4, what Race termed “one of the most defiant time signatures in all music, for performer and listener alike.” Not only does the rhythm keep ears perked, there’s an underlying swinging vamp from Dave that ensures unforgettable, toe-tapping anticipation.

Time Further Out was inspired by Brubeck’s reflections on the relationship jazz and a Miro painting, yielding a blues suite of compositions, or rather experiments on the 12-bar blues form. The time signatures vary from basic 3/4 and 4/4 to 5/4, 6/4, 7/4, 8/8 and 9/8. Talk about rhythmic diversity! Take “It’s a Raggy Waltz,” not really a rag although it has the swinging herky-jerky of ragtime, and not the sort of waltz that one could easily put onto a dance floor. One thing about Brubeck—even if his time signature seem standard, his forms never conform; there is always a significant element of unpredictability in the rhythm and flow, something dissonant in the harmony, with each musician contributing his own piece of surprise. Dave wrote his 6/4 “Maori Blues” based on a rhythm he heard at a Maori ceremony when the quartet toured in New Zealand. Often obscured by his flashier bandmates, here bassist Eugene Wright really shines with a staggering walk that adds some darkness to counter the more joyful piano lines. His prolonged solo opening for “Unsquare Dance” becomes the underlying vamp supporting handclaps in 7/4 and ultimately Dave’s vigorous, if brief swinging statement.

Further into his time experiments by 1964, Brubeck issued several “Jazz Impressions of…” albums, and his tribute to New York was one of my earliest Brubeck purchases. Four compositions provide seasonal reflections, tied together with a common ¾ meter that somehow defies ¾ -- “Autumn in Washington Square,” “Spring in Central Park,” “Summer on the Sound” and “Winter Ballad.” Then there’s the album closer, “Upstage Rumba,” a playground of percussion and Latin rhythms that builds slowly to a steady simmer. But it was the opening “Theme From ‘Mister Broadway’” that hooked me in my teens, and still today, with a hard-to-define rhythm and drive that quickly recalls “Take Five.”

Brubeck now limits his touring to the U.S., but that hardly is much of a slowdown. Despite surgery to implant a pacemaker in October, he recently played three sold-out shows at the Blue Note in New York. And the December issue of Downbeat announced his current quartet as the Jazz Group of the Year in its annual Reader’s Poll, an honor he received multiple times from 1953 through the mid-60s.

Even at 90, Dave Brubeck takes no Time Out.