Giants and Legacies: Ravi Coltrane and McCoy Tyner at the Dakota 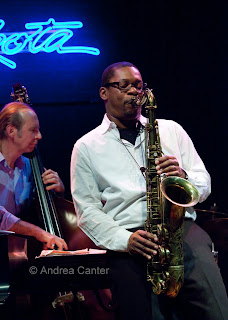 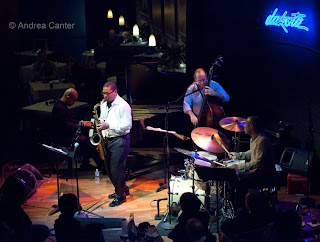 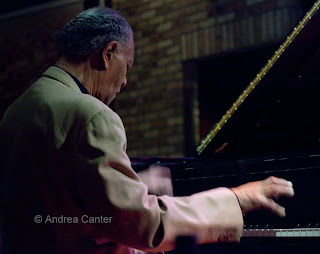 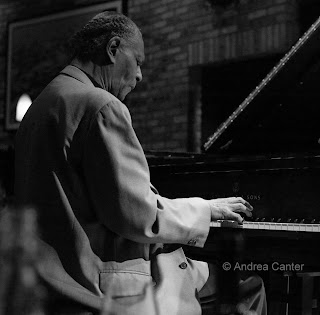 Perhaps the scheduling for its 25th Anniversary Week perfectly sums the current direction of the Dakota Jazz Club and Restaurant – two stellar mainstream jazz gigs, one by a modern rising star, one by a living legend, bookended by wildly popular (and local) gospel and blues. Robert Robinson kicked off the celebration last Sunday with his spirituals, standards and holiday vocals; blues band Davina and the Vagabonds was to close out the week on Saturday night. But in between!! Jazz Nirvana, with the Ravi Coltrane Quartet followed by the McCoy Tyner Quartet, featuring Gary Bartz. Those four nights would be hard to surpass anywhere.

As he mentioned to the audience, Ravi Coltrane grew up thinking of McCoy Tyner as an uncle, the great pianist a member of his father’s most lauded quartet. But with his own band, own label, own merits, Ravi has earned accolades that, while confirming his DNA, also validate the power of his own voice. A significant correlate of that voice is Coltrane’s long-standing group of cohorts –Luis Perdomo on piano, Drew Gress on bass, E.J. Strickland on drums—who form one of the strongest small ensembles of modern jazz. Original compositions like “October Tune,” “Prelude” and “Between the Lines,” and arrangements of Bob Dorough (“Nothing Like You”) and Monk (“Espistrophy,” “Ask Me Now”), benefits not only from the virtuosic skill of each musician but also from each extended presentation, geared to the music rather than to a standard head-solo-head format. Any of the quartet might start out alone or in duet combination, with Coltrane likely to move forward and backward several times throughout a composition, in tandem or alone, his rhythm section taking the lead, any voice taking it back – anticipation, surprise, collaboration all defining the total.

High points: “Epistrophy” (last set on the second night) started as a Coltrane/Strickland duet with Ravi rattling off the theme with a shower of staccato notes, turning it over to the rhythm section for a furious verse. Strickland’s sharp, quick motions tended to stay within a relatively small arc—we expected a pile of splinters when the aural smoke cleared. Back in front, Coltrane –a very physical saxman—moved up and down, side to side with his notes, climbing way up the scale, engaging Strickland in another dual.

“Prelude” soared like an incantation, intitially a sax/drum duet, moving into a piano/bass dialogue, with Perdomo’s delicate lines etched by Gress’s deep tones. Coltrane moved up front with the quartet before launching into an extended duet with Strickland, a lonesome bird flying, crying over a thunderstorm. Piano and drums (Strickland using mallets here) followed, Perdomo’s phrases like a choir of bells; Strickland fluttering –he manages flutters regardless of the weapon at hand. The quartet reconvened in full, ramping up the intensity before returning to the opening prayer.

Monk again: Ravi’s a cappella solo introduced “Ask Me Now, ” improvised from the first note and soon a sax/piano duet, more densely notated than the usual interpretation, and morphing into a gentle but swinging trio under Perdomo’s guidance, the pianist’s phrases neatly mirroring Coltrane with lots of notes encircling each chord.

Last time I saw McCoy Tyner was early in 2009 at the Regatta Bar in Boston, with the same working quartet of Bartz, Cannon and Gravatt. Then, Tyner (just passed 70) seemed frail, guided on and off stage as if having some difficulty with balance; his keyboard efforts still burst with the dense artistry that has been his signature for over 50 years, but somewhat short on power and pizzazz. This week, however, that veil of fragility was gone; there was a spring in his step as he navigated across the stage, a smile on his face throughout the sets, and a confident smack of each chord. His speed may be less than breakneck these days, but Tyner is Tyner, his power --if below his peak years--still far beyond most half his age. He left most of the organization duties to Bartz, but there was never any doubt as to who was steering this battleship.

The quartet opened the first night with Tyner’s classic “Fly With the Wind,” the pianist lighting the fire, Bartz fanning the flames, Cannon puffing smoke, Gravatt inflammable in solo and supporting roles. Somehow Tyner still manages celestial lines and thundering chords simultaneously. His “Walk Spirit/Talk Spirit” conjured a herd of wild horses pounding across a wide plain; Cannon presented a symphony via a single upright bass—powerful, majestic, and much like Tyner himself.

On the last set, Tyner’s flying fingers suggested a bass harp on his “Sama Lyuca,” Bartz summing the Gods with his soaring alto. Piano and bass fell into a repeating pattern, setting the stage for one of Gravatt’s percussive eruptions – all in all, one imagined the cavalry charging ahead to its next conquest. “Moment’s Notice” appeared at least twice over the two nights, most effectively on the last set where Tyner opened with solo piano, answered by Bartz’s tart tone, before the leader charged into a swinging, stride-tinted gambit. While it seemed that Tyner was literally massaging the keys, this was no gentle rubdown but a real a Swedish massage!

Tyner announced each tune on the first set, only a few on the last, but the setlist throughout was largely Tyner’s works and an encyclopedic array of his themes and influences—flecks of bebop, Coltrane, Latin, Chopin and Ravel, sweeping orchestra and delicate chamber ensemble. Time may have softened the edges a bit, but McCoy Tyner has stories yet to tell, and tell again.

Thanks to Lowell Pickett and the Dakota for a celebratory week with a living legend and a new giant. And congratulations on 25 years of survival as one of the world’s top music venues.
Photos: (top to bottom) Ravi Coltrane with Drew Gress; the Ravi Coltrane Quartet; McCoy Tyner x 2 (Photos by Andrea Canter at the Dakota Jazz Club, December 6 and December 8, 2010)
Posted by Canterjazz at 5:54 PM