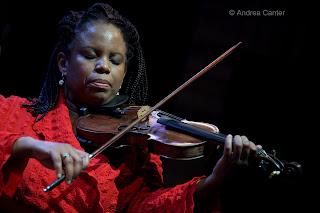 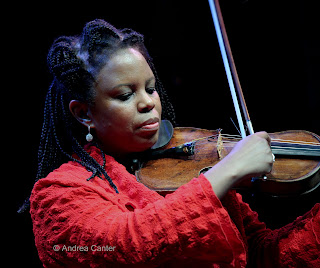 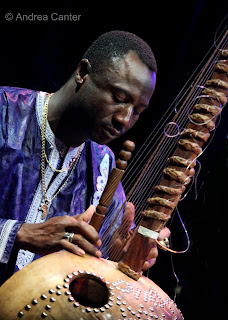 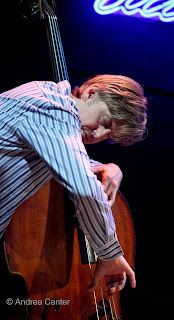 Last March, Regina Carter brought her latest musical journey to Ted Mann Concert Hall. Supported by a MacArthur “Genius” Grant, the ever-curious violinist sought to bring the music of the African Diaspora into the 21st century, blending folk traditions and contemporary global rhythms and communicating through an eclectic array of instruments, including the 21-string Kora and accordion. Much of American music owes at least some of its foundation to African art forms, and the sounds of Carter’s Reverse Thread project conjured as much Appalachia as Mali. But that evening’s presentation was cloaked in the formality of the setting, a moderate-size concert hall that was only (tragically) half full, five musicians on a large stage. Last night, this time at the Dakota Jazz Club, Carter and company reprised the spring performance in a warm and intimate room that seemed designed with Reverse Thread in mind. The stage and lighting fit the ensemble perfectly, and sitting a mere 8 feet or so from instruments like the kora, violin and accordion provides both eye and ear candy.

Regina Carter proved long ago that she can do just about anything musical with a violin, be it the blues, swing, Motown, or modern classical repertoire, but perhaps she has never been closer to the fiddler tradition as with Reverse Thread. During the late set, her violin issued an invitation to dance at every turn, be it tinged with African ritual (the stunning opening “Hiwambe Awumba,” the soothing Constant Gardener theme “Kothbrio”), Latin tango (a Piazzola scented“Un Aguinaldo Pa Regina”), carnival (drummer Alvester Garnett’s post Katrina spiritual, “New for New Orleans”) or a meeting of Middle East and Appalachian folkloric (the foot-stomping “Artistiya”). Every tune was a fully realized conversation that hauntingly evoked more than the ancient “threads” of modern music, but more broadly a sense of human history and diversity as well. Yet despite its depth, that conversation never turned formal, never felt choreographed, but rather as spontaneous as a bebop jam session and with a familial camaraderie. (In part, that might be logical given that Carter and Garnett are husband and wife; bassist Chris Lightcap is a long-standing collaborator.)

The kora alone, in the hands of Mali magician Yacouba Sissoko, deserves its own review. At a pre-concert talk at Ted Mann, Sissoko had described the making of his instrument from a large gourd, ten strings on one side, 11 on the other, yielding a sound much like a dulcimer without the hammerstrike. Tonight I could see each of his hands stroking, sliding, gently tapping strings, literally weaving sound. Augmenting each composition, Sissoko particularly brought a unique layer to “Artistiya,” a peasant dance that was alternately thumpy (thanks to heavy rhythmic antics from Garnett and Lightcap) and joyously bluegrassy; Carter’s violin sparked images of Mark O’Connor and Aaron Copland. “Kothbrio” started as a kora/bass duet, soon a trio with Carter (that’s 29 strings!), Garnett adding percussion to create a repeating theme that quickly embedded itself in the ear canal. Sissoko’s solo – massaging the strings as if an upright thumb piano-- added wistful layers to an already intoxicating harmony, while the multiple strings added frenzy to the bustle of “Fulltime,” written by African bassist Mamado Ba to reflect his first impressions of New York City.

If violin and kora were out front much of the evening, the “rhythm section” offered an essential glue. Garnett provided constant propulsion and occasionally took the spotlight, demonstrating the many voices inside a traditional jazz trapset, be it his own verbalizations that served as oddball mouth percussion during his solo on “Fulltime,” or his attacking monologue on the encore juxtaposition of “Juru Nani” and the hymn, “God Be With You,” a mélange of cowbells, rimshots and pounding on the sides of his tom. Lightcap was more the master of subtlety, often weaving in and out with Sissoko, setting the elegant vamp of “Kothbrio,” adding muscle to “Artistiya” and sway to “Un Aguinaldo Pa Regina.” If there was an unsung hero, it was accordionist Will Holshouser, who rarely came forward but whose slow moving currents added soft texture throughout, whose duet with Lightcap on “Un Aguinaldo Pa Regina” added pathos, whose swing tooks us straight to Congo Square on “New for New Orleans,” whose bluegrass flavorings served as the bridge between African and American roots on the encore.

Photos: (Top to Bottom), Regina Carter (2); Yacouba Sissoko and the kora; Chris Lightcap (All photos by Andrea Canter at the Dakota, November 2, 2010).
Posted by Canterjazz at 1:26 PM