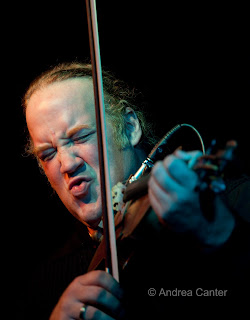 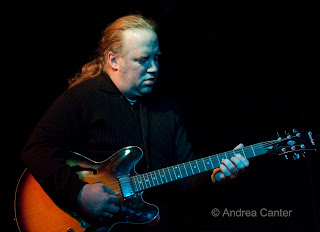 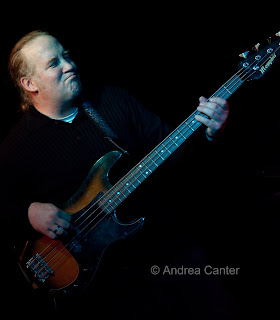 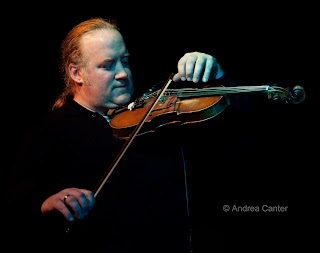 I previously saw Christian Howes at the Dakota, about three years ago. He played violin. I don’t recall that he also played guitar and bass. In looking back at my photos from that night, he came with a quartet (keyboard, drums, guitar). And had he confined his playing to just violin last week (October 27th) at the Artists Quarter, it would have been a good evening of eclectic, even eccentric music ranging from bop and blues to down-home electronica.

But Howes also played guitar and bass, sometimes all three instruments in quick succession, and sometimes adding loops to create a simultaneous string section. Drummer Cedric Easton and keyboardist Hamilton Hardin filled out the “orchestra,” but even with some fiery solo exploits, particularly from Easton, Howes’s three-pronged array could have sufficed as a one-man/multi-instrumental showcase. His recent release, Out of the Blue, features guitarist Robben Ford, but here, Howes supplanted Ford with his own six strings (or, rather, his own 14-string arsenal), his loops allowing him to pick up the bass or violin while continuing the guitar vamp.

The first set of music included original compositions from the new album--the title tune and “Bobby’s Bad” (in honor of Bobby Floyd), and from an earlier release, “When She’s Like Water” (based on a Cat Stevens tune). “Out of the Blue” was the most compelling, Howes not only moving back and forth seamlessly from one ax to another but both Easton and Hardin taking their own spins, the music running the gamut from whiffs of “Amazing Grace” to sensations of an electrified Stravinsky, and particularly on violin, Howes conjuring the intensity of John Coltrane’s soprano.

Many musicians are “multi-instrumentalists” and it is not unusual to see a saxophonist move across two reeds in a given composition. More unusual is an artist who can move through three instruments (four counting the loops) in a matter of a few bars, particularly when one involves alternating arco and pizzicato technique. And rather than a novelty act, make it all seem perfectly logical.

Out of the Blue is an intriguing and highly enjoyable recording, featuring not only Robben Ford but also pianist Tamir Hendelman, organist Bobby Floyd, bassist Kevin Axt and more. But I suspect it could have been just as successful had Christian Howes gone “solo.”

Photos: (Top to bottom) The many musical faces of Christian Howes, on violin, guitar, bass... and an unusual hand position on violin. (All photos by Andrea Canter at the Artists Quarter on October 27, 2010)
Posted by Canterjazz at 9:55 AM