Mingus Among Us, Part II 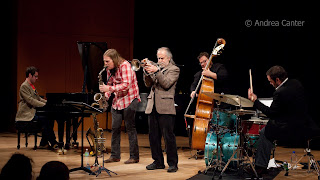 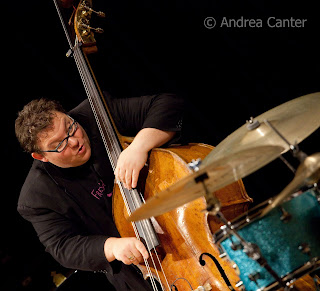 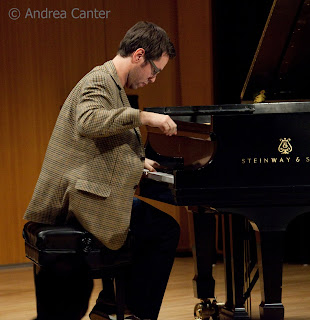 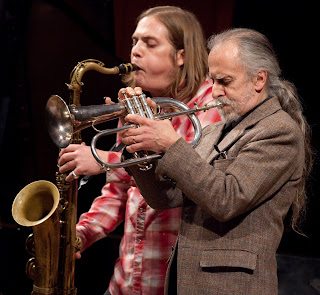 “Half politician, Half musician. Half New World explorer. Charles Mingus set the new standard for intensity in jazz. From wild highs to beautiful lows his music has shaped young musicians all over the world to ask, ‘Why is Governor Faubus so ridiculous?’” –Adam Linz

Three NEA grants (American Masterpieces) for chamber music in 2010-2011 support projects devoted to the works of Charles Mingus, including the four-concert series at the MacPhail Center for Music. Presented as part of its annual Jazz Thursdays program, “Meditations and Revelations” is the brainchild of bassist/MacPhail jazz coordinator Adam Linz, a longtime devotee of the “one-man avant garde,” to quote John McDonough in his article about the MacPhail grant in this month’s issue of Chamber Music magazine. In explaining the rationale for presenting the music of Mingus live, Linz told McDonough, “It’s the ability to find spontaneity in music that’s fifty years old [and to] take it somewhere it hasn’t been. That’s the spirit of Mingus… You have a band that rehearses without charts and adds to the performance…we want to keep that spirit that it may all fall apart.”

This past week, Linz and cohorts presented the second concert of the series, titled “So Long Eric” after a Mingus composition written on the occasion of Eric Dolphy’s departure from his band. A pre-concert Q&A in MacPhail's Antonello Hall addressed the assertion that “Mingus was amazing.” Why? The evening’s quintet—Linz, pianist Bryan Nichols, saxophonist Mike Lewis, trumpeter Greg Lewis (Mike’s dad), and drummer J.T. Bates—offered answers: the flow of his compositions, his unique chord changes, his engaging melodies, his modern harmonies, his drive to challenge tradition that landed him somewhere between mainstream and free jazz. More specifically, they noted how Mingus combined the influences of bebop, choral music and Bartok, how he steadfastedly played his own music, how he managed to maintain his own bands. And how his music reflected the politics of the day, particularly racial segregation. Musically, Mingus was a civil rights activist.

The first concert in October was a trio presentation. The November event upped the complexity factor with the addition of two horns, adding dissonance, extending harmonies, creating at times a (somewhat) controlled chaos. “So Long Eric” was a toe-tapper with one rippling solo after another, at times melodic (especially Linz) and ending in a cacophony of bird calls, courtesy of Lewis and Lewis. More lyrical, more balladic was “Orange Was the Color of Her Dress," highlighted by the father-and-son horn duet, songful Linz solo, gentle brushwork from JT (interspersed with aggressive accents), Greg Lewis’ soulful flugelhorn, and jaunty keyboard spins from Nichols. Somehow Mingus manages to swing while simultaneously disemboweling conventional structures. And Mike Lewis manages to simultaneously create the hymnal sound of Charles Lloyd and powerful wail of Sonny Rollins.

How can anyone hear “Fables of Faubus” and not like jazz? The music unfolded like a cartoon soundtrack, each instrument a character defined as much by posture and gesture as by sound. If only he had not been real, Faubus would have been hilarious. More serious, “Weird Nightmare” featured Greg Lewis’ beautiful tone on flugelhorn, his lines weaving in and out with Mike’s alto—a lovely combination of the lower brass and higher reed. Nichols seemed to channel Bill Evans here, while Linz delivered slow, exquisite lines, his long glissindos falling into further silky passages from Greg Lewis. “Jelly Roll” was an engaging circus of bop acrobatics with a freer purpose, summing Mingus’s efforts to swing, to experiment, to collaborate with like-minded artists. Yes, at any minute, it might fall apart. What fun.

You can find John McDonough’s article about the MacPhail grant in the November/December 2010 issue of Chamber Music, the magazine of Chamber Music America. The next Mingus concert at MacPhail will be February 3, 2011.
Photos: (Top to Bottom) MacPhail's Mingus quintet in Antonello Hall; Adam Linz; Bryan Nichols; Mike and Greg Lewis; JT Bates (All photos by Andrea Canter at MacPhail on November 18, 2010)
Posted by Canterjazz at 11:17 AM