Mehldau, Mostly in Motion: The Premier of Highway Rider 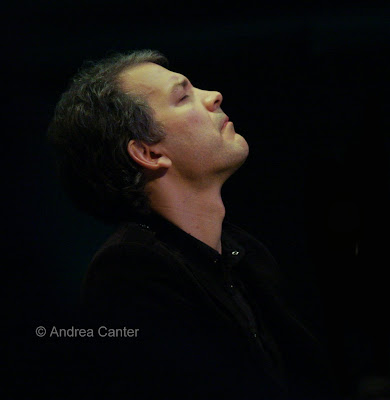 Epic works are not for the faint-of-heart, and present challenges to composers, performers and audiences alike. Ideas need to flow convincingly, hold audience interest over a significant period of time, and showcase performers as well as composition. In creating his first orchestral work, pianist Brad Mehldau comes close to meeting these challenges in full. And even “close” merits the celebratory cigar.

The world premiere of the fully staged Highway Rider was performed November 5-6 at the Walker Art Center, with Meldau’s trio, guests Joshua Redman and Matt Chamberlain, and the St Paul Chamber Orchestra. If not a perfect 10, Highway Rider nevertheless signals Mehldau’s maturation as a composer of modern eclectic music with broad appeal. Over the past decade plus, Mehldau has garnered consistent praise for both technical agility and a personal, typically introspective artistry. I’ve long admired both components of his music, but at the same time have been underwhelmed when his often-long solo improvisations turn so far inward that there is no room for conversation. Writing for many voices thus seems to serve Mehldau (and his audience) well, providing a context that demands interaction and thus greater movement of ideas to sustain the whole.

Highway Rider takes the small chamber core that has defined Mehldau’s music—with Larry Grenadier on bass and Jeff Ballard on drums—and adds additional jazz voices (saxophonist Redman and second trapset drummer Chamberlain) as well as a small classical orchestra (SPCO directed by Scott Yoo), thus opening endless options for composition and improvisation. Even within the small ensemble format, which accounts for several segments of Highway Rider, Mehldau takes more chances and generates more excitement than I’ve witnessed in his usual trio club dates. And with fifteen “movements,” there was plenty of diversity in form and mood, from lyrical to stormy, from neoclassical to boppish to folkloric. Although there had been very little time for full rehearsal with the SPCO, the interactions among musicians drew upon long-standing relationships –Redman was one of Mehldau’s early employers; Scott Yoo was an old friend from childhood music programs; Ballard and particularly Grenadier have been Mehldau’s long-time trio-mates.

Right out of the gate, the opening “John Boy” brought the two drummers next to the piano, Chamberlain beating on a tom and Ballard thumping what can be described as a miniature conga. The effect simulated galloping horses. This was not to be a recapitulation of the Art of the Trio! The SPCO, as well, brought in some unexpected components throughout the work, from the four-piece French horn section to the contrabassoon and standing chimes.

The addition of Joshua Redman to the ensemble reflects one genius celebrating the gleam of another. Redman alternated on soprano and tenor, often sitting back as sideman, but rendering pure glory as soloist, from the country blues ‘n strings of “Don’t Be Sad” to the “hop-a-long” duet with Mehldau on “Old West” and tart swirls of "Sky Turning Gray.” Other segments of particular note include Mehldau’s shifty soloing on “Walking the Peak,” the near-tango sway of “We’ll Cross the River Together,” the percussive, folksy swirl of “Capriccio,” the Monkish “Into the City.”

In his extensive written introduction, Mehldau cites Beethoven for his architectural inspiration—“his way of generating not just the melodic material from a motif, but also larger tonal relationships that unfold and span the entire work, thereby connecting small scale and large scale…” A thematic thread indeed runs through the full work, but even Beethoven rarely extended his structures beyond an hour. The second half of Highway Rider occasionally stagnated, as if reaching a conceptual cul de sac. Two hours is a long time to keep any thematic thread intact, engaging, in motion.

But when Mehldau moves, so does the Earth.