Blues, Touch, Bop and Rhythm: In the Hands of Kenny Barron 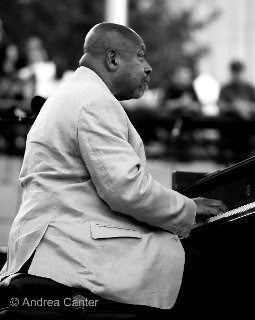 In the midst of a tour of America's Heartland, NEA Jazz Master pianist Kenny Barron took time to address a Saturday morning gathering of students and miscellaneous enthusiasts in Iowa City, a prelude to the evening's concert with his trio and special touring partner David Sanchez. The billing information suggested a more formal presentation, but Barron was anything but didactic. Rather, he was both personable and humble, entertaining and thoughtful. A lot like his playing.

For the first half hour or so, he shared anecdotes about his development as a pianist, composer and bandleader, sprinkling conversation with performance as he sat at the grand piano. He recounted beginning piano lessons at age 6 at his mother's insistence, noting that his first exposure to live piano music was courtesy of the ice man who came nearly daily until the family got its first real refrigerator. And the ice man only knew one blues tune that he faithfully played at each delivery. Thus Barron's first and lasting influence was the blues.

Kenny's oldest brother was into jazz, and among the 78s young Kenny listened to was a Miles Davis recording with Tommy Flanagan playing "In Your Own Sweet Way." Flanagan's touch and lyricism were to strongly influence Barron for years. Much later he had the opportunity to record a duo with Flanagan. "It was one of the times in my life when I was scared to death," noted Barron.

Thelonious Monk was another strong source of inspiration, and quite the opposite of Flanagan, said Barron, noting how Flanagan's phrasing gently ebbed and flowed, while Monk's jagged edges, percussive attack and "rhythmic displacements" often yielded a "deceptively simple" result –at least "it seemed simple til I tried to do it!" Illustrating how Monk took apart standards, he played Thelonious's original "Light Blue" and then put a Monkish spin on "I'm Getting Sentimental Over You." Barron followed Monk with comments about Bud Powell's contributions to bebop, particularly his extended chords and use of triplets and "ghost notes," illustrating this time with the chord progression for Parker's "Confirmation."

Other influences included Art Tatum, Barron playing what he described as "my approximation of Art Tatum's 'Body and Soul,' and Bill Evans, who could totally change the feel of a chord by changing a single note, which Barron illustrated via "Young and Foolish." Was he influenced by horn players as well? Many, said Barron, but particularly Wayne Shorter. "I wanted to play piano the way Wayne Shorter plays tenor saxophone."

For nearly another hour, Barron fielded questions that ran the gamut from his likes (and dislikes) among modern artists to his approach to bandleading and composition, and a few suggestions for young improvisers. He noted his admiration for Mulgrew Miller and Brad Mehldau, and "anyone who plays really well… I steal from the young guys." And of his partnership with Stan Getz, he recalled that they complemented each other, both emphasizing lyricism. New artists on the scene are going in many directions – he cited Gretchen Parlato and former student Aaron Parks for their interesting rhythms.

How much does he think about what he's doing when he improvises? "I try to keep a clean slate and let it be organic." He suggested taking a simple chord and working it from all angles, then extending the chord and finding more possibilities. As for composing, he feels it won’t work if you force it or schedule a time. "Sometimes it just comes like divine inspiration," he said, "or you might have a grain of an idea to work from… Sometimes I just noodle at the piano and find something."

As a bandleader, he prefers to let each musician do what he or she does best; "I don't want to tell people what to do." But it is different, for example, playing in his usual trio versus with the addition of a horn, as in his ensemble with David Sanchez. "I'll be more aggressive with a horn, but still I want to be melodic."

One question stumped Barron. "How do you want people to describe your contribution to music?" "I don't know how to answer that. It's not something I think about. I just want to play the best I can."

And that is a significant contribution.

Photo: Kenny Barron at the 2010 Detroit Jazz Festival (Photo by Andrea Canter). Quotes are my best approximations of my notes!
Posted by Canterjazz at 5:07 PM