Student Composers and the Elements of Style 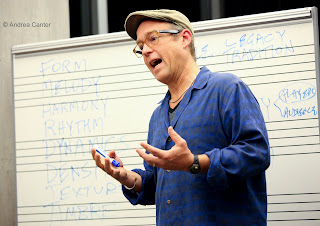 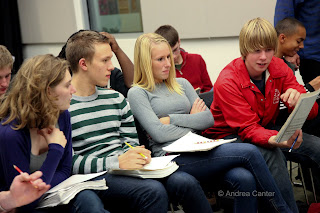 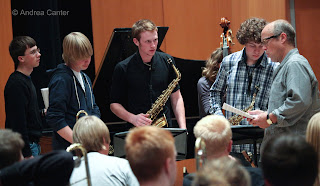 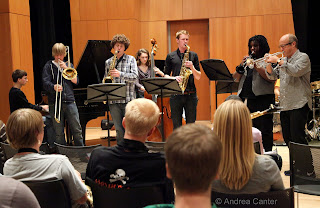 When I sat down to observe Dave Douglas’s recent workshop on composition, I figured I was going to hear about his strategies regarding musical composition, and particularly his advice to young musicians/budding composers. The two-night workshop was part of Douglas’s residency at the Walker Art Center, where he would be performing the Midwest premiere of his collaboration with filmmaker Bill Morrison, Spark of Being. This multimedia work was commissioned in part by Walker.

One of the cool components of some of the recent Walker residencies of jazz artists has been master classes/workshops in partnership with the MacPhail Center for Music, targeting advanced students in MacPhail’s jazz ensembles. Last spring, these students were able to share an evening of music and conversation with Bill Frisell, and a “meet and greet” hour with Dave King. The workshop with Douglas was an extended, hands-on experience, hopefully the first of many to come. This was not just a chance for students to meet one of the most creative artists in modern music, but to truly learn and put new ideas into practice. And play side by side with Douglas.

The core group of students was the Dakota Combo, a MacPhail project supported through a partnership with the Dakota Foundation for Jazz Education, open to area students in grades 9-12 selected through annual auditions. Others joining the Combo included members of the Minnesota Youth Jazz Band and others involved in MacPhail jazz ensembles. There were perhaps 15-20 students in total, most who attended both nights.

Douglas indeed addressed strategies for composition, the component variables of focus such as form, melody, harmony, rhythm, dynamics, style, texture, density, balance, instrumentation…. and more. But he put it all into a larger context, and I soon realized he was talking about composition beyond music—the organization of any creative form, be it a painting, a symphony, a novel – a blog! “Composition is organization,” he said early on. And much of his descriptions of the preparation, the execution, the antidotes for “writers’ block,” the transition from a “simple idea” to a finished work apply as readily to writing prose or fiction as to writing a 12-bar blues or jazz suite. Write a few lines, imagine the sound. What are all the different ways to think about sound, to vary the ideas, to get something on paper?

Of course the subject here was music, not a short story or CD review. But the parallels were obvious as Dave, on the second night, reviewed student assignments (to flesh out a short composition outlined the night before). Starting with the basic melody, how can you expand it? Turn it into a bassline; use bigger intervals; expand the range of tones; change the type of chords; transpose keys… And “write away from the piano or your usual instrument” in order to hear new voicings. Douglas noted that he often goes to the public library in order to concentrate on the sounds in his “ear imagination.”

Douglas proved to be as articulate and down to earth as an educator as he is in his music. He elicited respect and returned it readily. This was serious business but Dave made sure it was relevant and enjoyable. Everyone had a chance to participate, everyone’s work was worthy of evaluation and suggestion. The workshop proceeded from some brainstorming about the components of music composition to trying out simple ideas and variations on paper and then on stage, mostly the Dakota Combo playing out the concepts on the first night, adding groups of other young musicians the second night as students presented their fledgling compositions. For each composition, Douglas identified at least one kernel of creative energy that he turned into a lesson in vivo, a suggestion for expansion, an opportunity to experiment. And always, a reminder that jazz is a collaborative process, that they are composing for improvisors. “Some of your best ideas will come from members of your band,” he said.

By the end of the second night, at least ten student compositions had debuted on stage, often with Douglas right there in the horn section. And keeping up with his students, Dave also brought in a composition in progress, offering self critique and seeking student comments. A theme throughout the workshop was summed early when he told the young composers, “I don’t want to get technical at the expense of emotion.”

Often the problem with completing a composition is figuring out what belongs and what can be set aside. How many times have I pondered revisions to an article, unable to come up with a good way to use all the comments from an interview, all the information from online sources? “You don’t have to use everything you come up with,” Douglas told his students. Neither do I.

During a break, I mentioned to Dave that so much of his approach to writing music applied to writing words. He agreed – he still relies on Strunk and White’s bible of good writing, The Elements of Style! Mrs. Moore, who taught me English Composition in high school, would have liked Dave Douglas. And I think she would have liked Spark of Being, played out in the McGuire Theater at the Walker on the night following the last workshop session. It was complex, it was exciting, and it was never technical at the expense of emotion.

Sitting in the audience, I saw at least a dozen young jazz musicians from Dave’s workshop. And I bet that, by the next morning, there were at least a dozen new or expanded compositions in their notebooks.

On behalf of the Dakota Foundation for Jazz Education and myself, thanks to the Walker Art Center and Dave Douglas for providing this opportunity to our student musicians, and for allowing me to participate as an observer and photographer.