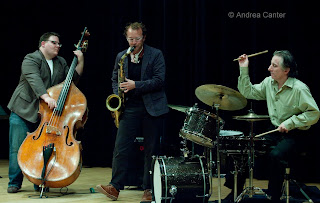 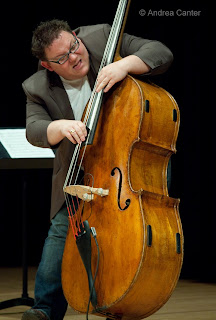 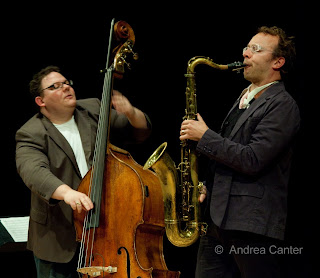 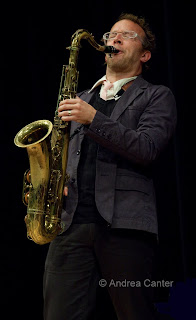 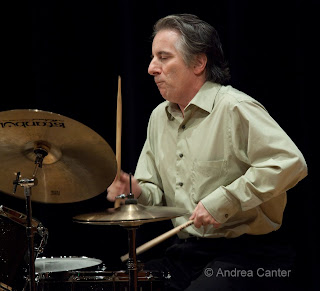 MacPhail Center for Music is the recipient of an exciting grant from the NEA to bring the eccentric world of Charles Mingus front and center, not only for student musicians but also for the general music-centric public, an audience that by and large is aware of the large body of work generated by the great bassist/composer, but likely has only a casual familiarity with it. Adam Linz, MacPhail’s Jazz Coordinator and a sterling bassist/composer himself, is spearheading the project, which involves four of this season’s Jazz Thursdays concerts in MacPhail’s stunning Antonello Hall as well as workshops and presentations for students and the community, and a focus on the works of Mingus among MacPhail’s student ensembles.

If the first of the Jazz Thursdays concerts is any indicator, then we are in for a season of exciting music and insights into one of modern art’s most creative minds. Or make that some of modern art’s most creative minds, as those sharing their interpretations on the stage at Antonello Hall must be considered as well as their source of inspiration.

Last night’s opening volley in the “Meditations and Reflections” project featured an incomparable trio of restless experimenters, including Linz and cohorts Chris Thomson (tenor sax) and Alden Ikeda (drumset). Interestingly, the first and final compositions evoked sacred and profane messages in both title and performance--“Prayer for Passive Resistance” and “Wednesday Night Prayer Meeting”—and seemed to perfectly sum the artistry and mindset of Mingus, part incantation, part community call and response. Some if not all of the works this evening are most often heard on the recordings of the mid-60s, when Mingus often used large ensembles such as the massive orchestra he convened at Town Hall. Thus the instrumentation of bass, sax and drums provided a more skeletal revelation of Mingus’ often-beautiful melodies and unique approach to rhythm and harmony that invariably conjure very human conversations. Both Thomson and Linz carried the joyous burden of serving as those human voices, happy, angry, confused, elated, often argumentative, while Ikeda provided steerage to all ports.

Adam noted that Mingus had some sort of fetish regarding slippers, and his “Slippers” was a fast-paced, slippery boppish romp. “Mingus was an extension of Ellington,” Linz explained, and their relationship was recorded just once in what he described as a “disastrous” session; nevertheless, Mingus honored Ellington with his composition, “Duke Ellington’s Song of Love.”

Thomson and Ikeda took a break, leaving Linz alone to revel solo in excerpts from the epic suite, Epitaph (“Freedom,” “Please Don’t Come Back From the Moon”) and a medley of “Meditations” and “So Long Eric.” I never heard Charles Mingus live but I’ll take comfort in the opportunities to hear Adam Linz go solo. If the bass is compared to the heartbeat of a composition (and well it should!), Linz’s instrument would short circuit an EKG. He flutters, he slaps (hard!), he glides, he slides, he chirps, he vibrates--every inch of every string is called to action. No glissando whines more slowly, no space is presented as mere filler—each opening, each transition serves the music directly.

Also in direct service to the music, intentionally or not, Adam vocalizes with every solo. But unlike Glenn Gould or Keith Jarrett, this near-scatting is neither a distraction nor truly incidental. Adam is on key, his voice a second instrument at times harmonizing, at times contrapuntal. If his finger slowly slides down the string, his voice is in tandem. We only need to put the microphone to his lips and make this duality more audible. Or more accurately, this trio or quartet, as the bass takes on multiple voices, often simultaneously. Mingus would be gratified.
“Dizzy Moods” (Mingus’ take-off on “Woody ‘N You”) featured the many voices of Chris Thomson, who, like Linz, can dazzle with seemingly limitless tactics that cover the entire range of the tenor, from melodic phrases, grunting bursts, spiraling squeals and prayerful cries. His columns of air can mimic arsenals of percussion, but not to diminish Alden Ikeda’s contributions. With sticks or brushes, Ikeda is the propeller, the gyroscope, inserting both subtle and ferocious accents, often when least expected.

This first Mingus program reminded us of the depth of the late composer’s repertoire as well as its accessibility. Bop, blues, stride, rag—it’s all part of the Mingus legacy, rearranged, retrofitted, reconstituted to feel as modern as intergalactic exploration and as familiar as home. Thanks to Adam Linz and MacPhail for putting Mingus among us.