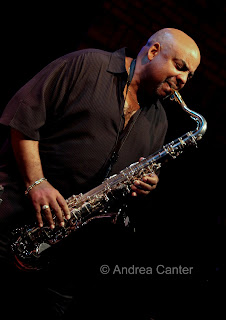 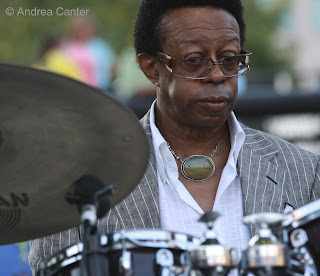 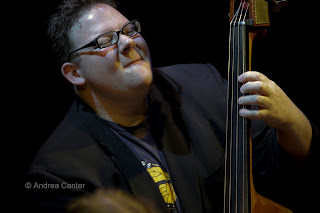 I hope I can space out my music better this week than last. I did a triple header Thursday night. I need a break. But of course there are always competing gigs!

The Artists Quarter continues its recent spate of national artists with Philadelphia-based guitarist Jef Lee Johnson (10/8-9). And let me quote from the AQ’s press since I am not familiar with this guy, who they say “is as fearless and innovative as they come…capable of creating highly experimental guitar inventions that will drop your jaw. Chaka Khan called him ‘a gift from God’ and D’Angelo called him ‘the Hendrix of our generation.’ Johnson joins forces with Twin Cities bassist Yohannes Tona, an Ethiopian immigrant who has become a notable bandleader and sideman for the likes of Nachito Herrera and Stokely Williams, and internationally renowned drummer Michael Bland, long associated with Prince.

The Atlantis Quartet, recently on stage at the AQ, makes Late Night at the Dakota the place to be after hours on Saturday (10/9), as Zacc Harris, Brandon Wozniak, Chris Bates and Pete Hennig create some of the most exciting sounds in the metro. They're the resident artists at the Clown Lounge on Tuesdays through October.

Sunday afternoon (10/9) presents one of those win-win conundrums, with the reprise of two popular shows from 2009: In Bloomington (at the Center for the Arts), Basie drummer Butch Miles returns for another round with the Wolverines Big Band, cosponsored by the Twin Cities Jazz Society. Last fall, Miles appeared in three configurations, including both the large and small ensembles of the Wolves. Now he’s back for just one gig, with one of the finest jazz orchestras in the Midwest. On the other end of the metro at the Capri Theater in north Minneapolis, there’s a repeat of “Blue: Songs on the Indigo Side” with three of the area’s most enchanting voices—Katie Gearty, Rachel Holder and Nancy Harms. And we really can’t claim Nancy as a Twin Citian now that she has moved to New York. This will be her first homecoming. This show has two options, with Saturday night as well as Sunday matinee.

Also this weekend, you can see a variety of films in the Sound Unseen –Films on Music festival (10/7-9). The most jazzy offering is Ramblin’ Boy (regarding bassist Charlie Haden) at the Trylon Theater on Saturday afternoon (10/9).

Two top-notch artists bring a lot of souful passion to midweek: Saxophonist/bassist Gerald Albright might be best known for his smooth and R&B best-selling albums, but he’s a hard-groovin’ soulful jazzman, as we heard last month at the Dakota when he toured with Joe Sample and Wayne Henderson as the Crusaders. Lowell Pickett knew a good thing when he heard it and quickly booked Albright to bring in his own band (10/12-13). Across the river, one night only at the AQ (10/13), veteran drummer Louis Hayes appears with his trio (Abraham Burton on sax and Santi DiBriano on bass). Best known for his associations with Cannonball Adderley, Horace Silver and Oscar Peterson, Hayes was last in town with his Cannonball Adderley Legacy Band.

A gig I am particularly looking forward to is the first of four Jazz Thursdays focusing on the works of Charles Mingus, at MacPhail (10/14). With a grant from the NEA, MacPhail, and specifically jazz coordinator Adam Linz, are exploring the vast composition legacy of Mingus through faculty and guest performances, workshops for students, and through the repertoire of the Dakota Combo. This first concert features Linz, Chris Thomson (sax) and Alden Ikeda (drums) and includes Ellington’s “Sound of Love,” with a pre-concert Q&A session at 7 before the live music at 8 pm. Unfortunately competing down the street at Ted Mann, it’s the annual Jazz Ensemble I Fall Concert at the U of M, directed by Dean Sorenson. This time the band explores the works of Bob Brookmeyer. And it’s free! If you’d rather sit in an intimate theater, KBEM continues its REEL Jazz series at the Trylon Theater with another round of rare film footage from archivist Bob DeFlores.

Other highlights this week include the band of young rising stars—Chicago saxman Michael Davenport, bassist James Buckley, and drummer Miguel Hurtado at Honey (10/8), Fantastic Fridays at the Black Dog (10/8); JoAnn Funk and Jeff Brueske at the Lobby Bar of the St Paul Hotel (10/9); New Orleans keyboard sensation Davell Crawford at the Dakota (10/10-11); “Second Sunday” at Honey with Arne Fogel and Jennifer Eckes (10/10); Charmin Michelle at Fireside Pizza in Richfield with Denny Malmberg (10/11 and 10/12); Jazz Implosion on Mondays (usually Fat Kid Wednesdays) at the Clown Lounge (10/11); Cory Wong Quartet followed by the Tuesday Night Band at the AQ (10/12); Lee Engele is this week’s guest artist in the new Fever Pitch series at FACES at Mears Park (10/12); How Birds Work hold their monthly dialogue at the AQ (10/14).
Coming Soon!
• October 15-16, Nichola Miller CD Release at the Artists Quarter
• October 17-18, Nellie McKay at the Dakota
• October 20-21, Hugh Masekela at the Dakota
• October 22-23, Diane Witherspoon at the Artists Quarter
• October 22, Bruce Henry at the Dakota
• October 23, “With These Songs in Our Hearts” (music of Rogers and Hart), featuring Arne Fogel, Lucia Newell and Maud Hixson with the Tanner Taylor Trio at the Hopkins Center for the Arts
• October 23-24, KBEM 40th Anniversary Gala Weekend
• October 29-30, Kelly Rossum and Nicollet Av Circus Band/Dr Jekyll and Mr Hyde at MacPhail
• October 29-30, Paul Bollenback at the Artists Quarter

Photos: (top to bottom) Gerald Albright a few weeks ago at the Dakota, returning with his own band; Louis Hayes at the 2009 Detroit Jazz Festival, now coming to the AQ; Adam Linz, coordinator of jazz at MacPhail and on stage for Jazz Thursdays. (All photos by Andrea Canter)
Posted by Canterjazz at 11:54 AM