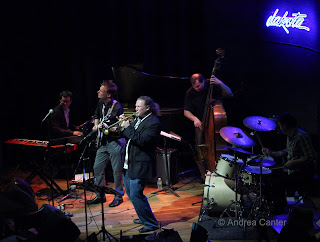 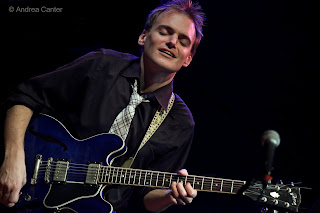 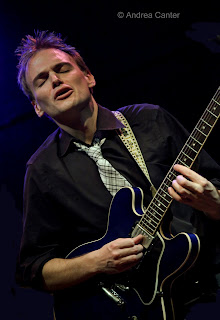 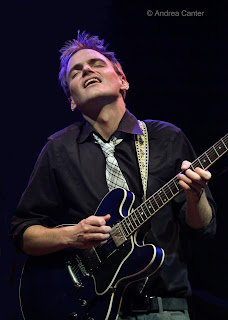 When I arrived for the second set of Todd Clouser’s CD release at the Dakota, I fully expected to hear some of the energetic compositions from his A Love Electric. “Meet Me at the Polo Grounds” and “Habit Kick” did not disappoint, and even with different personnel on stage versus the recording (Clouser on guitar, Bryan Nichols on keys and Greg Schutte on drums were the holdovers from the recording), the music was nevertheless just as funky and foot-tapping, and bassist Chris Bates and trumpeter Adam Meckler were more than up to the task. What I didn’t expect was a balladic solo piece from Clouser and engaging arrangements of McCoy Tyner’s “Passion Dance” and Charlie Parker’s “Billie’s Bounce.” Nichols, sliding between acoustic piano and electric keyboard, tore apart whatever Clouser presented to him, while Meckler delivered one impassioned solo after another. As for Clouser, he gave us a whirlwind tour of his resume, adding in tunes from earlier recordings as well as his newborn, showing us that “a love electric” can be soft and sweet as well as frenetic and freewheeling.

Todd spends most of his time in Baja, performing, composing and teaching, but does get back to his Minnesota roots now and then, and keeps the connection strong with another band, a trio with drummer JT Bates called Hope Tonic. And if you missed the Dakota gig, you have another chance to hear Todd, with Chris Bates and Greg Schutte, at Cafe Maude Saturday night (10/2).
Photos: Todd Clouser Quintet at the Dakota on September 27th. (Photos by Andrea Canter)
Posted by Canterjazz at 2:35 PM