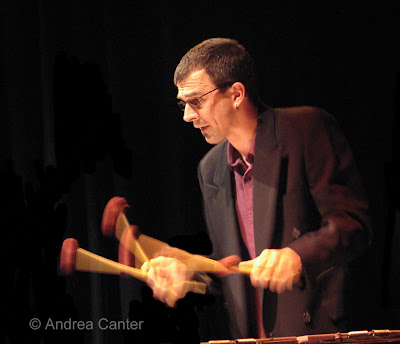 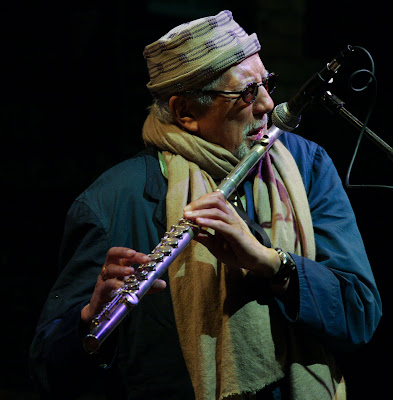 If the nights seem to be cooling off, the jazz around town is only heating up. This weekend we have the long-awaited return of master vibraphonist Ben Thomas and the opening of the Twin Cities Jazz Society’s Jazz From J to Z season, while the coming week brings back one of the High Priests of the genre, Charles Lloyd and his stunning quartet with pianist Jason Moran.

If you haven’t heard of Ben Thomas, it’s about time. Based in Seattle, he has appeared at numerous jazz festivals and concert halls, and currently leads projects spanning jazz, salsa, tango, swing, and chamber music. Of more relevance to us in the Twin Cities, Thomas was a grad school classmate of Laura Caviani at the University of Michigan; Laura appears on several of Thomas’s recordings and performed with him at the Dakota five years ago. This weekend, old pals reunite, this time at the Artists Quarter (9/24-25) with superior support from bassist Jeff Bailey and drummer Phil Hey. It’s a “modern jazz quartet” format and the play list will surely include a lot of originals from both Ben and Laura. And you have to be intrigued by a guy who names his most recent CD, Triskaidekaphobia –fear of the number 13!

There’s much to like about the Midtown Global Market in the old Sears building on Lake Street in south Minneapolis. There’s great food for take out or take in from a truly global array of vendors; there’s fresh produce and meats as well as imported goods; even clothing and gift items. But my favorite part of the MGM is the live music, particularly early Saturday afternoons. What’s better than sitting in the sunny (or at least bright!) atrium with a plateful of spring rolls or tamales or East African stew listening to Mary Louise Knutson on solo piano? You know where to find me tomorrow (9/25) for lunch.

Sunday afternoon, the Twin Cities Jazz Society presents the first concert of the 2010-2011 Jazz From J to Z season at the Bloomington Center for the Arts, with the CC Septet taking the stage. All current or past members of the Century Jazz Ensemble in White Bear Lake, these musicians make a small hornline soar like a Big Band, and their original compositions take on international flavors. Sunday they will play music from their 2009 release, She’s Big in Egypt. They will be Big in Bloomington.

Monday night (9/27), the Dakota hosts a CD release from young Minnesota-bred guitarist Todd Clouser. Now based mostly in Baja, Clouser has been compared to Bill Frisell and Marc Ribot, not only for his electrifying string chops but also for his eclectic repertoire that defies easy classification. His A Love Electric recording boasts a largely Twin Cities ensemble of high flyers—Gordy Johnson, Greg Schutte, Bryan Nichols, Jason Craft, Adam Linz, and (recently local) Kelly Rossum. Steven Bernstein handles much of the horn duties on the recording, but at the Dakota, fast-rising trumpeter Adam Meckler will add his energy to the band, which includes Clouser, Nichols, Schutte and Chris Bates. I’ve been listening to the recording—imagine the pulse and vibe of 70s indie jazz/rock fusion filtered through 21st century technology and imagination. There’s something pleasingly old-fashioned about the way Clouser creates his menagerie of futuristic sounds.

Also on Monday (9/27), the acclaimed Claudia Quintet, with the Dave King Trucking Company, appears at The Cedar. Led by drummer John Hollenbeck, this is a band of some of the most creative musicians in any genre, exploring the possibilities of electronics in the context of free improvisation—bassist Drew Gress, violist Matt Moran, accordionist Ted Reichman and multi-reedman Chris Speed, accompanied by guest pianist Matt Mitchell. The Dave King Trucking Company debuted during the Dave King Weekend last spring at the Walker, and features stalwarts of the local experimental music scene—King, Erik Fratzke, Adam Linz—along with Chris Speed. I guess on Monday night that makes him Double Speed.

Charles Lloyd has been through it all—Coleman Hawkins, Cannonball Adderley, John Coltrane, Ornette Coleman, Charles Mingus, Keith Jarrett. And then he ran away from it and found peace in Eastern meditation. But collaboration with the late Billy Higgins pulled him back into performing and recording in the late 1980s, and he’s been steadily producing some of the most beautiful music in modern jazz for the past two decades, including his trio with Zakir Hussein and Eric Harland, quartet with Geri Allen, and now his “new quartet” with Harland, Jason Moran and Reuben Rogers. Their ECM 2008 release Rado de Nube was on many top ten lists including mine, and the just-released Mirror is sure to elicit a similar response. I think it soars even higher. Composer of prayerful melodies and exquisite harmonies, Lloyd also brings magic to arrangements of standards and traditional works, and seems perfectly paired with the creative and playful mind of pianist Jason Moran, a modern-day genius who has infused new energy into the music of this jazz mystic. The quartet is here for one night only, at the Dakota on Thursday (9/30).

Some inspired singing this week: On Friday, 9/24, hear Patty Peterson at the Dakota; Erin Schwab at Hell’s Kitchen. On Saturday (9/25); Ginger Commodore returns to the Dakota; Maud Hixson's in a swinging duet with guitarist Vinny Rose at Erte'. On Sunday (9/26), Charmin Michelle serenades at Crave in the West End and later at Cinema Ballroom. On Monday (9/27), Charmin joins Denny Malmberg at Fireside Pizza (Richfield) and again on Wednesday (9/29). Christine Rosholt and company entertain at the Dakota on Tuesday (9/28). On Wednesday (9/29), Judi Donaghy fronts the Wolverines at Hell’s Kitchen, while Doug Haining’s Twin Cities Seven with Arne Fogel keeps Hell burning on Thursday (9/30).

More instrumental jazz this week: On Friday (9/24), it’s Fantastic Friday at the Black Dog and Mississippi Peace at Café Maude. On Saturday (9/25), start your day with Framework at brunch at Hell’s Kitchen; Shilad Sen, Graydon Peterson and Vinnie Rose back a swing dance at the Tea Garden; Joann Funk and Jeff Brueske prolong happy hour at the Lobby Bar of the St Paul Hotel; Jon Pemberton Trio performs at the Loring Pasta Bar; Ear Worm is on call at Café Maude; and College Music Society Jam finishes the evening on the Dakota Late Night bill. On Sunday (9/26), have brunch at Hell’s Kitchen with Firebell; Chris Lomheim and trio perform a quasi public gig at Schmitt Music in Edina (sponsored by the Osher Lifelong Learning Institute’s jazz club, tickets largely sold in advance to OLLI members but there might be a few seats left); the Zacc Harris Trio holds their weekly gig at the Riverview Wine Bar. On Monday (9/27): Jazz implosion at the Clown. On Tuesday (9/28), Cory Wong Quartet and the Tuesday Night Band at the AQ; Hiroshima at the Hopkins Center for the Arts. On Wednesday (9/29), Media Addicts at the AQ. On Thursday (9/30), Pete Whitman’s X-Tet at the AQ.

The annual Spark Festival—a celebration of electronic art and music—returns this week, September 28-October 3 throughout the Cedar/Riverside area. Visit http://spark.cla.umn.edu for schedule and details.