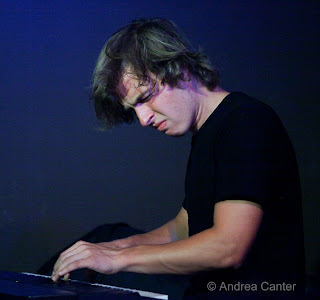 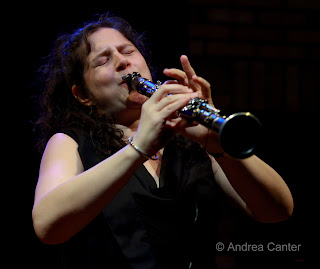 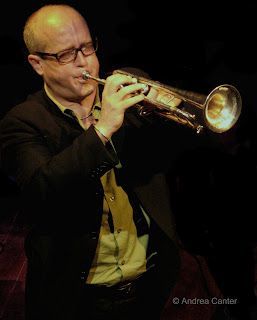 If October 7th was the only day for jazz around town this week, it would be plenty. Maybe even too much. But of course there are six more days. No one should go musically hungry this week!

First, the weekend. Ever wonder what Thelonious Monk would do if he encountered our local jazz heroes? The Artists Quarter poses that question, and answers it with an all-star quartet to honor the eccentric genius’s 93rd birthday anniversary (10/1-2). Trumpeter Steve Kenny (Illicit Sextet), pianist Peter Schimke (How Birds Work), bassist Billy Peterson (Steve Miller Band) and AQ owner/drummer Kenny Horst bring long lists of credentials and hours of play with the best from near and far. Masters of quirky rhythms and playful arrangements, they are sure to satisfy the most ardent fans of Monk’s music.

If you missed guitarist Todd Clouser’s A Love Electric CD release last week at the Dakota, you can hear a pared down version at Café Maude (10/2) with Chris Bates and Greg Schutte. It will be different without keyboard and trumpet, but that only makes it more interesting… and a good reason to hear this music again even if you were at the Dakota! (See last blog for more about this innovative guitarist’s music.)

One of the true musical treasurers of the Midwest, the JazzMN Orchestra (aka, JazzMN Big Band) opens its new season Saturday night (10/2) at the Hopkins High School Performing Arts Center with trumpeter Michael Philip Mossman and local chanteuse Charmin Michelle as special guests. Mossman has played with just about every Latin Jazz star on the planet.

And then there’s December 7th. The evening starts early (7 pm) at the AQ with the next Young Artists Series gig, sponsored by the Twin Cities Jazz Society. This time the featured performer is pianist Joe Strachan. Joe, a graduate of Northfield High School, was a 2008 finalist and a 2009 winner of the Schubert Club/Dakota Foundation for Jazz Education Jazz Piano Scholarship Competition and the pianist for the Dakota Combo during his senior year. After a year at Lawrence Conservatory, Joe decided he wanted more gigging opportunities than were available in Appleton, WI, and transferred to the U of M. He’ll be joined by young trombonist John Cushing, a senior at Minnetonka High School and returning member of the Dakota Combo, and vocalist and fellow U of M student Madelyn Hartke. The music will be as interesting as the instrumentation!

Across town, clarinet/saxophone virtuoso Anat Cohen returns to the Dakota with her quartet, just six months after her Dakota debut with her acclaimed Benny Goodman tribute ensemble. This Israeli native has redefined jazz clarinet with dazzling music that blends bebop, post bop, klezmer and folk traditions. She’s doing two sets, for which I am grateful as it allows me to get to the Walker’s McGuire Theater for the 8 pm performance of Dave Douglas’s Keystone sextet, performing the much anticipated Spark of Being, a multi-media collaboration with filmmaker Bill Morrison to reconsider the Frankenstein myth. Trumpeter Douglas has proven to be one of the most prolific composers and performers in modern jazz, leading multiple and diverse ensembles. Fortunately, the Walker and Dakota are only minutes apart. And if you are really up for a cross-town jazz fest on Thursday, the Phil Hey Quartet perform at 9 pm at the AQ…. and will go til about midnight. Meaning one could catch the late set with Phil after Dave Douglas, after Anat Cohen…. Or just hang out all night at the AQ. This is win-win. (Or make that win-win-win?)

And of course, there is more jazz this week. For some hot instrumental music: On Friday (10/1) it’s Fantastic Fridays at the Black Dog featuring saxophonist Nathan Hanson and pianist Rahjta Ren; Milo Fine’s Free Jazz Ensemble holds a semi-regular musical feast at the West Bank School of Music; at the Dakota, Nachito Herrera and friends take you to a night in Havana, and again on Saturday (10/2). Also on Saturday: Joann Funk and Jeff Brueske will soothe your soul at the Lobby Bar of the St Paul Hotel. On Sunday (10/3), there’s a Gypsy Jazz Festival at the Cedar featuring the Clearwater Hot Club. On Monday, Jazz Implosion usually brings Fat Kid Wednesdays to the Clown Lounge. On Tuesday (10/5), the AQ hosts the Cory Wong Quartet followed by the Tuesday Night Band; the Jack Brass Band is at Favor; Dan Newton’s Café Accordion swings at the Loring Past Bar. Come Wednesday, young saxophonist Tyler Anderson and a band of like-minded musicians from the U W-Eau Claire jazz program release a CD at an early set at the Artists Quarter, followed by intrepid Dave Karr; and fans of experimental music will want to catch the Symphonic Transients Orchestra at the Terminal Bar.

Always, lots of vocal jazz in the Twin Cities. On Friday (10/1), Arne Fogel sings at Ingredients in White Bear; on Saturday (10/2), Banu Gibson brings New Orleans warmth to the Hopkins Center for the Arts; on Sunday (10/3), you can still catch Charmin Michelle at Cinema Ballroom with the Jerry O’Hagan Orchestra, but the (brunch) gig is up at Crave in the West End. (Is there any music left at any Crave?) Cynthia Johnson and Michael Bloom perform as part of “Jazz at the J” (Sabes JCC in St Paul) and Ruthie Foster brings roots and more to the Dakota—and again on Monday (10/4). Charmin Michelle is on “stage” with Denny Malmberg Monday and again on Wednesday (10/6) at Fireside Pizza in Richfield. Tuesday (10/5): Arne Fogel fronts the Acme Jazz Company at the Shorewood; Nick Lowe is featured at the Dakota (and again Wednesday), and Christine Rosholt takes on Beasley’s Big Band at O’Garas. Wednesday (10/6), Arne Fogel again, this time with the Wolverines at Hell’s Kitchen; on Thursday (10/7), Lee Engele swings with the Moonlight Serenaders at the Wabasha Street Caves.