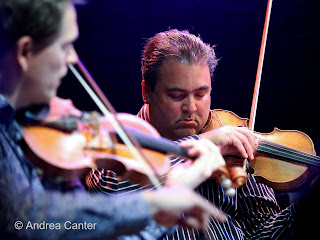 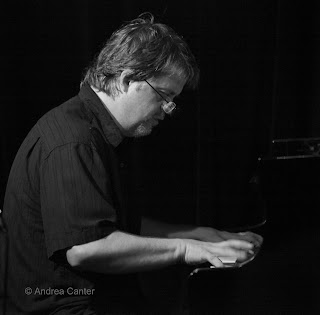 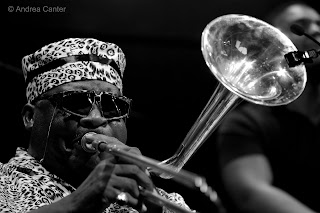 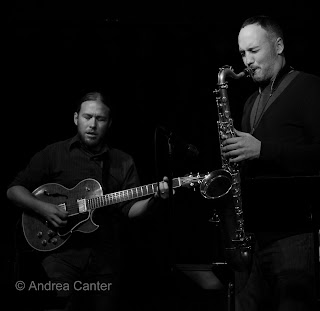 I might have expected a music let-down after three days of nonstop jazz at the Detroit Jazz Festival. But this past week was a festival of its own, and I only needed to drive 10-20 minutes from home. And it was easily as eclectic as any jazz festival.

September 12, Turtle Island Quartet. The coolest group of strings on the planet played to a full house, validating the appeal of classically trained string players improvising on Jimi Hendrix tunes in the context of a jazz club (The Dakota). Attired in jeans, not tails, the quartet played two sets, drawing heavily from their new release, Have You Ever Been…?, the music that violinist David Balikrishnan and cellist Mark Summer heard coming of age, well before the births of their younger cohorts, violinist Mads Tolling and violist Jeremy Kittel. But they were all clearly of the same mind on stage, bringing an orchestral elegance to 60s rock and material from Hendrix’s Electric Ladyland , as well as some favorites from Chick Corea and Fleetwood Mac and Balakrishnan’s own suite, a commission dedicated to Charles Darwin and Origin of the Species. The group cohesion was inspiring, but so was Mark Summer’s solo on Hendrix’s “Little Wing,” where he noted he simultaneously needed to be cello, bass and drum. And listening to Bob Dylan’s “Along the Watchtower,” why was I wondering how the TIQ would take on Bartok?

September 15, Chris Lomheim Trio’s Tribute to Bill Evans. Nearly every year, it seems, pianist Chris Lomheim holds a birthday party for his muse, Bill Evans. At the Artists Quarter this week, his trio also marked the 20th anniversary of Evans’ death. With Chris Bates on bass and Jay Epstein on drums, elegance and fluidity were in abundance. Lomheim knows the Evans repertoire better than anyone around here, and as a result, we get to hear compositions that are seldom played on local stages, maybe on any stages. They opened with the appropriate swinger, “The Opener” followed by a piece dedicated to Orrin Keepnews, “Re: Person I Knew.” Chris often plays “But Beautiful” and “Funk-a-lero,” the former a Van Heusen standard and Evans favorite which showcases Chris’s exquisite touch, the latter as close to Monk as Evans could be and filled with delightful rhythmic quirks. That Lomheim touch, that clean articulation graced Kern’s “Up With the Lark,” with Bates and Epstein bringing their voices together like extra-terrestial bells, while the trio’s rendering of Jimmy Rowles’ “The Peacocks” was simply stunning. Happy Birthday, Bill.

September 17, Jazz Crusaders. I had doubts that I should have spent the money on this show, reuniting Joe Sample with Wayne Henderson of the original Jazz Crusaders. Wilton Felder would have rounded out the original group’s core but health issues forced him to sit out this tour, and in his place, saxophonist Gerald Albright was given special guest billing at the Dakota. I must have heard the original band in the 60s but have no specific memory of the music. Given the R&B and soul bent of the band in its later years, I was skeptical. Adding Albright, I feared, would only push it farther into what is known as “contemporary” music. I was wrong. Sure, the music was definitely soulful, but there was a lot of grooving hard bop and burning soloing from Sample, Henderson and Albright, some agile basslines from Reggie Sullivan, and a pyrotechnic drum display from Morris Lucas. Sure, they played expected hits like “Young Rabbits” and “Way Back Home,” but as I heard someone say as the applause died down, “I’ll never hear ‘Eleanor Rigby’ the same again.” Interspersed among the barnburners, Joe Sample proved to be an engaging storyteller, recalling the political, social and cultural times of the 60s. It was a bit like a journey through a time warp, taking us back to the music that stirred crowds of a cross-section of America, music that made you want to get up and dance, get up and sing, just get up and cut loose. It was jazz that was still popular music, even as the Beatles were redefining pop and rock. And Albright? He fit in perfectly and blew some pretty spectacular solos. Lowell Pickett announced he is working to find a date for Albright and his own band. Sign me up.

September 18, The Atlantis Quartet. I’ve enjoyed this local ensemble since I first heard them about four years ago. In addition to composing some of the most interesting new music in town, Atlantis is building a reputation for its reworkings of classic recordings, from John Coltrane’s A Love Supreme to Herbie Hancock’s The Head Hunters, and soon (on Halloween, of course), they will perform in full Led Zeppelin’s Houses of the Holy. Last weekend at the Artists Quarter, Zacc Harris, Brandon Wozniak, Chris Bates and Pete Hennig performed compositions from their first two recordings as well as some new material. Wozniak is high on my list of horn players, showing a wide range of moods and his own signatures on every tune, putting a lot of body language into each note. Harris, too, has evolved a personal sound, one of the most lyrical guitarists in the neighborhood. Chris Bates is everywhere these days, and is as adept at the melodic intricacies of Bill Evans as the rhythmic explorations of the AQ. And Pete Hennig—he’s a drummer I can watch all day, one who manages the exuberance of a toddler discovering new sounds with the sophistication of a seasoned artist.