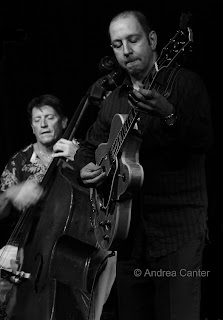 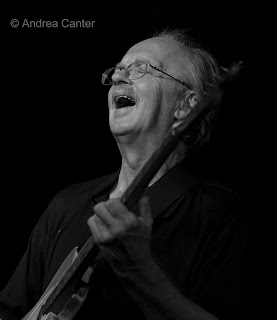 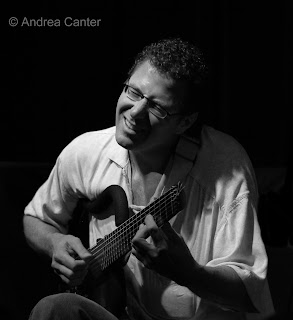 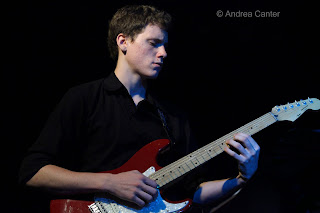 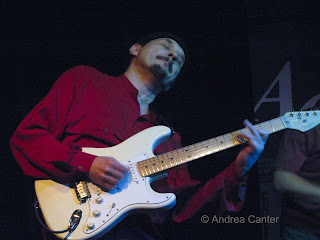 Skaff noted that it is one thing to be a good guitarist, another to be a “hero.” But he has earned that status among the local audience, dating back to his days performing with the band for the touring production of Rent, back when the AQ was located in the McColl Building on Jackson Street. Seems that some members of the company, in residence for two months, were housed in makeshift apartments above the basement jazz club. The story, straight from Kenny Horst, is that young Skaff asked for the whereabouts of a jazz club, and was told to simply take the elevator down to the basement. Greg and his guitar became regulars over the course of Rent’s run. Now he returns nearly annually. That qualifies as a guitar hero.

I missed Greg’s opening night in trio with Billy Peterson and Kenny Horst. I did catch the late set Thursday night in organ trio format with Kenny and “Downtown” Bill Brown, spiced up for a few tunes with the surprise (well, not really) appearance of organ hero Joey DeFrancesco and his drummer, Byron Lanham, who were in town for what seemed to be an unannounced appearance backing David Sanborn at the Minnesota Zoo Amphitheater. (Why a surprise? Their collaboration with Sanborn has been active all summer, but did any press mention it? Imagine the turnout at the zoo if the Strib or even the Zoo’s press had listed Joey?) Skaff himself was among the surprised, but in true hero fashion, let serendipity take its course, and the result was cool if not all-that-tight music; everyone had fun, most of all, I think, the band. Joey is one of the legends of Hammond B-3, but hearing him back-to-back with Bill Brown reminds us that we have incredible local talent. Anyway, Bill sort of looks like a slim Joey D. Maybe we are due for an “Organ Hero Weekend.” (I’m sure Joey would come back!)

Last night (Friday) was Greg’s last gig this trip, and this time it was a round robin with Billy Peterson and Kenny doing extended duty, backing, in turn, Loren “Wally” Walstad, Chris Olson, and Skaff, each doing a short set before giving the band a break. Three very different styles hung together via a common theme of melodic explorations over jazz standards and original tunes--Wally most songful on “I Hear a Rhapsody;” Chris offering a poignant blues composed for ailing Dean Magraw (“Blues in Dean”) while puzzling some in the crowd with his “traveling guitar,” which looks like a piece of hand-shaped black tubing attached to a cast-off fretboard; and Greg touching on all that I like about acoustic-based modern guitar with a couple of Monk tunes (“Little Rootie Tootie,” “Epistrophy”) and the too-seldom played “Lotus Blossom.” Sometimes, I find 21st century jazz guitarists either mired in ambient noodling or overindulging in high-tech wizardry, more feats of engineering than art. My guitar heroes use technology to elevate, not eviscerate, the music. Chris Olson walked that fine line with graceful balance, using loops and pedals that allowed his music to dance.

On the subject of “guitar heroes,” it was coincidental but timely that the Twin Cities Jazz Society’s August offering of its “Young Artists Series” was pushed into this week and put a guitar trio in the spotlight. Veteran guitar heroes start early. On Thursday night, playing the opening set, three recent high school grads brought us Three-Way Stop. Two just graduated in June—guitarist Keefe Tarnow (St Paul Central) will spend the coming year jamming around town before going on to Berklee in Boston; bassist Ted Olsen (Como Park) takes off next week for studies at Luther College in Decorah, IA; and drummer Lars Johnson is the elder, a year into studies at McNally Smith. The trio has only been together a few months, but they offered tight arrangements of great jazz classics from Wayne Shorter and Freddie Hubbard as well as original compositions, from boppish to funky. Watch out for these guys.

And one can not conjure “guitar hero” in the Twin Cities without thoughts of Dean Magraw. Dean’s been out of commission, recovering from a bone marrow transplant, so we’ve been missing his marvelously eclectic music and humor, his trio, his Red Planet, and other projects, and of course his contributions to Jazz Guitar Hero weekends. We can all be heroes for Dean tomorrow, August 22nd, at the benefit hosted by Celtic Junction, which runs from noon til dark and features a growing list of performers across all genres associated with Dean’s music. Which is just about everything with notes. So, “Do the Dean.” (Visit www.dothedean.com for more information about the benefit, for updates about Dean, and more.)

Jazz guitar—the Twin Cities are filled with heroes. Last night, New Yorker Greg Skaff, ears fixed on Chris Olson at the moment, leaned over and whispered, “I can’t believe the talent you have here!” Sometimes, neither can I.

One more night of “jazz guitar heroes” at the AQ, tonight (Saturday) at 9 pm. Photos: Greg Skaff with Billy Peterson; Wally Walstad; Chris Olson; Keefe Tarnow of “Three Way Stop,” Dean Magraw (2008). (All photos at the AQ by Andrea Canter
Posted by Canterjazz at 11:29 AM