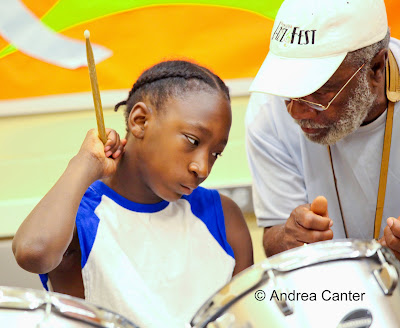 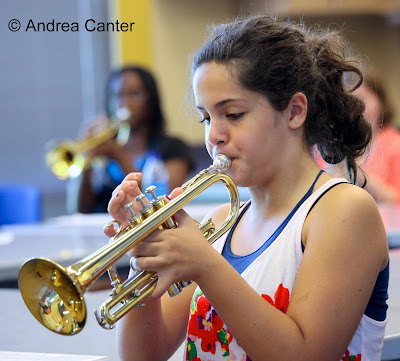 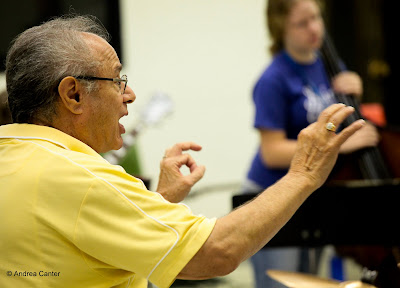 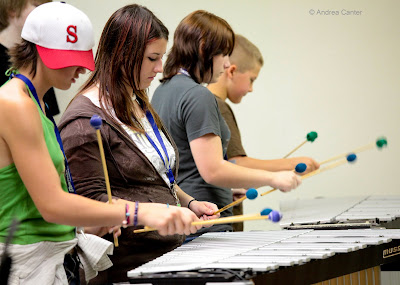 Dear Mom and Dad,
This letter is late, I know. Actually, I was really late getting to summer camp. Nearly 50 years late? You encouraged me to go, I remember, but I thought all possible fun activities were right there in my own backyard, or at least down the street on the playground. Maybe there weren’t any jazz camps in the 50s or 60s. Anyway, I quit flute after four weeks and piano after five years, never getting anywhere close to playing something as interesting as jazz.

So I am happy to tell you that I finally did get to summer camp, and jazz camp! Not with an instrument. Just a camera and a notebook. But I had fun, even if I was about 45 years older than the other campers. I learned plenty about the passion of young musicians and the older musicians who share their passions and experience. I even learned a few things about jazz!

My first camp this summer was here in the Twin Cities, the second session of the Twin Cities Youth Jazz Camp directed by trumpeter Bernie Edstrom. I was surprised to see more than 70 students at the F.A.I.R. school setting in Crystal. Apparently there were another 70 or so the first week in south Minneapolis. The students were middle and high schoolers at varying levels of skill and experience. But they all started the day clapping out rhythm patterns and then singing along before picking up their instruments and running through some general exercises. I saw some old friends and acquaintences among the instructors—saxophonist Dean Brewington, bassists Bruce Heine and Ron Evaniuk, guitarist Joel Shapira, drummer Eric Gravatt, trumpeter Greg Lewis, young pianist Javier Santiago, himself probably a camper just a few years ago. I wonder if campers realized that their instructors are among the jazz elite of the Midwest and beyond? That Gravatt, for example, still tours internationally with the legendary McCoy Tyner?
Next I had trouble deciding where to go—with the saxophones, the keyboards or the drummers? I tried to sample many of the instrument clinics, then spent some time observing the combos as students learned about interacting, listening, keeping time. I watched Dean Brewington, the saxman, work hands-on with a young drummer. I watched Javier Santiago share some music via I-Pod with his keyboard students and tell them about the importance of listening and finding your own voice. What is more inspiring to a 14-year-old than the attention of a 21-year-old?

Although I did not hear the end result for this session of jazz camp, just the weekend before, I heard Bernie’s “third level” ensemble play at the Twin Cities Jazz Festival. I thought they were the top group given their tight and inspired performance. Those kids could swing—and they had only been together for four days before showtime.

Then last week I drove up to Shell Lake, Wisconsin, for the long-running Shell Lake Jazz Camp. This was their second session of jazz big band and combo camp. Also for middle and high school students, Shell Lake is a residential camp—like the old fashioned summer camps you suggested I attend. No tents—students stay in rather spartan dorms adjacent to the school complex, a cavernous maze of hallways and old classrooms that once served the Shell Lake Public Schools. I felt like the new kid who could only find her way around if always starting from the office.

And there was a lot to find. I arrived in time to sit in on part of Kelly Rossum’s listening/composing class. I didn’t catch the band on the CD, but it was a free improv group—what I would expect from Kelly! “What did you hear?” he asked. “This will give you some ideas for what you can do to mess up your own music!” He talked about the deep traditions in jazz and how these traditions inform original music, how this background helps the composer write for his or her own ensemble. “Build your playground for the people who will be playing in it.. so they will have more fun!” said Kelly.

There’s a number of concurrent sessions every day, six periods each day from 8 am – 5 pm, and each afternoon started with some sort of Listening class, maybe a dozen students in each class. From Listening class students went off to big band rehearsals and smaller instrument clinics, all grouped by skill level and led by one of the large faculty of performing artist/educators. Mornings included workshops for similar instruments—imagine a classroom filled with 40 saxophones or trumpets! More big band and small ensemble groups followed. Particularly fun was a small class of about a half dozen students, all playing vibes!

I found each of the instructors I visited to be not only obviously dedicated to music but also to passing it on, and generally with a large dollop of humor. I might have missed a lot of the punchlines if I was in middle school! But humor seemed to allow the instructors to capture young imaginations and help focus attention to critical concepts. As Dominic Spera told his big band students, “Halsitosis is OK as long as you breathe in rhythm!” Generally colorful statements seemed to hit home, that “ahah” moment—“Everything we play in music mimics life”…. “Never run home in music” (don’t rush at the end!)… and pushing students to be the best—“Blend! Be like the Royal Philharmonic!”

Saxophonist and jazz camp director Greg Keel used a unique confabulation of English, French and Spanish to invent terms that conveyed key concepts to his woodwind ensembles. And I learned something about how to use air, watching his students practice long tones to climb the scale, listening as Greg demonstrated what happens to the pitch when breath control fails, when and how to use “slurring” like Coltrane, and when not to use it.

Camp wasn’t all work. I was invited to come to this session because of the annual Faculty Big Band concert on the night I arrived. In addition to teaching multiple clinics and classes each day, the Shell Lake Faculty rehearse and then perform at this fund raising, community-centered event. And these are among the best musicians in the Midwest and beyond. The gymnasium transformed into a concert hall with bleachers, the big band night was a glorious revue of the great bug band arrangers with ample opportunity for each faculty member to solo. In addition to the 100+ students enrolled this session, the gym was filled largely by members of the Shell Lake community, and the reception afterwards offered an opportunity for relaxed discussion with instructors, Board members and area music fans.

I didn’t stay in a dorm--one of the advantages of going to camp in middle age rather than middle school. My host Mary, a member of the Shell Lake Board, lives on a maple syrup “farm” a few miles outside of Shell Lake.

But if I was 12 again, if I played any instrument, I’d sign up for jazz camp. And I’d be begging you to send me to more than one. Each camp has its own personality and approach, and I think I would learn a lot just from the diversity of approaches and the varied experiences of the instructors and my fellow students.

Even after my short visits this summer, I think I am a lot smarter about jazz. So please send me back next summer. I promise to take out the garbage and clean my room.

FYI, I am on the Board of the Dakota Foundation for Jazz Education. One of DFJE’s projects is summer jazz camp scholarships, which we provide currently to six area jazz camps. I visited several last year, and this summer visited TCYJC and Shell Lake. Visit the DFJE website for links to area jazz camps (www.dfje.org)
Photos (from top to bottom): Dean Brewington works with young drummer at the TCYJC; trumpet student at TCYJC; Shell Lake instructor Dominic Spera emphasizes a point to his big band ensemble; students share good vibes at Shell Lake Jazz Camp. (All photos June-July 2010 by Andrea Canter)
Posted by Canterjazz at 4:52 PM