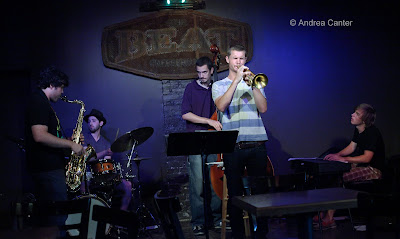 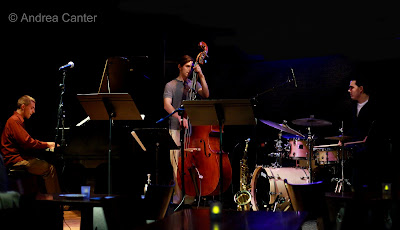 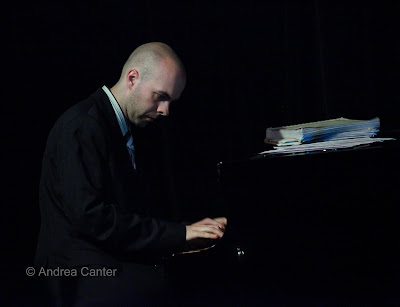 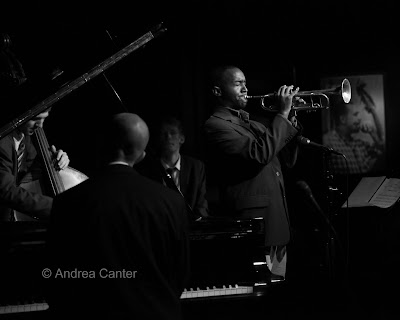 Summer is the traditional time when high schools (and colleges) hold reunions. Often schools as well as alums delay organizing or attending a reunion until at least ten or more years have passed. My high school (so far) has stuck with the decades, 10, 20, 30, 40, etc. Fortunately, this summer I have had the opportunity to attend high school reunions for which grads waited as little as a year to reconvene, and I didn’t even have to graduate with the class! These “reunions” involved former high school classmates/colleagues who together honed their evolving jazz chops in school and community ensembles, and who took advantage of summer vacation to collaborate on some new music.

BFGS, Jake Baldwin Quartet, and MPA
I’m sort of lumping three ensembles together as there is a common core of musicians who played together in varying combinations through high school and who continue to make some very sophisticated music whenever college schedules permit. Trumpeter Jake Baldwin (entering his second year at the New England Conservatory of Music), pianist Joe Strachan (transferring from Lawrence to the University of Minnesota this fall) and bassist Cory Grindberg (entering his second year at Northwestern in Chicago) are the common denominators of groups known as the Jake Baldwin Quartet, BFGS, and Metropolitan Port Authority (MPA). Jake didn’t wait for summer break to bring his quartet (with Joe, Cory and still-in-high school-at-the-time drummer Cameron LeCrone) to the Late Night series at the Dakota last spring, and with drummer Rob Fletcher (and sans bass) to Honey in early July. BFGS is the quartet with Fletcher, starting his sophomore year in Chicago at DuPaul, and the elder statesmen of the Youth Stage at the 2010 Twin Cities Jazz Festival. MPA has been around for a couple years, with Jake, Cory and Joe, along with saxophonist Remi Taghavi (heading into his junior year at the University of Southern California’s Thornton School of Music) and drummer Isaac Zuckerman (going back to Boulder, CO for his second year at UC). The group recorded a CD which they released last summer at The Beat Coffeehouse, where they reassembled just a few weeks ago.

These young and highly talented musicians had various connections in high school, with Jake, Cory and Joe teamed together in the Dakota Combo, and all the above had connected through various community jazz camps and all-state ensembles. During their senior year, Isaac led a quartet with Joe, Cory and Jake that opened for the KBEM REEL Jazz film series.

With, in most cases, only one year of college experience, the evolution of the music of these young artists is rather jarring. Each was an exceptional high school musician, not just in terms of chops but in his commitment to music generally and to original composition and arrangements more specifically. The commitment has only solidified in the past year, while individual styles seem more fluid as each explores the daily influx of new experiences, new sounds, new ideas. Even compositions that were well formed a year ago (such as Cory’s “Faded”) have morphed in new directions, bringing new moods and rhythms into play. There’s a new level of confidence that is fully audible, that we’ll hear more and more over time. And Joe Strachan, who now seems as comfortable with modern improvisation as with swing and bop, has relocated to the Twin Cities fulltime in order to find more gigging opportunities. Listen for him. And listen up for the next high school reunion with BFGS and MPA.

Javier Santiago Quartet
Back around 2003 I first heard a group of middle schoolers playing a jazz gig at the Twin Cities Jazz Festival, and over the next few years I caught The Eggz a number of times at various venues. Three became classmates at Minneapolis South High School—Javier Santiago (piano), Chris Smith (bass) and Miguel Hurtado (drums). Miguel and Chris were a year older; Javier was still around for the first edition of the Dakota Combo where he connected with bassist Daniel Duke, from St Paul Central. Over the next few years, these insatiably curious musicians worked together through varying connections—Javier joined Chris as part of the Brubeck Institute Quartet; Javier, Chris and Miguel ended up in music schools in Manhattan and playing together at the 2008 Twin Cities Jazz Festival with other pals as Neoterik; Daniel, when on vacation from William Paterson University in New Jersey, collaborated with Javier and Miguel for summer and winter gigs at his mom’s “house party” gatherings. Javier pulled together the trio (with Chris or Daniel on bass) a few times at the Artists Quarter and Dakota Late Night.

Now summer 2010, Miguel recently graduated from the Manhattan School of Music, while Javier and Daniel have about a year to go. Last week they performed the opening gig at the new Jazz Central, a private listening club headed by pianist Tanner Taylor, one of Javier’s former teachers. Joining them was another past cohort, Pawan Benjamin, a classmate of Miguel’s at Manhattan who blows a wickedly beautiful soprano sax. The music this evening showcased each musician’s talent and development, and particularly Javier’s sophistication as composer of sparkling melodies and ingenious harmonies. These “eggz” are fully hatched.

Dan Musselman Quartet
I first heard Dan Musselman at the 2008 Twin Cities Jazz Festival, when he was a newly minted graduate of McNally Smith College with a new solo piano release, Ruminations. He’s since collaborated with vocalist Rachel Holder on another recording, Save Your Love for Me, and become a mainstay of the local jazz scene, gigging with his own quartet, backing vocalists like Rachel and Lee Engele, and filling the piano chair weekly at the Artists Quarter as a member of the Cory Wong Quartet. But Dan is not a local product, growing up in Jefferson City, MO where he first honed his skills with some like-minded teens—Hermon Mehari (trumpet), Zach Beeson (bass), and Brent Steever (drums). Zach and Brent, the younger of the group, are continuing studies at the University of Missouri-Kansas City. Hermon, a recent graduate of UMKC still based in Kansas City, won a national trumpet competition and, in early July, was awarded second place in improvisation at the International Trumpet Guild Competition in Sydney.

Rather than a homecoming, the performance of the Dan Musselman Quartet at the AQ on July 22 was more of a field trip for Dan’s three Jefferson City cohorts. And the foursome had a field day working through original works, delivering fiery solos, luscious melodies and grandly swirling improvised discussions; Mehari is certainly one of the most intriguing trumpeters I’ve heard. The notion that old friends pick up where they left off was reinforced as these old friends seemed to be deep into intense conversation at the first note, a conversation that grew wings and took flight well before the first set ended. It might be a lot easier to continue the story in Kansas City, but hopefully the Artists Quarter vibe was sufficient to entice Hermon, Zach and Brent to come north again for another round with pal Dan. And maybe a stop in a recording studio?

High school reunions aren’t just about who came the longest distance or who made good on their “most likely to succeed” promise, but also about opportunities to renew connections and add new contexts to old themes. Or to take those old songs and write new arrangements, to build symphonies from fragments of melody.

New partners make for some exciting new music. But so do old friends. And those reunions can never come about too soon, or too late.
Photos (Top to bottom): Metropolitan Port Authority (MAP), with Remi Taghavi, Isaac Zuckerman, Cory Grindberg, Jake Baldwin and Joe Strachan at The Beat; the Javier Santiago Trio (earlier this summer at the Dakota with the John Raymond Project), with Javier, Daniel Duke and Miguel Hurtado; Dan Musselman; Dan's quartet with Zach Beeson, Brent Steever and Hermon Mehari at the Artists Quarter. (Photos by Andrea Canter)

Posted by Canterjazz at 2:49 PM