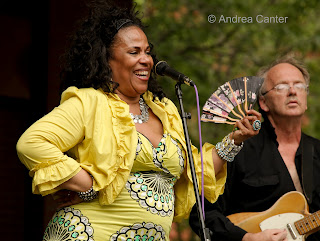 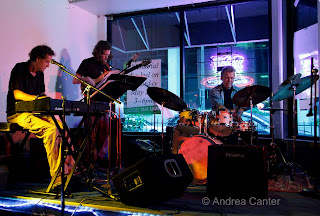 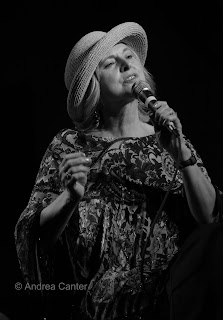 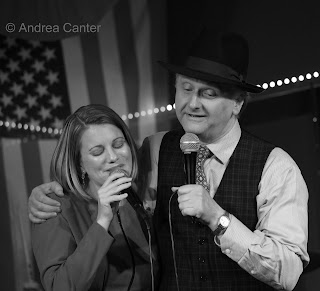 © Andrea Canter
One of the unique traditions of the Twin Cities Jazz Festival is "Jazz Night Out," a club crawl of sorts in which a bunch of more or less nearby venues schedule jazz the night before the main festival gets underway. About ten such venues participated last night, ranging from the over-the-top soulful vocalist Pippi Ardennia in Mears Park to the sublime Maud Hixson and Arne Fogel reuniting for a double dose of great songs with the Wolverines Trio at Mancini's on W. 7th. At points inbetween, there was a lineup of four bands at the Hat Trick Lounge, the "Stride Piano Night" at the Artists Quarter with Jon Weber, Butch Thompson and Paul Asaro, the Jazz Vocalists of Minnesota Showcase at Camp Bar, and more in and around Lowertown. It was impossible to do it all, and the threatening weather probably kept some fans away or secured in one venue.

I missed Stride Night.... and I hear it was a blast and full house at the AQ. I'll have to catch Jon Weber tonight in trio format. I did catch the end of George Avaloz at the Hat Trick, particularly featuring a strong front line of Dave Brattain on sax and Steve Kenny on trumpet, nearly lifting the roof regardless of outside windspeed. Next at the Hat Trick, the ever-inventive Larry McDonough on keys with Chad Draper on drums and Craig Matteresse on bass, longtime cohorts and equally adept at sublime originals and high flying bop classics. I stayed for the first part of Globafo, guitarist John Penny's latest project with Charlie Riddle and Rey Rivera, Brazilian infused fusion. The lighting is quite at odds with photography in the Hat Trick but the music was fun and the crowd near overflowing when I left to head up to Camp Bar. Five of the Jazz Vocalists of MN most seasoned and acclaimed singers had one set to go, and I thorougly enjoyed a revue of Lucia Newell, Rhonda Laurie, Connie Dusseau, Dorothy Doring and Lee Engele, backed by the Phil Aaron Trio. And their impromptu finale as a vocal quintet on "Mr PC" was a great night cap.
But not quite done, had to run up to Mancini's to catch the reunion gig of Arne and Maud, in time to hear a tune sung back and forth in French (Maud) and English (Arne) and their closing "Thanks for the Memories." The memories were readily accessed and hopefully this duo will find more reasons to perform together and soon.
Now, on to the festival, today and tomorrow. Let there be sunshine.
Photos: Pipipi, Larry, Dorothy, Arne and Maud (Photos by Andrea Canter, Jazz Night Out 2010)
Posted by Canterjazz at 1:27 PM