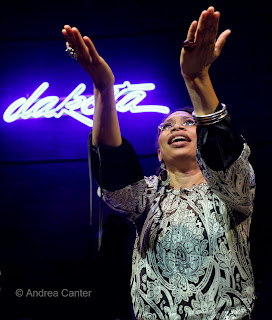 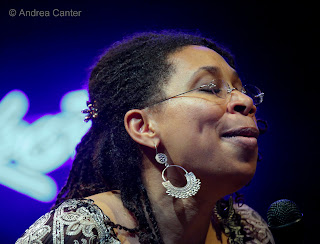 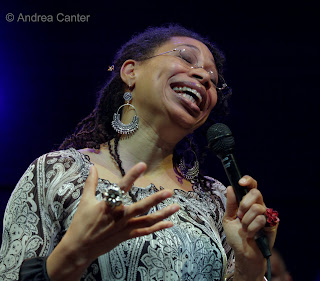 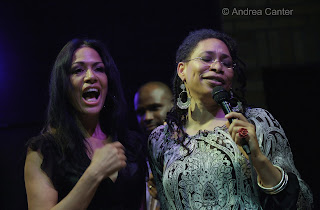 Dakota owner Lowell Pickett noted that there were no words to describe vocalist Rachelle Ferrell. Maybe that’s true. Or maybe all words describe her. There may be no sound in music, and no human emotion, that she can not deliver—not only conjuring every instrument in a symphony orchestra or every voice in a gospel choir, but the ghostly scraping of a creaky hinge, the chilling power of an avalanche, the life-affirming squeal of a newborn baby, the spattering pops of artillery fire, the delicate call of a bird or the fury of a charging elephant. In any key, in any interval within those six broad octaves. And she can shift that sound, that pitch, in a mere split second, twisting her mouth into myriad shapes that seem to pull each nuance directly from her heart. Over the course of a set running more than two hours at the Dakota May 6th), one imagined a gene pool of Sarah Vaughan, Betty Carter, Nina Simone, Abbey Lincoln, Aretha Franklin, Bettye LaVette, Minnie Riperton, and most certainly Bobby McFerrin.

Aside from her vocal prowess, Ferrell is a multi-instrumentalist, accompanying herself on a few songs on acoustic piano and the finale on electric keyboard; an accomplished violinist, at times her voice took on the timbre and elasticity of the high pitched strings… or make that all strings. She took us on rather wild treks through songs we thought we had already heard in infinite variations—“Autumn Leaves,” “Summertime,” “My Funny Valentine” (what she dubbed the “obligatory standard”), the latter a free improvisation where every syllable was grounds for experimentation. The program shifted in an R&B direction yet the vocal gymnastics were the focus regardless of source material. Those vocal chords became soft taffy on “How Can We Have Peace,” accompanied only by her own piano; her phrasing was like a slinky toy made of silly putty on an a cappella “Blackbird.”

With surprise guest, percussionist Sheila E, Rachelle traded some soulful commentary before E. took over the trapset. Soon the band dropped out, leaving Sheila and Rachelle to carry on one of the liveliest of musical conversations, a lengthy debate seemingly between two percussionists, each daring the other to have the last word, to match and surpass the last response.

Author Dom Cerulli (The Jazz World), speaking of Ella Fitzgerald, noted that “she seems to be unaware there are things a human voice just doesn’t to. She does them.” Rachelle Ferrell now takes the human voice beyond even Ella’s dreams.


Photos: Rachelle Ferrell (and with Sheila E) at the Dakota, May 6, 2010. Photos by Andrea Canter.
Posted by Canterjazz at 4:23 PM