Beyond Beyonce': Tia Fuller Moves Decisively Forward at the Dakota 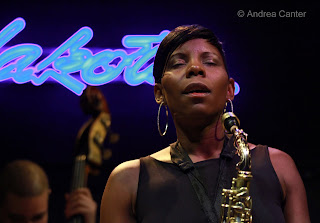 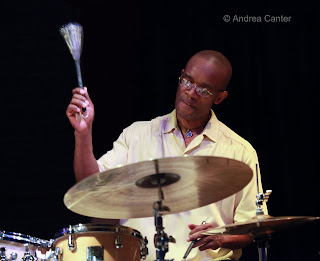 On her website, saxophonist Tia Fuller explains that she “wants people to be uplifted and experience a sense of restoration, compelling them to move forward not in fear, but in love and faith.” That drive ahead is abundantly evident on her latest CD, Decisive Steps (Mack Avenue), which I fully expect will remain on my “best of the year” list through December. (See review at http://www.jazzpolice.com/content/view/8912/79/ ) And even more so in her live gig at the Dakota. Fuller typically plays with her all-gal band including Shamie Royston, Miriam Sullivan and Kim Thompson, but for this gig she rounded up an equally talented “family” quartet (sister Shamie Royston on keys, brother-in-law Rudy Royston on drums, and young and outrageously talented bassist—no relation—Luques Curtis). They’re here for one more night and anyone who enjoys high energy post bop should grab a seat. Then buckle your seat belt.

There’s something about the black high heels, the glowing red fingernails, the multiple gold bracelets, big hoop earrings that belies the brawny force behind the alto sax. The look might still say Beyoncé (Tia’s “day gig”) but the sound hollers bits of Kenny Garrett, James Carter, Eric Alexander, Ravi Coltrane, even Chris Potter and Joe Lovano—indeed, this altoist reminds me more of the top tier of tenors than the current crop of alto players. Maybe it’s her full use of the horn from top to bottom, or the way she leaps from one interval to another, or her ability to extract such a wide palette of tones… or the internalized giant steps of her early love of John Coltrane.

The first set last night was a combination of volcanic original tunes and one sumptuous ballad (“I Can’t Get Started”), many from Decisive Steps or the earlier Healing Space. Tia and the band came out roaring on her “Breakthrough,” drummer Royston matching Fuller’s spiraling sonics which continued a good ten minutes before a break to enjoy Shamie Royston’s fluid lines and thick chords. A luxurious piano intro launched Shamie’s “Windsoar,” setting up Tia’s probing, melodic abstractions. Luques Curtis, who has been seen here with Sean Jones, took his first solo, a thumpy, bumpy display. Tia explained that her two-part Katrina Suite was part prayer, part lullaby. Just piano and sax gave “Katrina’s Prayer” an elegant start, Fuller suggesting some of the more hymnal works of Charles Lloyd. “Katrina’s Lullaby” was more celebratory than somnolent, Tia quickly shifting intervals through triumphant climbs and relaxing descents.

Tia introduced her “Shades of McBride” as a tribute to friend Christian McBride (who was just in town last week), based on his “Shades of the Cedar Tree.” Shamie Royston’s keyboard work here glittered and glowed, while husband Rudy blitzed through his first drum solo of the evening. Slowing down, if only for a few minutes, Tia demonstrated the softer side of her horn on the lovely “I Can’t Get Started,” starting with a solo sax prelude, followed by bass and drums, finally adding sparse comping from Shamie, and continuing with a restrained passion that ended in Tia’s majestic cadenza. The set came to a funky close with Tia’s “Ebb and Flow,” here the saxophonist more strongly suggesting Kenny Garrett, Curtis adding bubbling lines that suggested an electric bass.

Sometimes the level of audience enjoyment is a direct reflection of the number of smiles, grins, outright laughs from the musicians. Throughout tonight’s first set, it was hard to determine if the Tia Fuller Quartet reflected our joy or vice versa. Either way, it’s clear that we were watching, and listening, to a very bright star in the jazz sky, climbing closer and closer to zenith, and enjoying every moment of the ride.

The Tia Fuller Quartet will be at the Dakota tonight, May 25th. Be there!