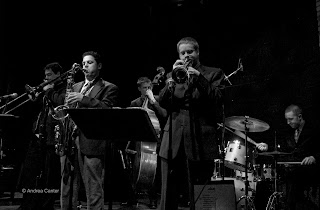 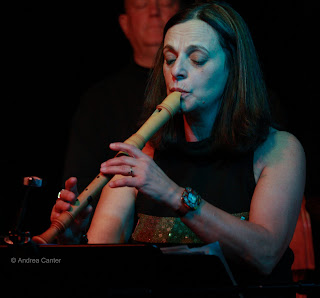 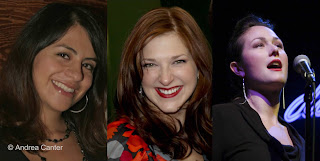 Another big weekend in local jazz. In fact the four events highlighted in this morning’s Strib (which is two more than the average number of jazz events listed each week) are just the tip of the iceberg. Just recognize up front you can not do everything; pretend you are in New York and need to carefully prioritize, organize, and live with your choices. And whatever you choose, you will have a great weekend!

The big clubs have big gigs tonight and Saturday (4/23-24): In St. Paul, the energetic brassmen of Snowblind perform at the Artists Quarter in what has become a too-rare gathering in the past year. After two strong recordings and much acclaim for their live gigs, their schedules have not permitted much collaboration lately. Aided by bassist Graydon Peterson and drummer Reid Kennedy, the front line of Adam Rossmiller (trumpet), Scott Agster (trombone) and Shilad Sen (saxophones) blows some of the most sophisticated and intriguing brass harmonies around, and their arrangements as well as numerous original compositions are the substance of a very satisfying evening of accessible modern jazz. Across the river at the Dakota Jazz Club, Cuban fireball pianist Nachito Herrera takes his usual monthly show and turns it into another “Live at the Dakota” recording session. The usual suspects are likely to be on hand, including equally explosive drummer Kevin Washington and rising vocalist, daughter Mirdalys Herrera.

One of the premiere big bands in the Midwest, the JazzMN Big Band closes out its concert season Saturday night (4/24) at the Hopkins High School Performing Arts Center with special guest, trumpeter Bobby Shew, and locally-based, internationally beloved songbird Connie Evingson. (See Tom Surowicz’s feature article in today’s Strib!) Shew is best known for his solo work with big bands, but his music has been heard for years on film and television soundtracks. With JazzMN, Shew will bring us not only some favorite standards but some new music from German and Belgian composers. For her part in the program, Connie will give us an arrangement of Clifford Brown’s “Dahoud.” It’s never business as usual with a JazzMN concert!

Sunday (4/25) offers far more options than usual, and of course they conflict with each other: The Twin Cities Jazz Society brings another of its Jazz From J to Z concerts into the city with “Blue,” a vocal showcase featuring Katie Gearty, Nancy Harms and Rachel Holder at the Capri Theater (3 pm). The revue strings together songs that explore the many connotations of “blue” – the blues, the feeling, the color. First class rhythm section features Tanner Taylor, Graydon Peterson and Jay Epstein. Back in St. Paul at the classy Commodore Hotel, also at 3 pm, Alma Brasileira (Joan Griffith, Clea Galhano and Lucia Newell) release their sparkling tour of Brazil, Circle of the Dance, music drawn from the great Brazilian composers from Jobim to Pix as well as Joan Griffith originals, with lyrics from Lucia Newell and Janis Hardy. The results are elegant, particularly the combination of guitar and recorder; Lucia’s voice has never been more beautifully highlighted. The trio are joined by Laura Caviani on piano and Gary Gauger on percussion, and a few of Joan’s guitar students will join the party. Joan warns that the Brazilian drinks to be served are far more potent than they first appear!

But there’s more on Sunday! At the Dakota, a long-awaited visit from clarinetist/saxophonist Anat Cohen materializes in the Israeli artist’s “Benny Goodman and Beyond” tour, with a quartet that goes beyond “rhythm section” – pianist Benny Green, bassist Peter Washington and drummer Lewis Nash. The foursome first performed this tribute at the Village Vanguard nearly a year ago and recorded the project on Cohen’s Anzic label, released just a few weeks ago (Clarinetwork). One of the best known of a generation of young Israeli jazz artists who are making major waves in New York, Cohen pays homage to hero Goodman but takes the music far beyond its roots. Sunday night also marks the return and expansion of Soul Café, the jazz trio (Laura Caviani, Steve Blons, Brad Holden) that for five or six years held nearly monthly mergers at Hennepin Avenue United Methodist Church with local and national poets to highlight the complementary shadings of jazz and poetry. Often joined by Lucia Newell, this reunion of Soul Café brings in not only Lucia but also bassists Jay Young and percussionist Darryl Boudreaux. At Hennepin Methodist, in the Art Gallery, Soul Café and guest poets will explore the “season of fertility.”

A couple events out of the ordinary this coming week: On Wednesday night (4/28), author Quincy Troupe (Miles: The Autobiography, and the Peabody Award-winning The Miles Davis Radio Project) will talk and read from his work at Coffman Union on the U of M campus as part of the NOMMO African American Authors series. Also on the U of M Campus at Ted Mann Concert Hall, two back to back concerts highlight the Marimba 2010 International Festival. On Wednesday night (4/28), “A World of Marimba” brings together some of the world’s top marimba artists in a free performance; the next afternoon (4/29) at Ted Mann, you can hear the U of M Symphony with marimba artists. Connected to the festival, on Thursday night (4/29), the Southern Theater presents So Percussion, a mallet ensemble from Brooklyn premiering two new works. And on the subject of mallets, remember that Dave Hagedorn, my favorite mallet guy on the planet, appears with Pete Whitman’s X-Tet nearly every month at the Artists Quarter, and this month the date is Wednesday (not Thursday!) at the AQ (4/28).

There’s more in town all week, our usual bevy of vocalists and instrumentalists from swing to free. Check Pamela’s calendar on Bebopified (www.bebopified.blogspot.com) or the Twin Cities Jazz Society calendar (www.tcjs.org) or look for highlights on Jazz Police (www.jazzpolice.com).