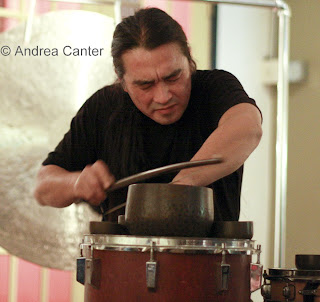 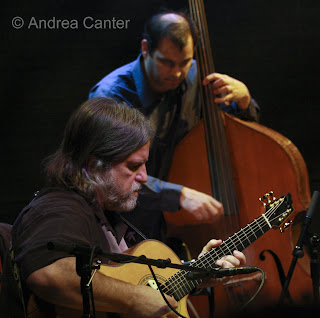 Jazz in all its varied glory can be found throughout the Cities this week, from art galleries to jazz clubs to theater stages. On Tuesday I attended the opening of Coward’s Women, a Guthrie Theater production that brings together the “two sides” of the great and hip playwright/actor/songwriter/bon vivant. A musical revue, the talents of Maud Hixson and Erin Schwab converge in a well –paced, cleverly organized show that brings out the best in both singers. Maud, the model of subtle and tasteful expression, and Erin, typically bold and dramatic, play off each other’s strengths but add some delightfully surprising turns, Erin revealing a sweeter side, Maud showing a bright burst of brash theatrics (“Nina”), and the two harmonizing with utter charm. And don’t miss Music Director/pianist Rick Carlson’s so very hip narration. Two more nights at the Guthrie, Friday and Saturday (4/2-3), in the 9th floor Dowling Studio theater give you not only some great music but the best view of the city.

From Noel Coward hip to the 21st century Gong Show stuffed into a small Nordeast art gallery? Japanese percussion monster Tatsuya Nakatani returns to Rogue Buddha on Saturday (4/3) for a reprise of 2009’s stunning experiments with a double dose of bass antics from Adam Linz and Chris Bates. The show in winter 09 was filled with new sounds and new visions, Nakatani surrounding himself with hanging gongs of all sizes as well as a variety of standard and unusual percussive devices. He performed a short solo set that began and ended with the largest, deepest gongs, joined Chris and Adam for some interactive hocus pocus, and yielded the floor to some solo and duo bass-ics. I recall Chris stuffing a toilet brush into the space behind the strings. The rumor is that Nakatani is bringing more gongs this time and, of course, you never know what Adam and Chris will think up next. It’s a small space with a large agenda. And it should end in time to follow Chris to the Dakota to join the Tim Sparks Trio (with Jay Epstein) in a Late Night series gig, playing music from Tim’s gorgeous Little Princess (Tzadik, 2009), music fusing jazz structures and East European folk melodies.

There may be no other modern jazz pianist with as much star press as Brad Mehldau. He’s not even 40 til later this year but he has amassed a discography that most veterans twice his age would envy, largely in trio format but with a few exciting collaborations (with Pat Metheny, Willie Nelson and Renee Fleming!) and a brand new large ensemble project (Highway Rider) with Joshua Redman. (I hear they will be at Walker next season.) Mehldau and his trio of Larry Grenadier and Jeff Ballard—heir apparent to the Keith Jarrett Trio in terms of longevity, telepathy and critical acclaim—will be at the Dakota for two nights, 4/6-7. Sometimes I think his reverence for form gets the best of him, but overall Mehldau’s compositions and improvisation, as well as impeccable technique and touch, make him a must-see among his generation of creative artists.

Easter Sunday (4/4) might mean family gatherings but it also means special music at the Dakota. Brunchers will be treated to Maud Hixson with the Laura Caviani Trio (Gordy Johnson and Phil Hey) – some of the area’s favorite musicians who will be coming together for the first time. Hopefully this will be merely the start of something good. For Easter evening, what could be finer than the Sounds of Blackness? This is a large ensemble of award-winning voices, and the plan is to have varying combinations of singers to best fit the space on stage.

Plenty more in the realm of experimental music this week—a CD release for Jello Slave at Open Eye Theater (Friday and Saturday, 4/2-3); Milo Fine Free Jazz Ensemble at the West Bank School of Music on Friday; Fat Kid Wednesdays in their usual Monday night slot at the Clown Lounge (4/5); and something—not sure what—will prickle your ears at the Clown on Tuesday (4/6). Perhaps less experimental but surely on the edge, the Easy Company ensemble returns to the Artists Quarter on Wednesday (4/7) with Bill Carrothers, Chris Bates and Jay Epstein reprising their 2009 CD release. Of course anytime Bill comes to town, it’s an exciting gig. Also exciting is the collaboration recently initiated among vocalist Nancy Harms, pianist Bryan Nichols and bassist Chris Bates, which will be in the spotlight at Barbette in Uptown on Thursday (4/8). Nancy has steadily moved from competent swing to a more personal, unique approach to jazz vocals, and with such partners as Bryan and Chris, a “road less traveled” trajectory seems assured.

Other singers of note this weekend – see Nichola Miller at Hell’s Kitchen (4/2); Debbie Duncan with Laura Caviani Trio for a rare two-nighter at Crave in the Galleria (4/2-3), and Debbie with Mary Louise Knutson on Tuesdays at Camp Bar; Nancy Harms with Vital Organ at Hell’s Kitchen (4/3); Charmin Michelle at Crave in the West End (4/4) and at Fireside Pizza (4/5); Maxine Sousé with Doug Haining and Reynold Philipsek at Fireside Pizza on Wednesday (4/7). And the usual suspects—Joann Funk and Jeff Brueske at St Paul Hotel Lobby Bar (4/2-3), Zacc Harris Trio at Riverview Wine Bar (4/5), Tuesday Night Band at the AQ (4/6), Wolverines at Hell’s Kitchen (4/7), and Phil Hey Quartet at the AQ (4/8) -- keep great jazz a predictable benefit to living in the Twin Cities.

Coming Soon! Part of the Jewish Film Series at the JCC in St. Louis Park, “The Jazz Baroness” details the life and jazz advocacy of Pannonica Rothschild de Koenigswarter (aka Nica), a life that included her longtime relationship with Monk and more (April 13); Chick Corea and Gary Burton reprise Crystal Silence at the Dakota (4/16-17); Joan Griffith/Clea Galhano/Lucia Newell and friends celebrate the CD release of Circle of the Dance at the Commodore (4/25); Soul Café returns for at least one gig at Hennepin Ave Methodist Church on 4/25; Anat Cohen Quartet salute to Benny Goodman at the Dakota, also 4/25; Ellen Lease, Pat Moriarty, Adam Linz and Phil Hey dream up all sorts of mischief at Studio Z on May 1.


Photos: (Top to bottom) Tatsuya Nakatani at Rogue Buddha; Tim Sparks returns to the Dakota; the "Easy Company" trio of Bill Carrothers, Jay Epstein and Anthony Cox returns to the AQ. (Photos by Andrea Canter)
Posted by Canterjazz at 10:56 PM