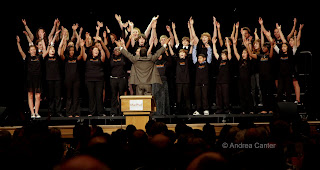 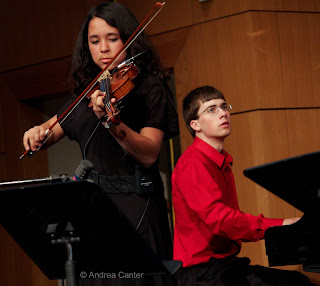 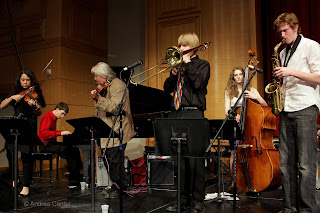 Every year, going back at least six or seven it seems, the MacPhail Center for Music holds an unusual fund raising luncheon to build resources to support its financial assistance and outreach programs. MacPhail relies on an approach to charitable giving known as the Benoven Model, which is the most gentle means of arm twisting imaginable. In fact it is more like hand shaking than arm twisting. It goes something like this: Start with a core of supporters who run the gamut from the ultra wealthy patrons of the arts to ordinary folks who are involved as instructors, students or casual admirers or the MacPhail programs. Ask them to invite friends and colleagues who share their interest in music for lunch—no ticket to buy, no pledge required. Just come for an hour, enjoy a light meal, be entertained by a sampling of student performances and listen to a few brief (really!) testimonials and comments about MacPhail. At the end, hand out donation sheets and envelopes, collect any that are filled out, let guests know they can send something back at any time, and then do not ever call them asking for money. Maybe they will donate next year.

Using this approach, MacPhail has been raising $400,000 and more at the annual Music Matters Luncheon. And it all goes toward supporting students and community programs—corporate donations cover the cost of the luncheon. Along the way, a lot of people have been awed by the beneficiaries of this funding and the scope of MacPhail’s efforts to bring music to the community.

Today MacPhail serves over 8,000 students, from infants to centenarians, from Suzuki violin to gamelan ensembles, from hip hop to arias, from the music of Charles Mingus to the preludes of Bach. Nearly half of those 8,000 students receive some degree of financial assistance from MacPhail. One of the largest community music schools in the country, the program philosophy is simple—music is for everyone.

My involvement with MacPhail is relatively small. I’ve attended jazz concerts, a few master classes, maybe five jazz appreciation classes. I’ve heard trumpeter Ron Miles, vocalist Janice Borla, pianist Anat Fort, the Kelly Rossum Quartet, Jazz Is Now, Sisters in Song, and more. I’ve learned some jazz history, discussed Miles Davis and Ornette Coleman, and listened to the nuances of Kind of Blue. Some are third generation MacPhail students. Some have stories about grandparents who studied or taught at MacPhail. It’s been part of the cultural fabric of the Twin Cities for more than a century. They have a shiny new state of the art building and performance space, but none of the building costs came from this annual fund-raiser—those funds support students directly, not stages or wages. That’s why I have been a table host or co-host. I want my friends who love music to know MacPhail.

My other involvement with MacPhail has been through the Dakota Combo as a member of the Board of the Dakota Foundation for Jazz Education. The Dakota Combo is a MacPhail student ensemble that receives its primary funding through the DFJE. It’s a true community partnership. Naturally the Combo has been called upon to entertain at MacPhail functions, like the Music Matters Luncheon. This year the Combo played on the Convention Center stage as about 1,000 came in to find their table and host. The Combo rhythm section was on stage to support one of the newest MacPhail projects, the Gospel Choir directed by J.D. Steele. And as guests left, the Combo played another half hour set, this time with master violinist Peter Ostroushko. (How many jazz bands have two violins? Here the Combo had its own Zosha Warpeha in tandem with Peter O.) Normally director Adam Linz would have been right there supporting his teen charges, but Adam was busy playing bass for MacPhail’s hip hop ensemble in the lobby. But by now, the Combo is quite able to self direct.

The Combo was not the only exemplary reflection of the MacPhail program. The luncheon opened with a young college graduate who found her operative voice at MacPhail. Her aria from Gianni Schicchi by itself was reason to fill out the donor card. Later in the program we saw a moving video of two brothers, now in their teens, whose classical music talents have been nurtured through the financial aid available at MacPhail. Then, live stage, the brothers (violin and piano) gave us yet another reason to be part of the MacPhail family. The new gospel choir was yet another, bringing together not only a diverse body of young singers but also bringing together the jazz and voice programs.

It’s the sort of community benefit that makes you want to sign over the deed to your house, your first-born.

Just this morning I read that the St. Paul Public Schools will eliminate music lessons for elementary school students as one of many cost-saving measures. Every year, MacPhail needs a longer reach.