With Hiromi, Solo is the Place to Be 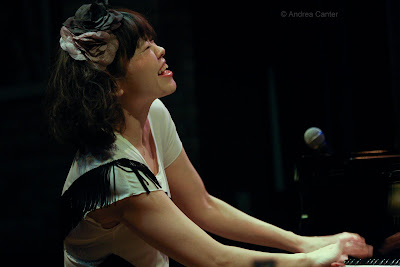 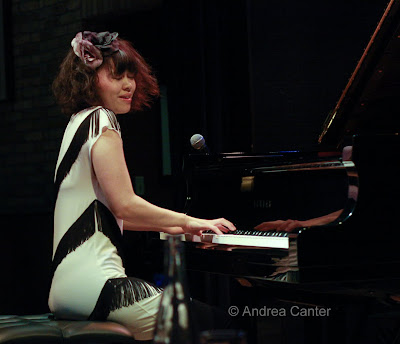 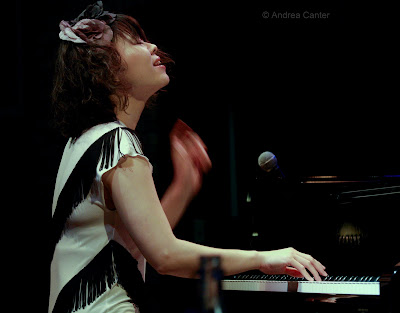 I saw her Friday night (March 5) in Chicago at the Jazz Showcase and was entranced. I saw her Monday night at the Dakota and was thoroughly dazzled and charmed. I saw her again Tuesday night, and by the end of the last set, I was convinced I had heard the most exciting night of piano jazz in my own history. The best? Probably not a fair question…. I’ve seen Jarrett, Peterson, Brubeck, McPartland, Hersch, Barron, Tyner, Jamal and more. Hiromi is only 30—it’s too early to burden her with “legend” status. But it is not too early to predict she will get there. For now, let’s say she may have few living peers in terms of her combination of virtuosity, ferocity, and even delicacy. It’s an exhilarating, and charming, package.

Hiromi burst on the scene about seven years ago, barely out of Berklee and creating a stir with technical wizardry that conjured Art Tatum and girlish pizzazz that charmed the coolest audience. She quickly recorded a series of albums with her Berklee-cohort trio (Tony Grey, Martin Valihora), then added wild guitarist David Fiuczynski to form her SonicBloom Quartet. Her chops still dazzled but her increasing use of electronics engaged new fans while somewhat alienating others. Nevertheless, her compositions repeatedly yielded a wide palette, from lyrical fusings of Eastern and Western harmonies to free-wheeling mélanges of ever-shifting rhythms and tempos. Tatum, Jarrett, Evans, Coleman—the entire history of jazz seemed tightly wound inside one small woman whose energy seemed endless.

Sometime in the past year, new layers of Hiromi emerged. Or rather, layers of Hiromi seemed to peel away as she engaged in projects away from her own quartet. First came the duet album with Chick Corea (Duets), reuniting her with a past mentor with whom she once shared the stage as a teen in her native Japan. The 2-disk set is gorgeously acoustic, and arguably Hiromi upstages one of her heroes. Next, Stanley Clarke formed his first all-acoustic recording project with Lenny White and Hiromi, yielding one of my favorites of the year, Jazz in the Garden, and initiating a tour that landed at the Dakota in October. It was, at the time, the most inspired and inspiring performance of Hiromi that I’d witnessed, as if freed from electronics and her “wild woman” expectations, she truly blossomed. Not that her performance was sedate or conservative—the explosive creativity, the inhuman speed, the quick shifts of direction were ever-present. But somehow it seemed more joyful and more personal.

And finally the last layer peeled away, and Hiromi released a solo acoustic recording early in 2010, Place to Be. Her liner notes explain the collection of mostly original compositions as reflecting her experiences as she traveled the world on tour, but one also wonders if the title also refers to a more “inner” place, a place where nothing stands between the musical mind and piano, no distractions, no responsibilities, just artist and instrument.

The more I hear Hiromi, and particularly the more I hear her in these new contexts, the more I hear Ahmad Jamal, one of her early mentors and producers. Beyond her titanic technical skills—she probably plays more notes at greater velocity than anyone in jazz history save (perhaps!) Art Tatum, Hiromi, like Jamal, is a master of surprise, a magician in use of time and space. Within a few bars she transforms the rhythm, the tempo, the mood. She can turn on a dime, a sudden halt and feint left or right, a thunderous arpeggio suddenly reconfigured as a delicate trill. Or simply a languorous pause. And with that pause, a look toward the audience with an impish glint—something new is coming next, and we are clueless. It’s that anticipation of the unknown that can sustain our interest through a dozen shifts in direction, through a story seemingly without end. It’s the journey that makes the destination both irrelevant and ultimately perfect.

Full review to be posted shortly on JazzINK. Photos of Hiromi by Andrea Canter, March 8, 2010 at the Dakota.
Posted by Canterjazz at 10:45 PM