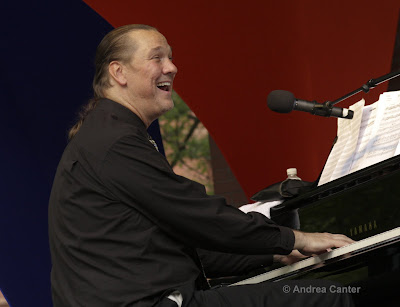 We’ve gotten accustomed to referring to pianist Jon Weber as “encyclopedic” regarding his factual as well as artistic knowledge of music. But in this day of Wikipedia and smart phones, it seems anyone can access information with a few keystrokes. Still, Jon Weber’s brain not only retrieves more quickly than a Blackberry, but it links with equal ease to related tidbits and anecdotes, and like a good synthesizer, then reprocesses and reloops that information into the improvisations spinning from his keyboard. All while carrying on a mile-a-minute conversation with his audience.

Jon Weber has been a fixture of the Twin Cities Jazz Festival for much of the past decade, serving as the “house pianist” for other visiting artists and performing in trio or quartet contexts, often at multiple venues. He’s also played gigs in between festival dates at the Dakota and Artists Quarter, building a larger and larger audience with each visit. Last night, festival producer Steve Heckler brought Jon back to the AQ in conjunction with his other big project, the St. Paul Winter Carnival, and as it turned out, it was indeed a carnival performance, a three-ring circus of often hilarious commentary, virtuosic music, and amazing feats of cerebral gymnastics. But this no mere spectator show but one that involved ongoing interaction with the audience. And that audience was one of the largest I’ve seen at the AQ in quite a while. Despite the sleet and earlier start time, it was standing room only by the time Jon moved from solo to trio.

If one were to create a jazz robot, it would resemble Jon Weber—physically imposing (6-6? with a long braided pony tail), a photographic memory (of music, composers, musicians, and whatever else he happens to come across), the ability to transpose instantly to any key or to adopt the style of any genre or artist, and the penultimate multi-tasker. But unlike a robot, Jon oozes passion for his art and considers each gig as much a social as musical event.

We’ve come to expect that long first set with Jon alone on stage with just the piano and internal processor, and last night’s 90-minute opener suggested a night of Art Tatum, Victor Borge, Milton Berle and the $64,000 Question. Well, maybe that dates me too much.... So let’s say it was by far the best house party I ever attended. Jon brings no pre-conceived set lists—he immediately asked for “a number between 1 and 8” and then asked “sharps or flats?”, and soon had launched “I Didn’t Know What Time It Was” in the resulting key of E, joking that the choice of tune was to honor the latecomers expecting the usual 9 pm start time. And so those connections would continue, as “Darn That Dream” prompted a short history of Broadway flops before Jon went into the tune, first switching melody from right to left hands, then switching keys. A request for some James P. Johnson stimulated a short bio, which in turn led into the works of Herman Hupfeld, who shared Johnson’s birthdate. Did we know the four tunes written by Herman? “As Time Goes By” went by very quickly, followed by “Carolina Shout” by Johnson, now played in the style of Errol Garner. When asked for one of his original compositions, Jon played “Mr. Clecky,” written at age nine and originally titled “Jon Weber, Attorney at Law” as the theme to a fantasy television series, later renamed in honor of a piano teacher. “But I started out on a toy organ at age three,” he tells us, then launches into the only tune Fats Waller recorded on organ, “Going to See My Ma.”

Periodically, Jon’s fascination with numbers and biographical trivia triggered an audience quiz—“Peru—there are only five countries with 4 letters...Bolivia...Do you know there are 43 countries with 7 letters? Anyone give me the rest and I’ll buy you a drink.” Suggestions flew from the audience throughout the set, including a printed list that he read without missing a chord change. “This is pretty good. Did you look this up on your Blackberry?”

Jon continued to take audience requests, for a style, a composer, a specific composition, enjoying the esoteric suggestions but never stumped. He gave us everything from “Here Comes Peter Cottontail” (a tune he played on Marian McPartland’s Piano Jazz), “Seven Steps to Heaven,” Mingus’ “East Coast Shuffle,” “Round Midnight,” “Song for My Father” (“written by one of the last five surviving musicians in Art Kane’s ‘Great Day in Harlem’ photo—can you name the other four?”), “Satin Doll,” and even the ringer, “Rootbeer Rag.”

When he finally motioned for Gordy Johnson and Kenny Horst to make it a trio, Jon probably owed at least three drinks. The fun continued for another hour as the trio furthered the eclectic tone of the evening with the Iceland national anthem, “Lulu’s Back in Town,” a melding of Bonfa’s “Gentle Rain” and “Laura” from Dr. Zhivago, “Lullabye of Birdland” infested with licks from “If I Only Had a Brain,” and a ferocious version of “Rhythm-a-ning” with a stride interlude.

Jon took his first break after about two and a half hours. Dan, behind the bar, announced it was the longest set in the history of the AQ. But I’m not so sure, I remember the first time I saw Jon at the AQ, he played right through the break, sending his bassist and drummer off stage. His energy never wanes and his brain never disengages. And all the while, his grin and gleeful attack suggest that three-year-old tearing into the toy organ.

Photo: Jon Weber at the 2009 Twin Cities Jazz Festival. He seemed surprised to see his own big smile. I doubt it would surprise anyone else. (Photo by Andrea Canter)
Posted by Canterjazz at 4:29 PM