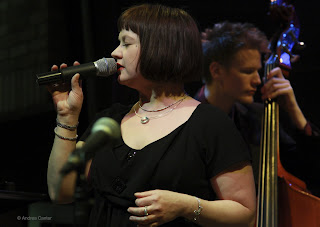 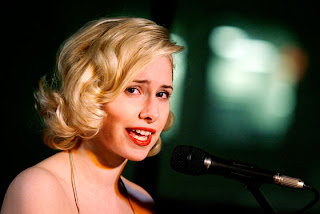 © Andrea Canter
Every other CD I receive for review comes from a vocalist. And locally, at least, it seems that there are three or four vocal gigs for every instrumental ensemble booking. Vocalists--jazz, pop, blues or R&B—have long been the bread and butter of clubs and larger venues, from the days of big bands through rock ‘n roll and acid rock. If you can sing, someone will hire you. If you sing well, they might hire you again. And if you sing really well, you might become a media star. Short of a jazz icon like Wynton Marsalis (who maybe is the only jazz icon of 21st century popular culture), instrumentalists just don’t attract the attention of the general public. Everyone relates to singers. We can all sing. Maybe badly, but we can, and do, sing, if only in the shower. Most of us do not dabble in saxophone, trumpet or even piano. But there is a downside to the popularity of vocal music—how does a given artist stand out in the crowd? And such a big crowd?

Relative to an instrumentalist, a singer needs more than music to connect to the audience. For whatever reason, audiences seem to take good intonation, phrasing, and even improvisation for granted in vocal jazz. No so with the saxophone or trumpet—beyond a pleasing tone, if the horn or bass or keyboard player can not communicate through his or her music, the audience won’t ask for more. And if the musician does communicate through his or her music? The audience will be happy... and won’t ask for more. But bring on a vocalist, and we expect a relationship that extends beyond music. We want personality. We want interaction. Sometimes what we really want is theater.

Two singers on the Dakota stage this week can attribute some of their popularity to their ability to bring theater into their performances. If they suddenly chose to just sing their setlists, no matter how artful and personal, they would probably get less than stellar reviews. The music is not enough. Why can’t we be friends, too?

Let’s start with Christine Rosholt, hometown girl makes good. Now about six years into her singing career at the ripe age of 45, Christine started out in theater—as a student at the Children’s Theater who gradually moved into the world of jazz singing. And it has been a gradual and steady rise. A few years ago, Christine was building her audience, at least as much as a result of her utterly charming, interactive stage persona as her specific attributes as a vocalist. She stood out in a sea of capable singers because she could sell herself and her songs—even without singing a note. She told stories, she joked with the band, she chatted with the audience as if at a cocktail party, and it never seemed like a put-on. And it might have been one of the most effective strategies in artistic survival. Charm and pizzazz gave Christine a devoted audience while allowing her time to grow as a musician.

Today, Christine charms as much with her melodies, her phrasing, her interpretations, her song choices as she does with her banter and perky smile. She’s bringing her own character, comedy and drama into her music, not just her show. She can pull your heart out with an achingly slow “Smile” or make you smirk with her interpretation of Dave Frishberg’s “I’m Hip.” But still, no matter how strong she is vocally, no matter how “hip” her band, we always expect to have a good time with Christine--the person, the actress, the comedienne, the friend... and oh yes, the singer.

There may be no singer on the jazz or pop scene today who generates more drama and comedy than Nellie McKay. She writes outrageous lyrics, conjures memories of Tiny Tim with her ukulele, is wickedly funny, and seeks audience response. For the uninitiated who saw her for the first time at the Dakota a year ago, her performance bordered on bizarre. Apart from all that, she also could sing and play piano (and of course ukulele), although what one remembers later is the drama more than the music. Recently she released a tribute to Doris Day (As Normal as Blueberry Pie) which is far less satire than some might expect, but we did expect the new show at the Dakota to be liberally sprinkled with Doris songs, albeit cloaked and daggered in Nellie McKay. For some reason this surprised or disappointed Strib writer Jon Bream, who reported that McKay’s opening night was essentially the Doris Day songbook and that McKay did not make the connection with her audience as she has so easily done the year before. Were we at the same show?

Bream is as entitled to his opinion as I am to mine, but I object to one individual speaking for an audience of about 200. OK, Jon, so Nellie did not make that connection with you. She was not sufficiently over the top. All those Doris tunes seemed to wrap McKay in a conservative blanket? Personally I thought she was understatedly brilliant. She didn’t beat me over the head with her drama like last year, she more gently tugged me into it. And the show was hardly a Doris-a-Thon—at least ten of the 20 or so tunes were original Nellie McKay fare, clever, outrageous, sometimes hysterical lyrics that outsize Dave Frishberg or Mose Allison. She’s more like Patricia Barber on happy pills. Didn’t connect with the audience? There I was, stuck in the middle of the main floor where I could barely see patrons along the far edges of the bar or the back end of the mezzanine. So I can’t account for their reactions. But the folks around me seemed thoroughly engaged, smiling and applauding, standing at the end to entice another encore. Had the audience made a better connection with Nellie, there might have been a riot when she left after encore #2.

But back to my main thesis—the drama, or in Bream’s opinion, lack of drama, seemed to color at least one man’s enjoyment (or lack of) of what was really pretty darn good music. Nellie is not Doris Day although she gently satirized the perky blonde bombshell while competently singing such Doris tunes as “The Very Thought of You,” “Sentimental Journey,” and “I’m in Love With a Wonderful Guy.” Sounding even a little bit like Ella, Nellie brought some theatric touches to “Tisket a Tasket”; and sounding slightly like Patsy Cline, she gave a sincere rendering of “I Go Walking After Midnight.” Her own songs ranged from charming to insane, and her versatility was evident from playing solo piano, solo ukulele and fronting a band drawn from Prairie Home Companion regulars. It’s not a big voice, but a voice that slides easily in and out of whatever the character of the moment.

If she were to present the songs without the drama of her accompanying stories and explanations, we might not remember much. A lot of competent singers tackle the Doris Day songbook. And there are others who write clever lyrics. But there is only one Nellie McKay. And she is not “as normal as blueberry pie.”

She charmed the heck out of me.
Photos: Christine Rosholt (with bassist Graydon Peterson) at the Dakota in early 2009 (by Andrea Canter); Nellie McKay (press photo by Leon Retna).
Posted by Canterjazz at 4:32 PM