December 2009 -- The Month of the Young Jazz Artist 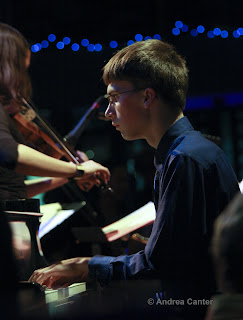 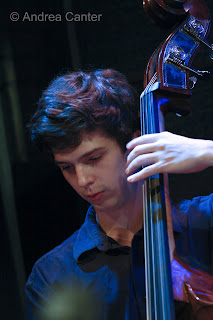 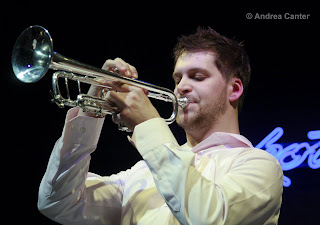 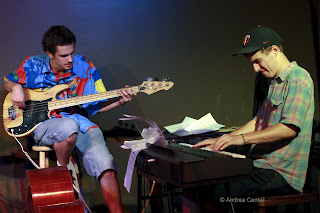 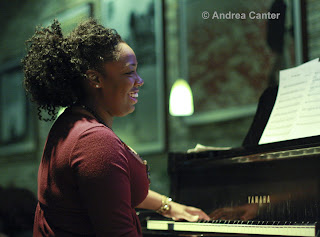 It’s no surprise that the holidays provide opportunities to hear former Twin Cities’ jazz artists live as they return to spend time with friends and families. We count on The Bad Plus for an annual residency at the Dakota between Christmas and New Year’s; we can usually count on a night or two with Bill Carrothers at the Artists Quarter. Bruce Henry has made more frequent “homecomings” in the past year but, of course, we expected him this holiday season and were not disappointed. Maybe we hoped Kelly Rossum would make a holiday visit, but we’ll just have to wait a few more weeks for his first return since moving to New York a few months ago. (He’s back at the end of January to record a live session with Pete Whitman’s X-tet.)

Holidays also mean breaks for college students and recent grads who return for some family time and, sometimes, the opportunity to schedule a gig or two with past cohorts and new collaborators. Thanks to programs like the early sets at the AQ, late nights at the Dakota, and small clubs open to new talent (e.g., the Clown Lounge, Rogue Buddha), our young musicians are finding venues to try out new compositions, new configurations and rapidly advancing skills. December 2009 was a month of incomparable opportunities to catch up with young jazz musicians, from high schoolers through recent college grads now living (and working) from coast to coast.

The Dakota Combo, now in its fourth edition, performed its first public gig on December 5th, in prime time at the Dakota with visiting guest artist Tia Fuller. This program (a joint effort of the MacPhail Center for Music and Dakota Foundation for Jazz Education) has an amazing track record for helping launch successful college careers (to such programs as the Brubeck Institute, New England Conservatory, Juilliard, New School and more); I predict that within the next few years we will be reading about Combo alums in the pages of Jazz Times and Downbeat as they transition to fulltime professional careers. The Combo this year boasts only two seniors, but their limited experience is offset by their dedication and enthusiasm, as well as considerable talent. Fifteen-year-old pianist Quentin Tschofen confidently tackled “Monk’s Dream” solo in the first set, then returned in the second with two originals supported by the full Combo. “Drunken Monkey Framing Company” could have been another Monk composition with its playful and jagged lines, while his “Neither Here Nor There” inspired guest Tia Fuller to solos worthy of a jazz classic. As a whole, the Combo has been exploring very interesting, ambitious music unlike the usual playlists for high school musicians (e.g., compositions by Mingus, Tim Hagans, Peter Erskine), as director Adam Linz has high expectations—and confidence in the level of commitment and musicianship already present in these seven artists.

Two weeks later, despite a scheduling mixup, a quartet of somewhat older area musicians proved the value of their early college studies at the Artists Quarter under the band name “530” – the Chicago apartment number for pianist Chris Misa and drummer Rob Fletcher, halfway through their first year at DePaul University. Bassist Cory Grindberg—an alum of the Dakota Combo—is in his first year at Northwestern; Remy Taghavi is in his second year at USC, where he augments his classical bassoon studies with jazz saxophone. The quartet played mostly original compositions, each musician clearly ready to hold his own as writer and player.

And a few days later, I had the pleasure of attending a private jazz party at the St. Paul home of Daniel Duke, now a bass student at William Paterson University in New Jersey. Daniel was part of the first edition of the Dakota Combo, as was pianist Javier Santiago. Javier went on to the Brubeck Institute (a single quartet or quintet selected for a one or two year tenure at the University of the Pacific), and is now at the New School in Manhattan. Rounding out the trio was drummer Miguel Hurtado, finishing studies at the Manhattan School of Music. I remember Javier and Miguel playing together as young teens in The Eggz and in other bands, well before finishing at Minneapolis South. The grand piano filled most of the living room, the three musicians were barely two feet apart, and the audience crammed the adjacent dining room and perimeter of the living room. But all-acoustic music from a few feet away gives you the sense that you are part of the beat; Miguel controlled his drumkit such that we were not driven out of our seats by sound or vibration. The trio played original compositions and standards with the skill and passion one would expect at a small New York club. Soon we will be paying for the pleasure.

Javier turned up again a few days later with the John Raymond Project at the Clown Lounge. Trumpeter John graduated last spring from the UW-Eau Claire, having spent the previous 4-5 years gigging almost as much as attending classes! I first caught John barely out of high school with the Jazz Is Now ensemble, then a year or so later as he launched his JRP late one night at the Bryant Lake Bowl Theater. Since then, he has played a number of gigs at the Dakota, with his own band and with Nachito Herrera. Now working toward a master’s degree at SUNY Purchase outside of New York City, John wasted no time finding a few gigs over the holidays. Maybe the only thing that impresses me more than John’s entrepreneurial skills is his musicianship, as composer and performer. With Javier on piano, John brought in frequent cohorts from UW-EC days, Aaron Hedenstrom on sax, Jeremy Boettcher on bass, and Brian Claxton on drums. It was a diverse set highlighting compositions of the band and a few interesting covers—Nicholas Payton’s “Backward Step” and John’s gorgeous arrangement of “O Come, O Come Emmanuel.” There’s always a spiritual core to John’s music and a Miles Davis feel to many of his arrangements; Javier’s solo on “Emmanuel” was simply beautiful.

In addition to leading the Dakota Combo and jazz program at MacPhail, bassist Adam Linz is a resource for young artists seeking playing opportunities. Through his connections with Rogue Buddha Gallery, he organized an evening of new bands, new music, booking two bands under the leadership of young Joe Strachan to bookend one of his trio projects. On December 27th, the Joe Strachan Trio played the first set in the gallery, the 30 or so chairs filled and a number of parents, friends and area musicians standing. Joe, a 2009 Dakota Combo alum, attends the Lawrence University’s Conservatory. Combo cohort Cory Grindberg was on bass, along with current Combo drummer Cameron LeCrone, just a senior at Minnetonka High. Cam, Cory and Joe were the Combo rhythm section last year, when Cam was the lone junior in the band. The trio took apart “Cry Me a River”; reworked a Bulgarian folksong that attracted Joe’s attention on a recording of the Bulgarian Women’s Choir; and played a new arrangement of Cory’s “Faded”—originally played by the Combo with trombone and trumpet, but even funkier without horns.
Joe and Cory returned for the last set, as part of the quintet “Metropolitan Port Authority,” joining Remy Taghavi, trumpeter Jake Baldwin (another Combo alum now at the New England Conservatory) and drummer Isaac Zuckerman (former student broadcaster at KBEM, now at the University of Colorado). MPA came together last summer and recorded a CD of original compositions. Sounding tighter and more confident, the quintet blew through a well-paced, exhilarating set of mostly originals—Remy’s “Starlight Waltz,” Cory’s “Tiny Lacerations” featuring Jake on pocket trumpet, Jake’s “Sock Monkey Esquire,” and a fascinating arrangement of a Philip Glass composition, “Rubric.”

The final “young lions” outing of the month was aptly titled “Young Lions Showcase,” a prime time gig at the Dakota. The band took on varying identities and shapes throughout the evening, with a core quartet of Paris Strother on piano, Chris Smith on bass, Brandon Commodore on drums, and John Raymond on trumpet. For the most part, this was the post-grad lions’ den, Chris still completing studies at New School after two years with the Brubeck Institute and touring with Jeff “Tain” Watts and Jose James. Paris, who at 17 played the opening set to inaugurate the “new” Dakota in fall 2003, graduated from Berklee in Boston in 2008 and is currently working with outreach programs of the Monk Institute in Los Angeles. Brandon completed studies at McNally Smith and now tours with Sounds of Blackness and Mint Condition. Paris’ twin sister Amber (also living and working in LA) and Brandon’s younger sister Ashley (finishing her degree at DePaul in Chicago) added some lovely vocals throughout the set and, again, Javier Santiago appeared for a few tunes, as did Aaron Hedenstrom. Even mom Ginger Commodore got in on the act with a rousing “My Favorite Things,” engaging John in a scat and trumpet duel. With Javier and Aaron, John reprised his arrangement of “Emmanuel;” the quartet offered an initially disguised reading of “Footprints;” Amber was stunning on “My Man’s Gone Now;” Chris was very mellow on electric bass as Paris covered piano and electric keyboard on her “Half Moon Lullabye;” Ashley gave “Orange Moon” some R&B flavors; both singers added vocalese harmonies to Paris’ “Tree in the Desert.” Paris and Chris go back to grade school at Ramsey Fine Arts in south Minneapolis, and honoring her longtime friend, Paris wrote the gently assertive “CCS.” Perhaps the most engaging of all were the Strother and Strother composition,“Migration” (with both Paris and Amber adding vocals) and the Ramsey Lewis arrangement of the theme from “Spartacus,” featuring inspired solos from Paris and Chris.

The value of jazz education, starting well before high school, was clearly illustrated at each of these sessions. In addition to the impact of the Dakota Combo, these musicians reflect the benefits of middle school jazz programs like Ramsey Fine Arts, high school jazz bands, summer jazz camps (many of these artists first met at Twin Cities Jazz Workshop, MITY, or Minnesota Youth Jazz Band) and community music schools like Walker West and MacPhail. And the support of family can not be underestimated. At each of these gigs, the audience—large or small—included parents and siblings. Daniel Duke’s mom Sharon makes sure there is a venue and audience even if it means turning her home into a jazz club for the evening. Rogue Buddha on a small scale, the Dakota and AQ on a larger scale, were crowded with family and extended family who stayed for the full night of music. For the younger musicians, lessons, rehearsals and gigs mean a parent or older sibling is driving... sometimes from distances of 100 miles or more. And then there’s the expense of lessons and college tuition, even with scholarships...

So a big BRAVO to the young jazz musicians who give us faith in the future of the music, to the families and teachers who support every note. And to the venues that host their first professional gigs.
Photos: (Top to bottom) Quentin Tschofen with the Dakota Combo; Daniel Duke; John Raymond; Cory Grindberg and Joe Strachan at MPA's CD release in July; Paris Strother at the Dakota. (Photos by Andrea Canter)
Posted by Canterjazz at 11:09 PM