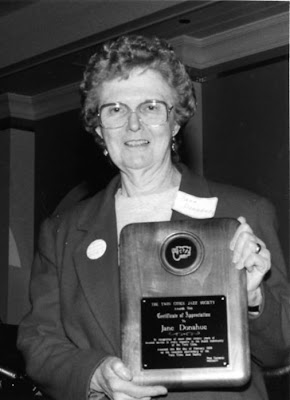 The already too-small jazz audience lost one of its most faithful with the death Friday of Jane Donahue, long-time board member of the Twin Cities Jazz Society and one of the most eclectic in her personal support of the music. At 77, Jane was of a generation that often serves as the guardians of swing and trad, yet Jane was as likely to appear at a Dixieland show as a Michael Lewis gig. Her criteria seemed only to be, like Duke Ellington’s – good music.

To me Jane was the face of TCJS, the first person I met who was active in the organization. And soon I realized she was everywhere – hear a blue note or a spontaneous improvisation, Jane was near by. For years, it was Jane’s phone number that served as the TCJS hotline. If you wanted to promote your gig, you called or emailed Jane (address—jazzyjane@aol.com).

I served the past two years on the TCJS Board with Jane. She helped shape our direction quietly, kindly, but often with a razor-sharp comment that literally cut through the extraneous notes to the core melody. She was the most open-eared of TCJS, far more so than me.

At the TCJS 30th Anniversary party last winter at the Dakota, Jane was cited by TCJS President Lee Engele for her three decades of service—essentially the full history of the organization. She didn’t want the spotlight that night, didn’t want to come on stage. So now we will turn the spotlight on Jane in her memory, some time in the next month, with a grand jazzy send-off.

We know she’s still listening.
Photo: TCJS photographer Don Jackson caught Jane in 1999, receiving an award for then-20 years of service to the organization.
Posted by Canterjazz at 6:00 PM