Inspiration Is a Two-Way Street (Or Is It an Intersection?) 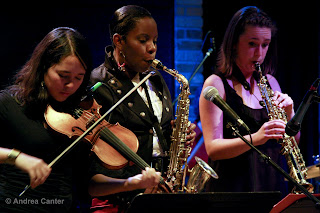 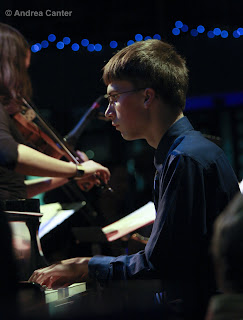 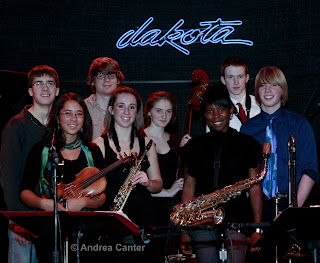 © Andrea Canter
It’s always exciting to see young talent blossom with each note. It seems to work that way every December (since 2006) when the high school musicians of the Dakota Combo rehearse and take the stage with a guest artist, performing in front of family, friends and perfect strangers at the Dakota Jazz Club. Maybe because this is the youngest band in the ensemble’s history (only 2 seniors, and including a 9th and 10th grader), maybe because it is the most gender-diverse of the four bands to date (three young women of the seven), maybe because the instrumentation is out of the ordinary (violin joining three horns and the rhythm section), maybe because it is Adam Linz’s first year directing the Combo....for whatever reason, there was just more voltage in the air this past weekend when the Combo rehearsed and performed with saxophonist Tia Fuller.

Fuller herself is a source of turbulent energy and enthusiasm, still young enough to feel a kinship with serious teen talents and eager for opportunities to promote “the gift” among talented youth. Although her ongoing gig with R&B star Beyonce created an incredibly tight schedule for the weekend in the Twin Cities, she arrived with sax in hand Saturday afternoon (having left the Dominican Republic at 3 am) and within minutes was on the Dakota stage, working with the septet on the tunes they would play together in just a few hours. She had sent ahead charts of one of her sister’s compositions (“Ebonics”), and now she was preparing to solo on pianist Quentin Tschofen’s original, “Neither Here Nor There.” It was more than a rehearsal, it was both a clinic and a collaboration. If anyone was nervous about the evening’s performance—the first major public appearance for the young Combo—it was hard to tell; big grins hide butterflies.

The evening proved magical, nearly every chair in the club filled (many with family, more with friends gathered through Face Book technology, many who were seeing their first jazz performance). Adam Linz watched from a booth but the Combo musicians were on their own, calling tunes, signaling a turnaround or final chorus. Zosha, the 14-year-old violinist, got through her first solo and grinned. Quentin, only a year older, went fully solo on his version of “Monk’s Dream” and brought down the house. Tia Fuller came on stage at the end of the first set for “Ebonics”, and the band surrounded her with competent, if wide-eyed, support.

Quentin’s composition, “Drunken Monkey Framing Company,” opened the second set. Some, like me, wondered if this was an obscure Monk tune. It fit well with the difficult, nonstandard repertoire Adam has introduced to the Combo this fall, the rhythms easily conjuring a tipsy monkey. And how does it feel to have one of the nation’s fast-rising jazz stars play your original composition (“Neither Here Nor There”) on a major club stage? My guess is that Quentin has already written another composition reflecting this moment. By the time the band played the last note of its finale, “Four,” the smiles were beyond the ears. Count Adam and Tia among the biggest grins.

The weekend wasn’t over. The following afternoon, Tia Fuller conducted a clinic and jam at MacPhail, supported by the Combo and involving another 8-10 local student musicians. There were lots of questions, lots of music, lots of smiles. Inspiration moves from student to expert... and back again. It’s a reciprocal relationship.
Photos: (Top to bottom) Tia Fuller joined the Dakota Combo front line (Zosha Warpeha on violin, Ann Buchholz on soprano sax); Quentin Tschofen contributed two compositions to the set list at the Dakota Jazz Club; the Dakota Combo and Tia Fuller after rehearsal (all photos 12/5/09 by Andrea Canter)
Posted by Canterjazz at 1:02 AM