Stringing the Line Between Classical and Jazz 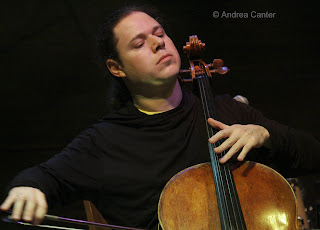 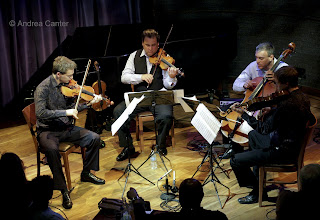 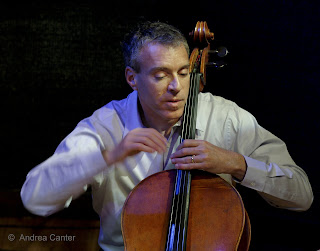 Musicians that typically generate classical, if also ultra modern fare, are finding their way into jazz clubs, jazz charts, jazz sensibilities. Two recent shows at the Dakota Jazz Club, and a small faculty recital a few hundred miles to the south, are good examples of genre-bending from a classical foundation.

I already said a bit about cellist Matt Haimovitz (October 28th) a couple weeks ago, but more seems warranted. He has appeared here as a solo act several times. Classically trained and acclaimed, on any given night his set list might include a Bach Prelude and a Jimi Hendrix tune. His current tour features avant garde singer/songwriter/keyboardist/laptop artist Du Yun who has been performing electronic cabaret. The duo performed material from their recent release, Figment to an audience that might have been expecting a more traditional classical recital or perhaps a more punk rock rebellion. Basically there was not that much of either. What we did get was a 90-minute suite that moved from 21st century experimental music particularly engaging via Haimovitz’ long solos—melodic with harsh fillers of percussive bowing and jagged plucking—to Du Yun’s oddly voiced solo piano, overlaid with heavy reverberations and electronic loops accompanied by eerie vocalizations, even an autoharp. It was an evening of mysterious pitches, haunting bass tones, visually intriguing slapstick antics that put the cello into another universe. Perhaps it was the confluence of John Cage and Cecil Taylor.

The Turtle Island String Quartet (November 12th) is more often heard in concert halls than small jazz clubs, yet their music seems equally at home in a jazz environment as in a classical venue. Bringing improvisation and an amalgam of styles to a classical music foundation, TISQ is the ultimate cross-over ensemble, most recently exploring the works of John Coltrane, which they brought to the Dakota. But even before they got to the much anticipated “Love Supreme,” they took on Chick Corea, John McLaughlin, and Trane himself with “My Favorite Things,” “Moment’s Notice,” and the exceptionally lovely “Naima,” the four strings conjuring at least three horns. Coltrane seemed more akin to Schoenberg than Coleman. But the main event was Coltrane’s masterpiece, now TISQ’s centerpiece, four movements starting with their interpretation of Coltrane’s full solo, the middle movements more classical in form and sound, the finale a prayer. Although lacking piano and drums, the TSIQ nevertheless conjures more voices than the Coltrane Quartet, as each stringed instrument is capable of multiple tones, creating thicker harmonies. But what string quartet sways with the music in time, taps its feet, turns its fiddles into percussion tools?
Cellist Mark Summers would have been a good alter ego for Jimmy Garrison. Summers, the most animated of the foursome, was given a solo spotlight, playing his own “Julio.” He bowed, he plucked, he slapped and danced through what resembled a traditional folk melody, and we forgot it was a cello, not an upright bass. TSIQ closed with Stanley Clarke’s Coltrane tribute, “For John,” adding a lick of “The Girl From Ipanema.” Even the great classicists were not above a few quotes!

A few nights later I enjoyed a faculty recital at the University of Iowa. It was simply titled “Chamber Music” and was led by Volkan Orhon, faculty bassist who has some jazz chops in his arsenal. The evening featured a varied program dipping back to the 17th century and reaching ahead to the present day, with varying combinations of bass, violin, viola, 2 bassoons, oboe, harpsichord, and piano. Two works of note in the context of blended genres: “Duo for Viola and Double Bass” by Tom Knific, himself a bassist and director of jazz studies at Western Michigan University. The second movement in particular was a tapestry of the world of music from Baroque to post bop with flashes of gypsy swing and Spanish folk melodies, aptly titled “The Event.” The other surprise was a world premiere of sorts, a work by Mario Ulloa based on Mozart’s “Alla Turca” for bass and two bassoons. Titled “Um Turco no Brasil,” it crossed cultural as well as musical boundaries, a Middle East Meets Tropics frenzy.