In His Own Sweet Way: Dave Brubeck at 89 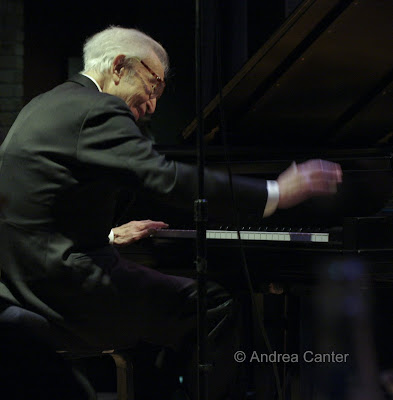 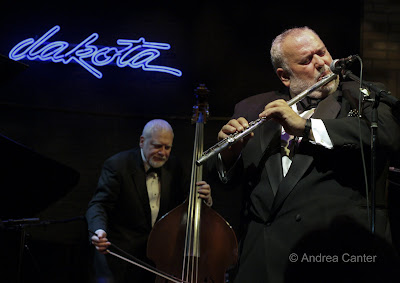 I seem to have a habit of catching jazz legends at the end of their careers –Doc Cheatham, Jay McShann, Ray Brown, Oscar Peterson. Brown was ageless, and fortunately I had seen OP several times over the past two decades. His last performance at Orchestra Hall, about two years before his passing, was more a document of his failing technique than his enduring art. I have now seen Dave Brubeck four times in the past two years in settings ranging from Orchestra Hall to a small concert hall in Santa Rosa to the outdoor amphitheater of the Detroit Jazz Festival... and now this week in the small club space of the Dakota Jazz Club in downtown Minneapolis. A month shy of 89, there is no question that even Dave Brubeck has lost some speed and agility, and his arrangements today defer more to his much younger (though still AARP-eligible) quartet cohorts-- Bobby Militello on alto sax and flute, Michael Moore on bass and Randy Jones on drums.

Yet Brubeck still retains much of what catapulted him to the top of the jazz (and popular music) charts in the 1950s and 60s—a unique approach to time, a keen melodic sense, sustained energy, the art of surprise, and an instant rapport with his audience. All was in abundance on the second of three nights of a rare club date. Already one set into the evening, the Dave Brubeck Quartet was on stage for 100+ minutes of nonstop music. Nonstop save a few of Dave’s stories and quips, starting with the introduction to “St. Louis Blues,” which Dave noted with a twinkle, “starts with a tango rhythm... but not for long!”

Dave on the other hand started with a tango and lasted well beyond swing, showing no signs of fatigue and giving us renditions of favorites that have been adapted to his 89-year-old fingers without losing any of their charms, including a particularly elegant “These Foolish Things” and a closing, humorous “Take Me Out to the Ball Game.” Bobby Militello rates special mention, not only for his agile alto sax but for his startling flute work on “Koto Song.” Initially suggesting the Eastern flavors of Charles Lloyd, his feathery vibrato and elongated swoops became orchestral passages of two and even three-party harmonies (or disharmonies!) paired with his own vocalization, or as Dave described it later, “two or three notes in contrary motion with a singing bassline.”

Brubeck was greeted at the outset with a standing ovation, the audience reverent in the presence of one who has contributed so much for so long. That ovation was repeated 100 minutes later, honoring not only his career, but the continuing vitality of the music and its maker.

I wish I had seen the Dave Brubeck Quartet in the late 50s and 60s. Fortunately that era is well preserved on record. Yet in the 21st century, Brubeck and company still have a lot to say.

Dave Brubeck will be inducted into the Kennedy Center Honors on his 89th birthday next month. See full review soon on Jazz Police and JazzINK.

Photos: (Top-Bottom) Dave Brubeck tops a run with a flourish at the Dakota; Bobby Militello created multiple voices on flute with support from Michael Moore. (Photos by Andrea Canter, November 3, 2009 at the Dakota)
Posted by Canterjazz at 10:36 PM