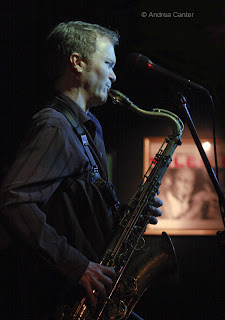 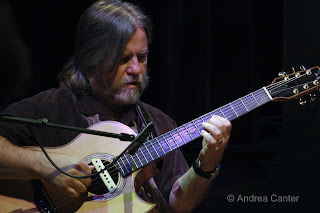 © Andrea Canter
There are a few things you can count on around the holidays – lots of food, family and friends, and special music events. The Twin Cities has spawned more than its share of fine jazz musicians, which means we often have a chance to see them live around the holidays when they return to visit family. This weekend, we have the pleasure of enjoying saxophonist Pat Mallinger at the Artists Quarter. Home for much of the week to visit family in St. Paul, the Chicago resident warmed up Wednesday night and promises that the heat will only accelerate through Saturday night. Based on that preview, it’s hard to imagine a better way to burn off the mashed potatoes and pumpkin pie than by swinging and swaying to Pat’s Twin Cities quartet with Chris Lomheim, Graydon Peterson and Kenny Horst. Soaring on alto through covers of Devil May Care and Poor Butterfly and his own “Hills of Tuscany,” Pat took up the tenor for “Dedicated to You” and Dexter Gordon’s “Fried Bananas.” Lomheim made the most of the new hammers on the AQ’s Yamaha. There’s two more nights of this Bop City titan (11/27-28).

Keyboard fire will be on the menu at the Dakota this weekend as Nachito Herrera cooks up some Havana treats (11/27-28), while Saturday’s Late Night sets cross the globe to Eastern Europe and the elegant interpretations of guitarist Tim Sparks, in trio with Chris Bates and Jay Epstein (11/28). One of the newer venues for music, the Red Stag Supper Club in Minneapolis features inventive pianist/composer Jeremy Walker and his Small City Trio (11/29). And there’s beautiful songs in the air – with Charmin Michelle at Crave in the Galleria (Friday) and Crave in St. Louis Park (Sunday brunch); Maud Hixson and Rick Carlson at the Downtowner Woodfire in St. Paul (Friday) and at the Ingredients Café in White Bear (Saturday). For more avant garde tastes, you’ll find Peter Schimke and Jim Anton trying out some new music at Café Maude (11/27) and Milo Fine releasing a new LP (!) at Rouge Buddha Gallery (11/28).

A highlight of the week for fans of vocal music will be the return of Jane Monheit to the Dakota (11/30-12/1). No longer qualifying as a starlet at 32 (and a new mom!), Monheit continues to prove that a buttercream instrument can mesh equally well with the Great American Songbook and the Global Popbook, as her most recent recordings document. Each outing, she seems to go just a bit further in personalizing timeless songs, making her appealing to just about any listener who favors a beautiful voice.

Coming Soon! Next weekend features the annual Dakota Jazz Club performance of the Dakota Combo, now directed by Adam Linz and featuring the best high school jazzers in the metro area and beyond. They will perform Saturday (12/5) with hot young saxophonist Tia Fuller. Mark you calendars ahead for Laura Caviani’s annual holiday gig, this year at the AQ (12/13); the newly formed "530" band of area college musicians home for the holidays (Chris Misa, Cory Grindberg, Rob Fletcher, Jake Baldwin and guests) doing an early set at the AQ (12/17); CD release from the Atlantis Quartet at the AQ (12/18-19); the Twin Cities Jazz Society’s 60th birthday salute to Birdland with Bruce Henry, Debbie Duncan and Lee Engele at the Bloomington Performing Arts Center (12/20); the annual residency of The Bad Plus at the Dakota (12/25-27); and great New Year’s Eve parties all over town, particularly note the Dakota and AQ for tops in jazz.

Photos: (Top to bottom) Pat Mallinger at the AQ on 11/25; Tim Sparks at his Dakota Late Night debut in July; Jane Monheit (press photo). Photos of Mallinger and Sparks by Andrea Canter.
Posted by Canterjazz at 4:08 PM