Lester Young, Billie Holiday, and Sax in the Afternoon 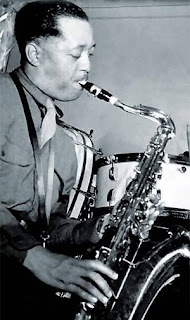 © Andrea Canter
Sometimes there is no correlation between the size the audience and the quality of the music. This past weekend, that was true at concert halls across the metro. JazzMN Big Band, surely one of the most talented large jazz ensembles in the Midwest, welcomed virtuoso saxophonist Ernie Watts and always-ebullient vocalist Debbie Duncan to its season opener in Hopkins, and while the crowd was respectable, it should have been a sell out. I’d track down Watts to hear him again in a minute. And his playful duel with Dave Karr should be on You Tube.

Not too far away, Arne Fogel presented a revue in honor of Johnny Mercer. I couldn’t be in two places at once and neither could anyone else. I heard the hall was about half full despite the marvelous voices of Fogel, Nancy Harms, Sheridan Zuther and Connie Evingson. Maybe they will do a reprise sometime soon.

Sunday afternoons are often preferred for concerts—no conflict with Friday and Saturday nightlife, no late night before a work day, etc. So the Twin Cities Jazz Society always plans at least a couple of its Jazz From J to Z concerts on Sunday afternoons. The season opener at the newly renovated Capri should have been a big draw—the seldom-heard JAZZAX Saxophone Quartet, the Laura Caviani Trio, Charmin Michelle and Dave Karr. Try to squeeze more talent onto a small stage! Aside from the musicianship, the program itself was intriguing, a salute to the great but somehow underrated Lester Young and his partnership with Billie Holiday. The small theater was probably less than half filled. Excuses abound—a Vikings game, a Twins game, a shooting on the north side, too much music already over the weekend. Maybe all of the above.

Those who did turn out at the Capri were rewarded over and over through two long sets of familiar and less familiar tunes, written by, performed by, inspired by Lester Young and/or Billie Holiday—“Lester Leaps In,” “Jumpin’ at the Woodside,” “When You’re Smiling,” “Tickle Toe,” “One O’Clock Jump” were all familiar yet freshly arranged, expertly played. One of the unique contributions of an ensemble like JAZZAX is the wide variation in color produced by the different combinations of horns. Put four tenor saxophones together and you seemingly get a 15-piece big band; put four tenors plus a bari and you have the heavy-weight edition of a big band; put four different sax voices together (soprano, alto, tenor and bari) and you get a full orchestra. Yet other combinations yielded different orchestras-- two tenors versus two altos versus a soprano against the big guys. And often the blend of voices changed within a single tune. In essence, the JAZZAX Saxophone Quartet is the brass equivalent of a jazz choir with multi-part, ever transforming harmonies.
For most of the program there were at least seven, often eight voices on stage, JAZZAX in collaboration with the Laura Caviani Trio (Gordy Johnson and Phil Hey). Their mutual admiration as well affinity for the music and soul of Lester Young yielded one sparkling tune after another, punctuated by multiple savory solos.

JAZZAX leader Dave Milne, who alone is a sax quartet, penned two compositions as well as an arrangement of Young’s “Tickle-Toe.” And he brought far more than music to the stage through his engaging commentary that filled in some of the details and intrigue of the life and times of Lester Young. Part of that intrigue was his relationship with Billie Holiday, channeled at the Capri by the warm voice of Charmin Michelle. Charmin is no Billie imitator, which by itself is refreshing, offering her own charm and silky interpretations of the well known “When You’re Smiling” as well as mining some lesser known gems deserving more attention—particularly “Sailboat in the Moonlight.” You can give me Charmin Michelle and Dave Karr in duo any day, any night.

For me, one of the highlights was the performance of Laura Caviani’s 3-part “Suite Basie,” commissioned a few years ago by JAZZAX and filled with trademark Caviani bluesiness, sweet balladry, and ferocious swing. Everyone had a solo op on the closing Basie tune, “Boogie Woogie.” There was enough energy and enthusiasm to fill a stadium. Too bad the area jazz audience couldn’t fill this small theater.

For those who made it out last weekend, spread the word. Our local musicians are more than worthy purveyors of Lester Young, Billie Holiday, and Johnny Mercer.
Posted by Canterjazz at 12:18 AM