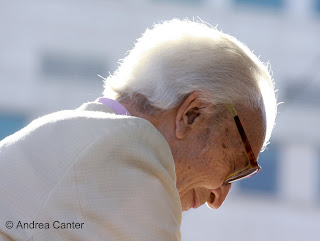 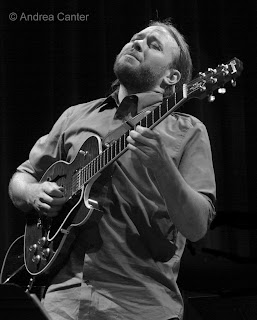 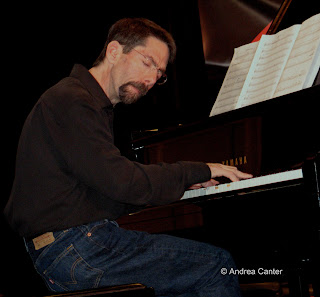 © Andrea Canter
Halloween brings its own treats, but the biggest jazz treat of all will be the three nights of the Dave Brubeck Quartet in the rare, small-club surroundings of the Dakota. At 89, Brubeck may appear frail and uncertain in his steps, but seat him at the piano and much of the old pizzazz remains, in any meter of course. Now with the master for a long tenure, saxophonist/flautist Bobby Militello, bassist Michael Moore, and drummer Randy Jones know Dave’s every move and mood. We’ve seen Brubeck in recent years at Orchestra Hall, and I have been able to catch his performances at a small theater in California and on the outdoor stage of the Detroit Jazz Festival, but never in a small jazz club. And he is 89, we may not get this opportunity again. One set Monday night with proceeds going to support the Dakota Combo, modeled after the Brubeck Institute Fellowship program; two sets per night on Tuesday and Wednesday. Contact the Dakota regarding availability.

Back to Halloween: There’s blues at the Dakota with Bobby Rush; there’s timeless vocalist Carole Martin with the Phil Aaron Trio at the Artists Quarter (Friday and Saturday nights), and a special Halloween late night performance of Herbie Hancock’s Head Hunters music by the always-entertaining Atlantis Quartet, following Rush at 11:30 pm at the Dakota. It might not be scary but it should be memorable! Costumes welcome.

Singers abound around town. Friday night (10.30), Patty Peterson and her trio hold forth at Crave in the Galleria; Saturday night (10/31), Maud Hixson and Rick Carlson move north to Ingredients Café in White Bear Lake; Rick turns up “out west” at the new West End Crave in Golden Valley with Charmin Michelle for Sunday brunch (11/1); Charmin continues her twice weekly gigs at Fireside Pizza in Richfield every Monday and Wednesday night, alongside Denny Malmberg; Debbie Duncan and Mary Louise Knutson entertain at Camp Bar Tuesday nights in St. Paul, where the Jazz Vocalists of Minnesota stage a new showcase event on Thursday (11/5), featuring veteran and up-and-coming performers.

Need something over the edge to take the edge off the week? The Fantastic Merlins hold a CD release party at the Black Dog in St Paul’s Lowertown tonight (10/30); Café Maude in southwest Minneapolis hosts Poutums with Chris Thomson, Adam Linz and Alden Ikeda (10/30); Fat Kid Wednesdays make it hot jazz Mondays (11/2) at the Clown Lounge of the Turf Club in St. Paul, while the Zacc Harris Trio carries on every Monday at the Riverview Wine bar in east Minneapolis. MacPhail’s Jazz Thursdays continues (11/5) with visting saxophonist Greg Ward meeting up with Adam Linz and JT Bates in Antonello Hall. For a good straight-ahead time, Chris Lomheim brings his trio back to the AQ after a long absence on Wednesday (11/3), while on Thursday night (11/5), the Artists Quarter hosts a CD release for saxman Roger James, with a quartet featuring monster pianist Tanner Taylor.

And a very special treat, no tricks, on Thursday with the next installment of REEL Jazz at Bryant Lake Bowl’s theater, sponsored by KBEM: A screening of “Let Yourself Go: The Lives of Fred Hersch.” One of the most prolific recording artists, composers and educators in modern jazz, pianist Fred Hersch is a personal favorite and one often cited by other pianists as a source of inspiration and mentoring. Openly gay and HIV positive, Fred has survived at the top of the art form despite some pretty incredible setbacks. Email Kevin Barnes at KevinB@jazz88fm.com to reserve a seat. (You can view the film and still get to the AQ for Roger James, maybe even catch the last half of Greg Ward at MacPhail.)

Coming Soon: Bruce Henry returns to the Dakota for November 6-7, while Jay Young salutes Michael Jackson and Stevie Wonder at the AQ; the Turtle Island String Quartet is here for a night at the Dakota on November 12th; Lucia Newell salutes Anita O’Day on November 18th at the AQ; Nancy Harms releases a super CD at the Dakota on November 19th, and everything happens on November 21st—second night of Roy Haynes at the AQ, JazzMN Big Band features “Three Tenors” (Pete Whitman, Dave Karr and Dale Mendenhall); Northrop Jazz Series presents Dafnis Preito at the Walker; and Maud Hixson performs at Jazz @St. Barneys. Even I can’t get to all that night!

Remember to set your clock back an hour Sunday morning—that’s an extra hour to enjoy great jazz Saturday night!