Last Weekend, and One More With Kelly Rossum 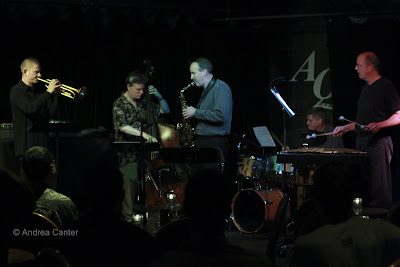 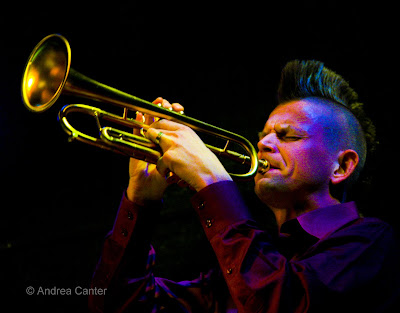 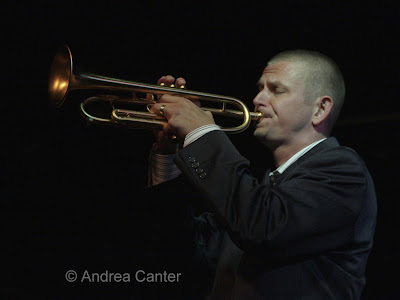 Kelly Rossum is one of those musicians that you appreciate not only for his own music but for the company he keeps. Despite his upcoming move to New York City (this Sunday!), we can hope that he continues to keep good company, both on journeys back to the Twin Cities and in his new home in the Big Apple. Even without the mohawk (shorn – even his head gets a fresh start in NY), Kelly remains one of our most unique and creative voices in modern music.

Kelly’s exit is not without a good deal of trumpet fanfare (or is that fans of trumpet fare?). Last week, Phil Hey turned his monthly Quartet outing into the Out to Lunch Quintet’s “final” performance (I hope he meant final before Kelly leaves town... and not “final,” period.) Their first set at the Artists Quarter included the full presentation of Eric Dolphy’s classic that gives the band its name and inspiration. Dave Milne’s hollow bass clarinet and Tom Lewis’ bowed sandpapery bass shined on “Something Sweet, Something Tender,” while Rossum spewed brassy slapstick on “Straight Up and Down,” like an aural version of Dick Van Dyke’s classic pantomimes of a staggering drunk. The OTLQ is always a playground for these five artists, a chance to see Dave Milne on his arsenal of horns (alto, flute, bass clarinet), Dave Hagedorn’s acrobatics on vibes, Phil Hey all over the drum kit, Tom Lewis busting out of the straight man role. And of course Kelly Rossum, whose trumpet slides, cackles, grins and groans like no other.

The OTLQ was followed at the Artists Quarter by two nights of further mayhem with Kelly in the vortex. Again Phil Hey behind the drum kit, but here augmented by two more of Kelly’s frequent cohorts, pianist Bryan Nichols and bassist (and his replacement at MacPhail) Adam Linz. A set with just the rhythm section soared (both nights) on a handful of Herbie Nichols tunes (why isn’t Herbie’s book more popular among modern ensembles?), some less frequently played bebop masterpieces (Monk’s “Let’s Cool One” and Parker’s “Perhaps”) and a few originals from Bryan, one of the most, maybe the most original keyboard voice in the area. At times it seems that his piano has its own sound track built-in, the full rhythm section in 88 keys.
Bassist often have large hands, but don’t tell Adam Linz, whose smaller weapons cover more territory with more dexterity and grace than anyone I’ve seen. And while a number of musicians tend to subvocalize as they play (usually pianists!), Adam is the only one I hear (and it is easy to hear!) whose audible accompaniment is actually musical if not deliberate. And then there’s Phil Hey who creates more nuances of sound from a standard kit than drummers who bring twice the hardware to the bandstand—be it through deftly alternating brush, mallet and stick in a single verse or dampening a cymbal with one hand while muffling a snare with an elbow or dancing his sticks on a rim.

The centerpiece set of both nights was the CD release celebration for Conflict, a Hey/Rossum duo recorded live as a late night experiment at the Dakota two years ago. The story of the CD title may be part myth and part reality, suffice it to say that there was no antagonism between the musicians, but considerable jousting. It’s a joy to hear but even more engaging live as equal partners carry out their parts of conversations that range from sublime to cacaphonic. Here are two musicians with the capacity make (seemingly) infinite sounds, create infinite moods as soloists, now merging into dialogues that reveal full storylines.

Each night the full quartet played the third set, each musician exploding like the finale of 4th of July fireworks, Kelly spattering notes like an Uzi gone wild. Nothing like going off in a blaze of brass, taking no prisoners, leaving us wanting just one more night.

We get two more nights this weekend at the Dakota, this time Kelly Rossum and his long-standing quartet with Bryan Nichols back on piano, Chris Bates on bass, JT Bates on drums. And as a special send-off tomorrow night, Kelly and JT join German organist Barbara Dennerlein for the 10 pm set. Then Kelly loads up the van and heads east. I hope someone has booked his reunion “tour.”

For a review of Conflict, visit Jazz Police at: http://www.jazzpolice.com/content/view/8511/79/
Photos (top-bottom): Kelly's "last" gig with the Out to Lunch Quintet on August 20th; Kelly with mohawk; Kelly without mohawk. (Photos by Andrea Canter)