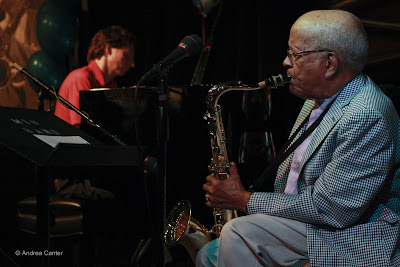 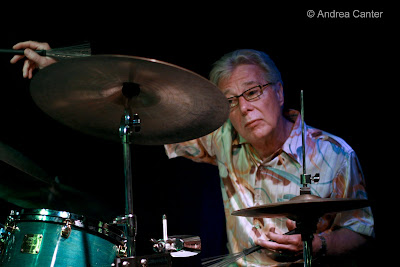 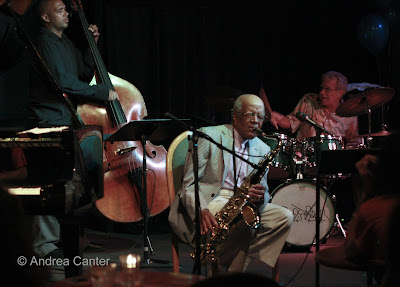 © Andrea Canter
Friday night’s usual trickle-in crowd at the Artists Quarter was mysteriously replaced by a full house at showtime last night. Maybe not so mysterious, given the occasion was the 90th birthday celebration for everyone’s favorite grandpa and saxman, Irv Williams. Barely taller than his tenor and surrounded by “young” monsters in their own right (Peter Schimke, Jeff Bailey and Kenny Horst), Irv, the musician and the man, is never anything short of a giant. Big tone, big heart... naturally a big crowd.

Holding up his ultra-shiny tenor sax, Irv told of a request to donate his long-used horn to the Minnesota Historical Society for its Greatest Generation collection, resulting in turn in a gift of a much more expensive Selmer. “It’s a great horn, but I miss my old one, this one is not as mellow.” Yet I think Irv Williams could make a K-Mart whistle sound as mellow as warmed brandy on a winter night. They don’t call him “Mr. Smooth” for no reason.

The AQ birthday gig covered a lot of Irv’s favorites, from the majestic opening “I Hear a Rhapsody” to the energetic closing (energetic, after two sets ending at midnight), “Softly, as in a Morning Sunrise.” At least outwardly, Irv was as fresh as that morning sunrise, and glowing more.

It’s always hard to pull out highlights from an Irv Williams set, as there’s never a clunker, never a sour note, never a weak tune. “Days of Wine and Roses” featured a lovely opening duet with Jeff Bailey, Irv’s vibrato wide with a Ben Websterish whisper. Bailey starred often, particularly soloing on “On Green Dolphin Street” –melodic, assertive, nimble. One of the most versatile pianists around, Peter Schimke has long been Irv’s musical partner (their duet recording Duo is simply sublime) and their mutual affection shows in every encounter, be it graceful readings of “Besame Mucho” or rhythmic antics of “In a Mellow Tone.” Kenny Horst worked his kit inside out, from sticks to brushes to mallets, and sometimes all three in quick succession, sharply punctuating “Mellow Tone” and softly caressing “Old Folks.”

Irv’s amazing dexterity and lung power not withstanding, it’s the ballads that are his signatures, and two of his favorites are surely mine as well: “Here’s to Life” (which he first heard via Shirley Horn) and his own “Besti’s Song,” my nominee for the most angst-driven ballad in saxophone literature. It’s hollow, haunting, and beautifully tragic.

But it was not an evening of angst, despite Irv’s occasional suggestion that retirement is coming. It’s always coming. Last night, there was cake. Last night, youngest grandson Max came on stage to have a few words with Grandpa. There was the loving standing ovation at the close. We all (even Irv!) sang “Happy Birthday.”

At 90, Irv Williams has many stories to tell, and he’s a bit of a stand-up comic. But he lets his horn do most of the storytelling, and we’re still gathering at his knee for another, and another.

(This is a shorter version of a review to appear on http://www.jazzpolice.com/ and http://www.jazzink.com/. A second birthday bash will be held in Minneapolis at the Dakota on Irv's actual birthday, Monday, August 17th.)

Photos, all from the 90th birthday gig at the Artists Quarter on August 14th, top-bottom: Irv Williams with Peter Schimke; Kenny Horst; Irv with Jeff and Kenny. (Photos by Andrea Canter)
Posted by Canterjazz at 11:42 AM