So ln Love With Bill Carrothers 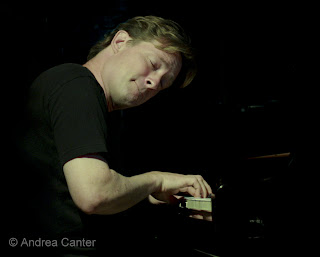 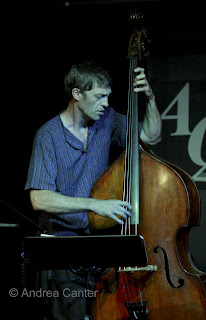 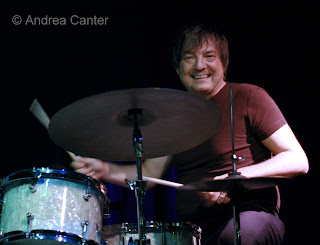 I met Lydia Holsten last night, right before the start of Bill Carrothers’ set at the Artists Quarter with his European Trio, Belgian bassist Nicolas Thys and drummer Dre Pallemaerts. Lydia was eager to see her former piano student before he moved on to a week-long gig at the fabled Village Vanguard in New York.
So what was young Bill like as a piano student? Lydia noted that he was quite young when she first taught him, but the die was cast. “He would play the assigned tune, but then he would do what he wanted with it,” she acknowledged. So, are we surprised? He proceeded to lead his cohorts through an opening set where, even when the tune was as familiar as “Moonlight Serenade,” Bill treated it as another opportunity to rethink, reinvent, redesign.

I can think of few jazz artists working today who have the power to evoke tears, laughter and even confusion with a single phrase from a single instrument. Bill has been jabbing at our emotional as well as intellectual frailties since his first recordings and performances in the early 1990s. Nothing is sacred, not even the sounds of American pop culture. One of his recent releases goes so far as to make modern jazz of such mundane tunes as “Itsy Bitsy Spider,” “Old MacDonald Had a Farm,” and the Oscar Meyer Weiner theme song (check out Play Day on his Bridge Boy Music label).

I’ve enjoyed Bill in numerous configurations but arguably this European collaboration best fits his simultaneously off-kilter and accessible music. The first set Thursday night gave a trademark sampling of Carrothers, ranging from sublime elegance to quirky mayhem, starting with his thickly voiced “Home Row” and ending with the 70s lament of the passing of 50s bliss, “Those Were the Days” (the iconic theme song of All in the Family), taken as a romantic ballad. Ah, those were the days! In between Bill covered the history of classical piano from Bach to Ravel with snippets of Beethoven, offered a swinging version of Clifford Brown’s “Junior’s Arrival” that evoked charging cavalry, pulled “Moonlight Serenade” from a cauldron blending Cecil Taylor and Debussy, and took us back to the mid-19th century with “Jordan Is a Hard Road to Travel,” his fat voicings bouncing like two-handed block chords hitting slightly out of register.

The Belgian musicians were as intriguing to watch as hear—Thys playing one of the deepest bass tones I’ve ever heard, expanding the piano’s voicings; Pallemaerts rarely lost his smile and devilish glint, and rarely paused, his constant motion never distracting as he shifted tools and moods.

There was one jewel after another, but the gemstone of all, to me, was Cole Porter’s “So in Love,” a beautiful tune in most any rendition but filled with little surprises and twists a la Carrothers. Starting out with a prolonged and exquisite piano solo barely hinting at the melody, he was soon rolling chords into triplets and vice versa, playfully reprising snippets of “Moonlight Serenade” before leading his crew back home. And we were so in love.