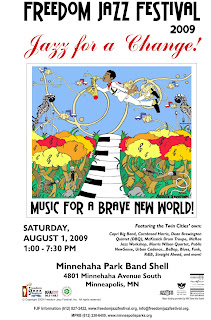 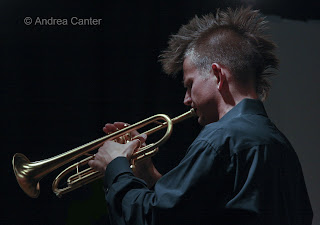 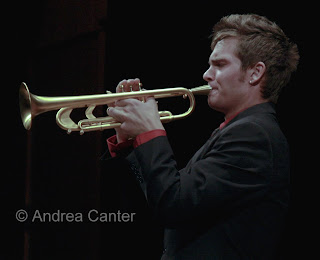 © Andrea Canter
Minnesota Monthly strikes again, this time with the claim that jazz in the Twin Cities is “stuffy.” Maybe “stuffy” now means “stuffed to the brim with diversity.” Take this weekend, for example.

You can start out in downtown Minneapolis with one big horn extravaganza, the Trumpet Summit at the Dakota tonight (8/31). No less that five powerful horns covering classical and jazz idioms, covering maybe three generations of artists take the stage—Kelly Rossum in one of his final Dakota appearances before moving to New York; John Raymond in perhaps his final appearance before heading to SUNY-Purchase for grad studies; Charles Lazarus, one of the top horns of the Minnesota Orchestra who has been straddling classical and jazz for years; special guest and principal trumpet at the Minnesota Orchestra, Manny Laureano. And then there’s 18-year-old Jake Baldwin making his pro debut at the Dakota before leaving home for the New England Conservatory of Music. The Dakota Trio “backing band” fronts for everyone—Tanner Taylor, Gordy Johnson and Phil Hey. Gordy and Phil were on the bandstand at Birdland earlier this summer, backing singer Stacey Kent.

At 11 you have options: Stay put and enjoy another set with John Raymond, this time with his own John Raymond Project featuring another young phenom, Javier Santiago on piano. Or you can race across town at and catch the late set from the Chris Morrissey Quartet at the Artists Quarter as the New York transplanted bassist celebrates the release of new CD on Sunnyside. Of course you can also enjoy this creative foursome (with Bryan Nichols, Michael Lewis and Dave King) again on Saturday night (8/1).

It’s the last Friday of the month to hear Rick Carlson and Maude Hixson at the Downtowner Woodfire Grill. And Friday night brings another stellar combination to Crave at the Galleria when the Laura Caviani Trio meets up with buttercream vocalist Charmin Michelle. Of course you have two more chances to enjoy Charmin as well as some of the best pizza in town---Monday and Wednesday nights at Fireside Pizza with Denny Malmberg.

Bring the family for an afternoon and early evening of fun and outstanding music as the Freedom Jazz Festival returns to Minnehaha Falls Park on Saturday, from 1 - 8 pm. On hiatus in 2008, this annual free event features some of the finest but less visible jazz and blues artists in the area, as well as a few high profilers like Debbie Duncan and Cornbread Harris. The festival celebrates youth and veterans alike. And you are within spitting distance of Sea Salt, the informal park eatery that boasts the best fried oysters between the coasts. The festival ends in plenty of time to get to the Artists Quarter for Chris Morrissey, or take a breather and then head to the Dakota for Late Night, this time with Jeremy Walker’s Small City Trio. Morrissey’s celebration moves to the Clown Lounge for night owls on Monday at 10:30 pm.

Tanner Taylor, one of the best pianists of his generation that I’ve seen, gets out in front of the band twice this week, at Hell’s Kitchen on Saturday and at the AQ on Thursday night (8/6). I’ll try to get to St. Paul after an evening with flautist James Galway and the Cuban explosion, Tiempo Libre at the Dakota. Together they reworked the famed Claude Bolling Suite for Flute and Jazz Trio. Tiempo Libre returns next Friday sans Galway.

August keeps heating up, watch next weekend for the Kevin Washington Quartet at the AQ (8/7 & 8/8), the Bloomington Jazz Festival (8/8), and a CD release on 8/8 from one of the strongest of the new young bands, Metropolitan Port Authority, in port at the Beat Coffee House.
Photos: (Top) Official poster of the Freedom Jazz Festival; Kelly Rossum and Jake Baldwin, the veteran who will be leaving the Twin Cities at the end of the month, and the "rookie" who heads to Boston for studies at the New England Conservatory in a few weeks--master and apprentice at the Trumpet Summit. (Rossum and Baldwin photos by Andrea Canter)
Posted by Canterjazz at 12:58 PM