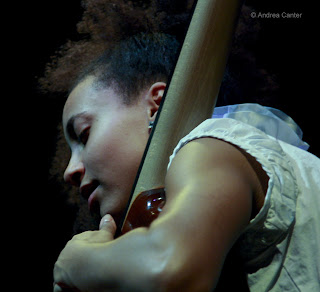 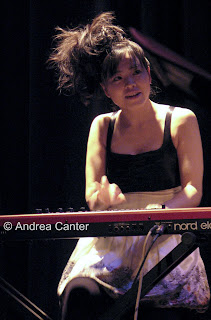 The Twin Cities Jazz Festival might be scaled down but is hardly lesser event. Rather, it’s a more compact affair, geographically and temporally, concentrated now in St. Paul’s Lower town and covering one weekend rather than two. But it is true that good things come in small packages. The festival launched earlier this week with the opening of Visual Jazz at the Grand Hand Gallery, in conjunction with Jazz88 Radio’s “Gallery Grooves.” Over 30 artists are represented, and each painting, photo, sculpture, etc. says something about jazz—directly or metaphorically. The exhibit is open through July 8th. The annual Jazz Night Out seemed successful based on the venues I visited. There were good crowds at Camp Bar for the Jazz Vocalists of Minnesota Showcase, at Great Waters Brewing Company for guitarist John Penny, and at the Hat Trick Lounge for the Jon Weber/Alex Han Quartet.

Opening day was a combination of youth and legend, with the Dakota Combo making one of their last public appearances to kick off music at Mears Park, followed by the Brazilian sounds of Terence Hughes and Phill Fest, Irv Williams getting his upcoming 90th birthday celebration underway, and closing with New Orleans giant Allen Toussaint.

This weekend offers additional opportunities to enjoy Weber and Han. It’s a pairing of pianist/prodigy fully matured (Weber) and altoist/prodigy maturing into adult artist (Han). Both have become popular performers at the TCJF, Weber often in the role of “house pianist” as well as leader of his own quartet, Han now enjoying his third appearance in about five years and, at 21, still enrolled in college at Berklee. At Hat Trick on Thursday and at the Artists Quarter on Friday night, they were buoyed by the rhythm section’s dynamic duo of Gordy Johnson and Phil Hey. Hey returns with them at the AQ Saturday, another bassist will be on stage as Johnson has another commitment. Han brought down the house with his spiraling insistence on “Naima” and songful “I’ll Remember April” in the first set at the AQ. Expect crowds at both Mears Park and the AQ, and expect to be blown away.

Friday night’s festival crowd weathered one downpour between sets and overflowed Mears Park by the time New Orleans pianist/vocalist Allen Toussaint came on stage to receive a city of St. Paul proclamation (naming the day “Allen Toussaintpaul Day”); more marvelous music is scheduled for the second full festival day (6/20) – the young energy of a Walker West ensemble, the edgy sophistication of The New Standards Trio, Weber and Han, and yet another prodigy turned pro, bassist/vocalist Esperanza Spalding. She performed to an SRO crowd at the Dakota in March so best plan to arrive at Mears Park early in the afternoon to guarantee sitting. Plan to spend the day (from noon til dark)—the concessions include some great tacos and other treats this year.

The festival ends Saturday but more giants of modern jazz keep the spirit alive in the coming week. Japanese pianist Hiromi and her Sonicbloom Quartet return to the Dakota (June 21-22). We first saw Hiromi at the 2004 festival and were dazzled and dizzied by her Tatumesque speed and inventive compositions. Time has only matured her talent. Right on her heels comes Karrin Allyson, returning to quasi home turf at the Dakota (June 23-24). A one-time area resident, Allyson has a voice like no one else, and is equally adept at English, French and Portuguese lyrics.

Barely cooled off from Weber and Han, the Artists Quarter prepares for a volcanic week with the Tuesday Night Band (on Tuesday of course), the Phil Hey Quartet (6/24) and the Bryan Nichols/Adam Linz/Phil Hey Trio (6/25)—and then it’s Happy Apple coming in for three nights over the next weekend. Multi-saxman Chris Thomson joins Nichols and drummer Tim Glenn at Café Maude on Saturday (6/19).

There may be some tickets left for Sunday’s performance at the reopened Capri Theater, Saturday is sold out. Charmin Michelle, Debbie Duncan and Dennis Spears, with the Wolverines Trio, salute “Legends” Ella Fitzgerald, Lena Horne and Joe Williams. And now that she’s back from Spain, Charmin will again be serenading at Fireside Pizza, Mondays and Wednesdays.

Coming soon – Happy Apple at the AQ (6/26-28); Bruce Henry at the Dakota (6/26-27); the Karreim Riggins Experience with Mulgrew Miller at the Dakota (6/28); Charles Lloyd with Jason Moran at the Dakota 7/2; the Iowa City Jazz Festival on 7/3-5. (Only a five-hour drive—to see David Sanchez, Lionel Loueke, Chris Potter’s Underground, Bill Frisell and Dave Holland!)
Photos: (Top) Alex Han at the Artists Quarter June 19th; Esperanza Spalding during her recent gig at the Dakota; Hiromi during her 2007 show at the Dakota. Photos by Andrea Canter
Posted by Canterjazz at 12:49 AM