Karrin Allison: The Best Of 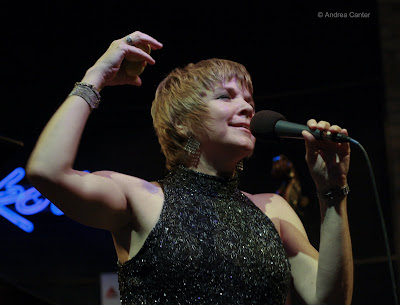 I recall that the last time Karrin Allyson performed at the Dakota in April 2008, I thought it was the best set I had heard from her yet, and that was certainly saying something given her long history of engaging performances.

But now, her opening set on Tuesday was surely the best I have heard from her yet. I don’t think I am losing my powers of discrimination or succumbing to the “halo effect.” I think, as good as she is, she just keeps moving forward. And regardless of material—in advance celebration of the release of her Best of Karrin Allyson on Concord, Karrin’s set covered familiar selections from her diverse repertoire, nothing we had not heard before, yet everything sounded as if she was giving it an inaugural performance. And of course that is the hallmark of a top artist.

There may be many clues to her trajectory in analyses of her intonation, phrasing, song selection, etc. But to me the key is a growing confidence and enjoyment in performing. I recall one of the first times I heard Karrin at the Dakota, she was distracted by the auto focus beam of a new digital camera, by clanking silverware; she seemed intense to a point of inhibition. Each year she returns with more joy. Her performances now are not only fun for the audience, they seem to be fun for Karrin Allyson. At the same time, the gigs seem less like gigs and more like musical conversations among friends. Which they clearly are. This week, instrumentation was pared down to guitar and bass, along with Karrin’s own accompaniment on piano for part of the set. (I heard that for the second set, pianist Laura Caviani accompanied her pal Karrin on a couple of tunes, marking Laura’s first stage appearance since cutting her hand badly in a car accident in May. Bravo!)

Without drums, with longtime cohorts Rob Fleemans and Larry Kohout, Karrin was truly home. You could hear it in every note, from her stellar blues (“I Ain’t Got Nothing But the Blues”) and Jimmy Webb’s “The Moon Is a Harsh Mistress” (one that she has not recorded), to her bilingual romps (including the always-requested “Patout” as well as Jobim’s “A Felicidade” and “Double Rainbow), to the wryly humorous “Robert Frost” (digging back to Collage) to her heart-rending Elton John ballad, “And So It Goes.” Unflappable, unassuming, unfettered. Nothing but the “best of.”

She’ll undoubtedly return next year. Undoubtedly I will repeat myself.
Photo: Karrin Allyson at the Dakota on June 23, 2009. (Photo by Andrea Canter.)
Posted by Canterjazz at 8:56 PM