Marcus Roberts: Genius Past and Present 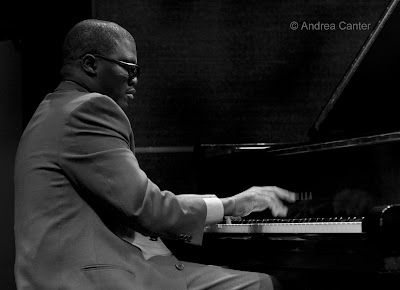 Earlier in the day, he had served as a special guest judge of the annual “Jazz Piano Scholarship Competition” for high school students. Three very talented 18-year-olds performed on the stage of the Dakota Jazz Club, their efforts critiqued by two of the finest pianists in the area—Mary Louise Knutson and Tanner Taylor. And one of the finest pianists anywhere, Marcus Roberts. Roberts was constructive but firm in his comments, encouraging the young artists—each already well advanced beyond his years-- to add more rhythmic and dynamic diversity, to consider more space “like Ahmad Jamal,” to “listen to drummers” and expand their “knowledge of the language.” “Remember you can play bebop melodically like Charlie Parker or Bud Powell.” Most of all, Roberts encouraged the pianists to learn the history of the music and integrate that history into their own work.

A few hours later, Marcus Roberts himself was on the Dakota stage, giving life to his teachings. As he has throughout his career, he unearthed the history of jazz as a foundation for improvisations and original compositions, and in solidifying the genius of the past, created a new meaning of genius in the present. Scott Joplin, Jelly Roll Morton, Fats Waller, Pete Johnson, George Gershwin, Duke Ellington, Thelonious Monk, traditional gospel—much of the music of the 20th century informs every note, every chord. Not just the set list, but within each tune within each set, Roberts echoes the giants of rag, stride, swing and bop, while at the same time serving up improvisations as much in sync with 21st century masters like Mehldau and Moran.

“Vary the dynamics!” “Make more use of the left hand!” “Learn the language!” Roberts started his first set fully charged with Jelly Roll Morton’s “New Orleans Blues,” left and right hands in full collaboration as he journeyed back and forth from pianissimo to forte and all points in-between. Fats Waller’s “Jitterbug Waltz” was a model of gymnastic precision yet also a launching pad for a Monk-inspired riff suggesting “Misterioso;” Monk himself inspired Roberts to stride-infused variations (“In Walked Bud”) and speed-demon demonstrations of crystal clear articulation (“Ba-Lue Bolivar Ba-Lues-Are”). His “Cherokee” coaxed a symphony orchestra from the Yamaha grand—a full verse of solo left hand that continued its patterns as the right hand took charge of the melody, then double-timing the third verse, then moving ahead an octave as if each hand led its own section of strings and horns. Gershwin’s “Our Love Is Here to Stay” perhaps best reflected a tradition transformed, with the swing feel of the 20s and 30s evident in Roberts’ 21st century voicings and conceptualizations.

Marcus Roberts has established himself as an original interpreter of the most original composers, which perhaps has obscured his own talents as composer. Particularly his first set at the Dakota provided ample opportunity to remind us that his reverence for jazz tradition informs—but does not constrict-- his own writing. “After the Party Is Over” conjured Bach as much as Monk; “Hidden Hues” suggested the delicacy of Bill Evans with ragtime syncopation, while “Finding Common Ground” seemed to bring forth the entire history of jazz piano.

Perhaps Roberts’ long association with outspoken classicist Wynton Marsalis, as well as his technical affinity for stride and swing, makes it easy to overlook the magic he brings to both traditional and modern repertoire. But consider the recordings he lists (on his website) as his own favorites—not Joplin, Waller, or even Ellington, but from the 50s and 60s: Monk’s Dream, Ahmad Jamal’s Cross Country Tour, Miles Davis’ Complete Concert 1964, Coltrane’s Crescent, and Ella and Louis. Of Monk, Roberts notes the “abstract harmonies with melodies drenched in folk blues and swing;” of Jamal, he cites the “elegance and intelligence” of the arrangements; of Ella and Louis, he notes “such soul, such beauty, and such magical syncopation...”

Photo: Marcus Roberts at the Dakota on May 17th. (Photo by Andrea Canter)
Posted by Canterjazz at 11:51 AM