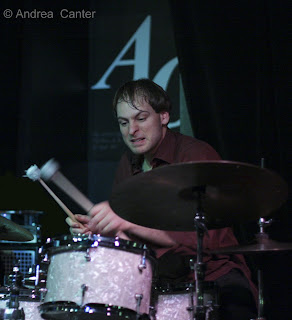 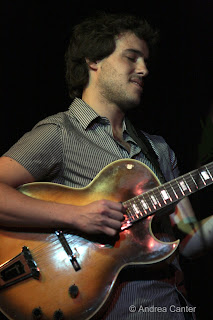 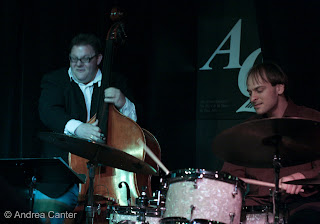 Look up “music” in the dictionary and you might find multiple definitions, but all refer to “sound.” You can enjoy and perform music without sight, and certainly there have been profound musical talents throughout history who are blind. Marcus Roberts is a good example among recent visiting jazz artists. Sight, however, adds another dimension to the experience, at least for those in the audience.

Among jazz drummers, there are those who prompt us to close our eyes and concentrate on the rhythms. Then there are those who must be seen as well as heard to fully appreciate the passion underlying their art. To close one’s eyes would reduce the potential enjoyment. I have a growing list of jazz drummers for whom I want good sightlines as well as acoustics. Locally there’s Jay Epstein, JT Bates and Dave King. Nationally there’s Winard Harper, Steve Smith and Ari Hoenig.

Hoenig made his third appearance at the Artists Quarter this weekend but his first leading his own ensemble, without piano. And he could not have asked for more sympathetic partners—Israel native, New York transplant Gilad Hekselman on acoustic guitar and Twin Citian Adam Linz on bass. Each of these musicians puts a high value on melody as well as rhythm, on interaction, on emotion. Standards like “Sweet and Lovely” and “The Way You Look Tonight” were as fertile points of departure as were originals like Hoenig’s “Painter” and “Seraphic.”

Ari Hoenig is as much an acrobatic entertainer as percussion magician, and his efforts can conjure the sleight of hand. A juggler, he seamlessly moves from sticks to brushes to mallets to the use of an elbow to dampen the skins. At one point in the first Friday set, a stick flew in the air, and without missing a beat, another mysteriously appeared to continue the patter. Ari pulls sounds from every inch of the trapset, and beyond, taking his sticks to every rim and in one instance reaching out to tap on Adam’s bass. He even used his hi-hat stand like a rainstick. He has a wide repertoire of scrapes, skitters and squeals akin to a trumpeter’s artillery. And to as great an extent as any drummer I have heard, he executes within a wide range of volume and pace, often shifting gears with sudden grace and precision. His range of gleeful, maniacal expressions suggests a small child in the freeing moments of joyful discovery, an unbridled passion for his work. The drum kit is itself the playground and there are no rules, just unlimited opportunities.

The strings, too, had plenty to say (and when Adam is into the zone, he has plenty to sing while his fingers fly and slide). But the drums said everything and more. Once local drum master Phil Hey noted that a careful listener could pick out the melody implied by a drummer’s patterns. I thought he was referring to rhythm and also that one might need to be at least an accomplished musician to actually identify tunes based on the drummer’s part alone. But maybe Phil was describing Ari Hoenig. Twice over the weekend I heard Ari present a long introduction to Bobby Timmons’ “Moanin.’” And we knew it was Moanin’ because every note was sounded by the mallets striking the drums. Not just the rhythm. Every tone. And I swear, he threw in little riffs of Grieg’s “Peter Gynt.” When guitar and bass joined in, it was to engage in a call and response among three melodic voices.

With eyes closed, it surely sounded magnificent. But with eyes open, I could confirm that this magic came from one drumset, one man, one brain. And I could see the joy it brought to him... as well as to us.
Photos: (Top) Ari Hoenig; Gilad Hekselman; Adam Linz with Ari Hoenig. All photos from the Artists Quarter on May 29th. (Photos by Andrea Canter)
Posted by Canterjazz at 5:49 PM